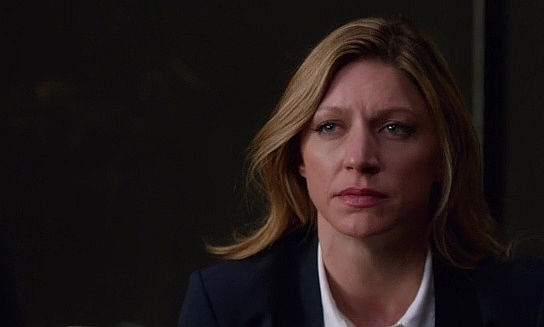 Seriously, Ava, what the hell is wrong with you?

After what’s becoming the usual longer than normal mid-season hiatus, the Legends of Tomorrow return, taking the time-slot vacated by Black Lightning. It’s good to see the crew of misfits again, as they find ways to “screw things up for the better.” Things get off to an emotional start for my favorite couple on the series as they go south of the border in “Lucha de Apuestas.”

In 2019, Sara and Ava return the possessed puppet to the Time Bureau. Gary takes charge of it while Hank bitches out Ava for going in the field with the Legends. The newest crisis revolves around Mona apparently letting Konane, the Hawaiian demigod, out of his cell in the Bureau’s holding area. Heywood’s ire sets Ava Sharpe off on a guilt trip. She sends Gary to the hospital to interview Mona. Considering how her parents are acting, Mona would probably rather face the Time Bureau inquiry. Mona and Gary fight, and she gets away after turning one of the gadgets against the geekiest agent.

In the parking lot, where Mona is moving really well for someone with her injuries, she meets up with Konane, who is worried about her. Their reunion gets interrupted by the mysterious Men In Black, who seem hell-bent on recapturing him. Konane is now actually managing the occasional word, like Mona’s name, and she uses a Time Courier to send him away, then smashes it before the bad guy can find him. The ones who actually find her are Ray and Rory, but she’s not in the mood to cooperate with them, either. Rory ends the debate in his usual direct fashion.

Back on the Waverider, Mona tells the team what really happened, and they’re extremely doubtful. Mona goes off on a long X-Files riff, which annoys Rory and gets Ray to shush her. Sara finally agrees to a compromise that doesn’t really please anyone. Zari holds Sara to her word, and Gideon finds something amiss in 1961 Mexico City. Sara, John Constantine, Mona, and Rory go to a Luchador match, and find out what Konane has been up to. Charlie complains about missing the fights because she’s on the Waverider (why she has to be there, we never hear), and John meets one of his heroes, who isn’t thrilled with Konane’s new career.

At the Time Bureau, Nate is dealing with trying to keep a handle on things, his mother fretting over a charity gala that night, and then catching sight of Zari sneaking around. The team watches the wrestling match, with varying reactions. Mona is happy to see Konane in his element, while Rory is more concerned with capturing the magical being. Nate and Zari have a tense confrontation about why she’s there, and Nate gets some bad news. Sara wants to use Mona for bait to capture Konane, but things go off the rails when El Cura, John’s idol, challenges Konane to a high-stakes match, and the crowd devolves into chaos.

Mona finds where Konane has been living, and they enjoy each other’s company. Nathaniel and Zari talk about what’s going on at the Bureau, and figure out what they need to do next to investigate the potential problem. Zari acts a bit odd about having to pretend she’s dating Nate. Well, far as I can remember, they are the only two who haven’t had a serious relationship on the show yet. Mona and Konane’s evening together gets interrupted when the team shows up and things go downhill.

Sara is impressed with Zari getting ready for the night’s events, and Zari brings her captain up to speed on what’s going on. Gary wanders in to the Time Bureau, somewhat the worse for wear, and alerting Ava that all is not well. Things get worse as the Legends have Konane in holding on the ship and debate what to do next. Ava holos in and sees how much Sara isn’t telling her. That doesn’t exactly do wonders for their relationship. Sara gets dressed up, too, in order to try and get to Ava at the gala and reluctantly leaves Ray in charge. Charlie and John are saved from Ray’s team building exercise when Gideon detects more problems with the timeline back in ’61. This puts Ray in a bad position and leaves him with a decision to make.

At the gala, Zari makes some good observations about refreshments at big parties and then suffers through Nate’s mom thinking she and Nate are together. Sara and Ava get a dance number/conversation/interrogation. Constantine gives El Cura a pep talk, and Mona brings in Konane to prepare for their special bout. When Mona’s trying to talk Konane into cooperating, she quotes one of Rory’s books of all things, both amusing and disconcerting the anonymous author. Sara and Ava argue about how to handle things, and one of the agents actually causing the problems overhears this. Nate reluctantly agrees to work with Zari and helps her get an important piece of evidence.

Sara gets back to the ship and is ticked that Ray has taken action without her, although he really didn’t have a choice. She tries to call Ava and give the team some room to work, but Ava isn’t listening. All the progress Ava seems to have made towards loosening up seems to have completely gone away. I wonder if she got re-cloned during the hiatus? The team sets the wrestling match in motion, with Ray somehow the referee, and Ava’s agents move to capture Konane. This isn’t looking good for anyone, really. Zari and Nate get Hank’s phone, and Nate gets more bad news.

The wrestling match seesaws back and forth and then gets interrupted when the Agents try and shut it down to capture Konane. Things break down into a general brawl, although Constantine shows his priorities with proper beer bottle etiquette in a fight. Charlie plays rabble-rouser, stirring up the crowd. Sara tries to explain what happened to Ava, but she’s not inclined to listen. Nate and Hank have a very inconclusive scene, and Hank leaves to take a call and get some unwelcome news.

Rory tries to give Mona some advice, but she isn’t going to listen.  I likely wouldn’t take advice from an arsonist thief either. Sara tries to make things up with Ava, but Ava has seriously drunk some company Kool-Aid and is espousing some seriously dark ideas that shock Sara. Ava does seem to have gone through a seriously dark character shift all of a sudden, which makes about as much sense as Cisco’s anti-meta turn on Flash. They argue and Ava says some things that Sara certainly regrets. Mona comes to a hard decision, but it gets taken out of her hands and there are several big surprises in the last few minutes of the show. I didn’t see them coming, anyway.

What I liked: The crew is back, and just as nuts as ever. The developments with Hank are interesting and I hope Nate handles it ok. I admire Sara’s determination to do the right thing. I’m both surprised that John’s a wrestling fan, and somehow it seems to fit. The wrestler El Cura, reminds me of a similar character on the Strain, and both are likely based on El Santo, an actual wrestler who starred in movies fighting monsters. I’m glad Mona was strong enough to stand up for her beliefs. That final scene sets up a few interesting things. I’m pleased Nate at least listened to things he didn’t want to hear.

What I didn’t: Ava’s sudden personality shift came out of left field. If we don’t find out later that’s due to some kind of outside interference than it’s some really weird writing choices. This episode played to no one’s strengths. Sara didn’t fight, Ray never donned his suit, John did no magic, Zari never used her amulet… you get the idea.

As glad as I am to see the team back, this wasn’t their best outing. I’m giving it a low 3 out of 5.