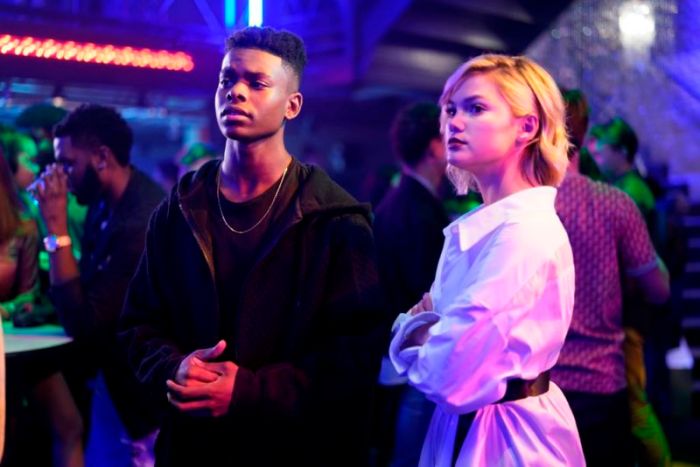 After what felt like a really long break, Cloak and Dagger comes back for a second season with a two-parter that starts with “White Lines.” Tandy and Tyrone essentially switched places at the end of last season, and they’re both trying to adapt to their new circumstances. Their ally, Detective O’Reilly, didn’t exactly end the season on a high note, and she’s having some complications as well.

The show opens with Tandy catching up on the ballet classes she missed during her period of homelessness. She’s still behind the curve, as we can see from her having to tape up her shoes. Tyrone, for his part, is wandering the streets, spying on drug dealers and using his powers to keep an eye on the thugs and then enact a… financially punitive form of vigilantism. To highlight the dichotomy of their powers and lives, all Tandy’s scenes are in daylight, while Tyrone’s are at night.

Credit where it’s due, they aren’t saying everyone’s problems were solved at the end of the season. Tandy and Melissa (her mom) are in a group therapy class, working out their problems and listening to the others. Melissa has made a lot of strides in acknowledging her problems and Tandy is making headway accepting things. We also see a good bit from Mikayla, a woman there with an abusive boyfriend. I thought Tandy was backsliding to her old ways when Mikayla dropped her wallet, but Tandy did a good deed… mostly.

O’Reilly is clearly not over her own traumas, as we see from her performance on the shooting range. Frustrated, she goes back to her car, pops some pills, and nearly gets a heart attack when Tyrone teleports into the backseat. After some apologies, Tyrone shows her what he’s been up to, and she’s not pleased. At all. Their conversation flows naturally, but also reminds viewers of the legal issues plaguing Tyrone. O’Reilly urges him to go back into hiding and stop “helping.” Tandy tries to help Mikayla at the end of their meeting, but she’s clearly not interested.

Tyrone, not one to listen when he thinks he’s doing the right thing, is marking up a map of gang territories in the city. His hobby gets interrupted when Tandy drops by. They banter about the run-down church, and being restless. One of the best parts of the first season was the interaction and chemistry between Tyrone (Aubrey Joseph) and Tandy (Olivia Holt). They do a great job of showing the two as friends and not falling into the pitfalls of so many shows with having the leads get romantically involved. They both claim they’re doing a lot better than they actually are.

Tandy and Melissa get a very warm and entertaining scene of mother/daughter bonding over the inexact measurements in cookbooks. Melissa pushes a little too far and Tandy makes up an excuse to get out of the house. Tyrone uses his powers to blink around the city and check in on his parents and Evita, his girlfriend, more or less. Tandy follows Mikayla home to see the situation with the abusive boyfriend for herself. While Tyrone provides a voiceover about thermodynamics from the homework Tandy brought him (seriously, who ends up homeless and asks a friend to smuggle them homework?), he goes after another group of dealers while Tandy leaves abusive Jeremy a very pointed message to leave Mikayla alone. Tyrone gets cocky in his mission and, reversing the stereotype, Tandy saves the day.

Back at the church, Tandy is mad that Tyrone is off playing vigilante without her. Tyrone explains why, and he has some decent reasons. He also admits he’s not handling the isolation as well as he told her at first, which is fairly obvious. They go from being open to having an argument, and she ends up storming off. Tyrone pays a call on O’Reilly, leaving her a note, and sees her get a call about the gang war he’s unintentionally pushing the bad guys towards. O’Reilly pops another pill, which is getting worrisome. Tyrone looks on from the fire escape.

At the group, Tandy gets a demonstration of the law of unintended consequences when Mikayla updates them on her status. Tyrone dribbles at the church while Tandy dances as they try and burn off some tension. He finally teleports to her, apologizes, and asks for help. Going back to the church, Tandy and Tyrone have a more honest conversation and address some of his laundry issues, and Tandy tells how she handled it. Their conversation drifts from fashion to preferred handholding as Tyrone shares some of what he overheard at O’Reilly’s place.

Tandy charms them into the underground club where the gangs are going to have a summit. Tyrone’s big plan is ‘porting in to the backroom and taping a recorder to the bottom of the table, to get the evidence O’Reilly was lecturing him about. Since they have to wait for the meeting to start, and then end, they end up hanging around at the club. Tandy teases her partner about actually having a good time, and there are some entertaining scenes of the evening. Things go downhill fast when Tyrone sees that the summit isn’t going as anyone expected. The episode ends with our heroes making a grisly discovery.

What I liked: Just about everything, really. Tyrone and Tandy play really well off each other. I like that they’re problems from last season are progressing, but weren’t instantly fixed. It’s good to see them both getting better with their abilities. They’re still different from their comic book versions, but they’re internally consistent. Tyrone using his powers to both check in on his loved ones and harass the gangs made a lot of sense. Tandy’s simmering issues that she’s not quite acknowledging also make a lot of sense. Like last season, they manage to include enough of New Orleans to give a feel for the city without relying on stereotypical stock shots.

What I didn’t: Actually, not much. Aside from O’Reilly’s weirdness at the end of last season not really being directly addressed yet, I thought it was a damn good episode.