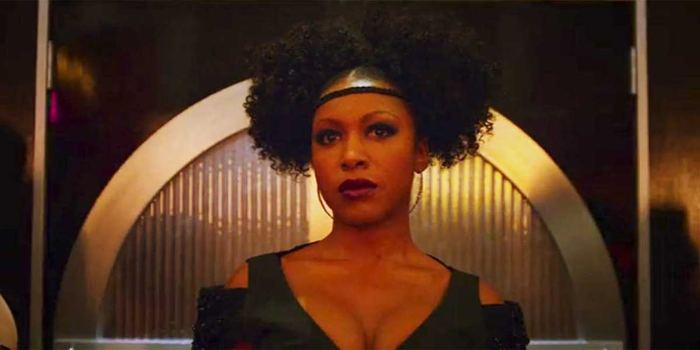 Tilda’s new and familiar look is one of many stories we won’t get to see.

Luke Cage’s second season, and sadly the series, come to an end in “They Reminisce Over You.” I’ll talk more about the end later. I will say there were a lot of surprises and twists along the way, most of which I didn’t see coming. Since it’s both a season and series finale, there will be spoilers below.

The episode starts in court, where Mariah and her slimy attorney Ben Donovan, are arguing for bail. Opposing them is DA Tower, who has been on several different Marvel/Netflix shows. That’s one of the things I’ll miss about these series: just like the larger MCU, the shows were so nicely and neatly interconnected. Mariah is smug and overconfident, and manages to strike all the wrong notes with the judge. Misty and Luke enjoy seeing Mariah taken down a few pegs from their spot at the back of the courtroom.

A news show provides voiceover as Misty ends up in a running gunfight on the streets. Apparently, some of Mariah’s claims were halfway true, as they report that since she was jailed, crime is up 75%. DW is packing up the barbershop as Luke comes in, hoodie smoldering. They talk about the situation on the streets, and Luke feels like he’s being blamed, since he helped put Mariah behind bars.

Tilda is working on a new concoction in her shop when Misty comes in. Misty is definitely on the job, and Tilda gets worried. Misty is looking for Bushmaster, and Tilda is claiming ignorance, not very persuasively. Tilda starts protesting about her rights, and Misty says how much Tilda sounds like her mother. As soon as Misty leaves, we see she was right, when Bushmaster lurches out of the back room, helped by Sheldon and Auntie Ingrid. Tilda gives Bushmaster something to help him, and recommends rest. Bushmaster, half-dead, still won’t give up on his vendetta, telling Tilda that Mariah needs to burn.

Back in the barbershop, Luke holds a council with Sugar and DW about what’s happening in Harlem. Shades surprises them, coming in the back way. Shades has advice and points out why he doesn’t have a dog in this fight anymore. Shades and Luke are brutally honest with each other, and Shades actually has some useful information. Shades leaves after a few threats are exchanged.

Mariah has a scene in jail with a lot of sudden twists. It shows exactly who she is when she’s not playing for an audience. Luke pays a visit on Rosalie Carbone, Italian crime boss who in the comics is part of the Punisher mythos. Luke is a lot more brutal than normal, and, while Rosalie is hard to rattle, they do come to a kind of understanding. The running joke about Luke and coffee is repeated here. Bushmaster gets a very unexpected going away scene with Tilda, Ingrid, and Sheldon. It’s an odd way to leave a major antagonist for the season. Tilda states she’s not paying for her mother’s sins anymore.

Mariah and Donovan meet in the attorney/client conference room, where Donovan assures her they aren’t being recorded. Donovan has some concerns about the upcoming trial, and Mariah reveals her latest devious strategy, to be enacted after more murder. I guess she has a go-to answer for most problems. Bodies start piling up on the streets, keeping Misty very busy and making her worry about Shades, who she can’t reach. A desperate Alex, Mariah’s former assistant, slips in to Tilda’s shop, begging for help. She says she can’t give him any, and they both agree on Mariah’s dangerous charisma.

Cage returns to the elevated garden we’ve seen him in a few times now. He and Sugar talk about how Luke doesn’t meditate and Mariah’s current purge. We also get some background on Sugar, explaining his involvement with the Stokes family. Luke speculates on ways to keep the peace, and Sugar utters a phrase I never thought I’d hear, “kick-ass Kissinger.” They agree that both Mariah and Luke love Harlem. One of Mariah’s thugs makes a run at Shades, but the gangster isn’t that easy to kill, and takes the man’s phone to demand a meeting.

Detective Bailey and Misty work more murder scenes, complete with grieving family, as Mariah’s onslaught continues. Shades manages a meeting with Mariah in the jail, and they have an unpleasant talk. Shades points out ways all this could have been avoided, and I think he’s actually telling the truth. He’s dangerous and slippery, but I do admire his mind and his survival instincts. He leaves on a bad note, Mariah has an unexpectedly emotional reaction, and Donovan comes back in with news of another person wanting a meeting.

Luke and Misty are at yet another murder scene, and this is one that surprises Luke. Misty comments there is no like in Mariah. Luke asks if she can get him in to see her, and she refuses, but with a few decent reasons. Luke says he understands, but steps away to call Foggy to pull a few strings. Tilda is back at work, making up something that bodes ill if you have the right language skills.

Tilda and Mariah have a visit, with Mariah continuing her self-justifications. Tilda isn’t having it, and holds her own in the conversation. Mariah is just smug and can’t conceive of someone not agreeing with her. She’s damned annoying. The meeting ends on what could be a friendly, or at least conciliatory, note, but somehow doesn’t come across that way. Mariah knows something’s up, but refocuses when Donovan comes back in with news of yet another meeting.

Luke wanders the streets in what really seems like a pointless sequence, while Tilda heeds one of her mother’s requests, moving through Harlem’s Paradise. She sits at the keyboard for a very ominous, original song, while Luke wanders around more, Misty works out on the heavy bag, and Shades looks at an old picture. It’s definitely some foreshadowing.

Donovan is uncomfortable with Luke and Mariah meeting, and leaves at Luke’s barbed suggestion. Luke and Mariah talk about Luke’s new role, Mariah calling him a gangster, while he prefers sheriff. Here’s a hint, Luke, sheriffs are elected. Remember that later. Mariah pays a few grudging compliments. The interview comes to an end in a very surprising way, and Mariah just barely has time to figure out what happened before an unexpected end. Luke is an odd mix of compassion and ruthlessness here, but it works for him.

The Bulletin, the paper Karen Page works for, runs the headline “The Witch Is Dead,” which Shades reads in a diner. Misty comes in with some bad news for him, illustrating the perils of not reading the fine print and pissing off your lawyer. Misty and Shades agree that Mariah was a crazy bitch.

Tilda meets with the funeral director we’ve seen before for the disposition of Mariah’s body, and she’s very, very cold. She’s also definite that she won’t be using the Stokes name, which I don’t blame her for at all. Sugar, DW, and Luke talk about Mariah’s death, all with mixed emotions. They get a surprise visit from someone, with an equally surprising pronouncement. DW isn’t happy about the direction things are going, and makes his own decisions. It’s not one Luke likes, but he does respect it. Donovan comes in, saying he needs to talk to “Mr. Cage,” and the two leave together. DW makes a final plea as Cage leaves, but, as Luke puts it about the situation, “Someone has to do it.”

Donovan has the latest version of Mariah’s will, and there are more surprises to come. Her money is going to the charity she was setting up before Bushmaster started redecorating with severed heads. Tilda gets Cottonmouth’s keyboard. Luke, to everyone’s surprise, gets Harlem’s Paradise. You can imagine Tilda’s reaction. After Tilda storms off, we see a flashback of Mariah and Donovan’s meeting, and we see why she left the place to “Harlem’s Hero.” Donovan asks if Luke wants it, and Luke has a very negative response.

The last major scene is back in Harlem’s Paradise. We get to see two acts, and several local VIP’s of the sort Frank Castle would like in his crosshairs come to visit. Misty is concerned about what Luke is doing, and lets him know she’ll be watching. His answer shows he has at least thought about the slippery slope he’s starting down. Claire even gets a cameo, but Luke sends her a surprising message. Tilda is in the club, too, sporting her distinctive hairstyle from the comics. DW, meanwhile, works on the barbershop. The last thing we hear is Luke’s father talking about strength and pressure, and an en memoriam slide for Reg Cathey, who played Reverend James Lucas, and died after filming.

This was a really frustrating way for things to end. Luke’s new setup is thought-provoking. This was definitely the end of a story, but it was equally clearly the start of another, and we won’t get to see it. Luke as “sheriff” of Harlem, and the form that’s taking, could be an amazing story. Whatever the cause of the Marvel/Netflix split, and there seem to be several causes, the stories and the fans (as well as everyone who worked on the shows) are who suffer. I really would love to see what season three was shaping up to be.

What I liked: There were some great surprises that, while I didn’t see them coming, made prefect sense. Several characters came to the ends of their stories in ways that made sense. Luke’s decision on how to proceed is different, and daring, and bold. It will only work if he stays essentially a benevolent dictator. I find it ironic that he’s essentially become what many anti-supers fear in order to do the best good for Harlem. I like that Misty put him on notice and that Luke clearly wanted her to do just that. I was surprised by a lot of Tilda’s actions, but I get why she did what she did. DW’s choice was a tough one, but it was the right one, and I’m glad Luke respected both it and him.

What I didn’t: Aside from not wanting the series to end, there were a few other things I didn’t like. Bushmaster went out with a whimper, a weak ending to a strong story. Tilda wanted nothing to do with her mother’s legacy, but is mad she didn’t inherit? It’s a very human reaction but it really doesn’t make a lot of sense. It’s too bad Donovan came out of all this unscathed.

It was a good ending, but there was so much more they could have done. I’m going to miss all the Netflix shows, but this was a particularly good one. I’ll give this a 4.5 out of 5.