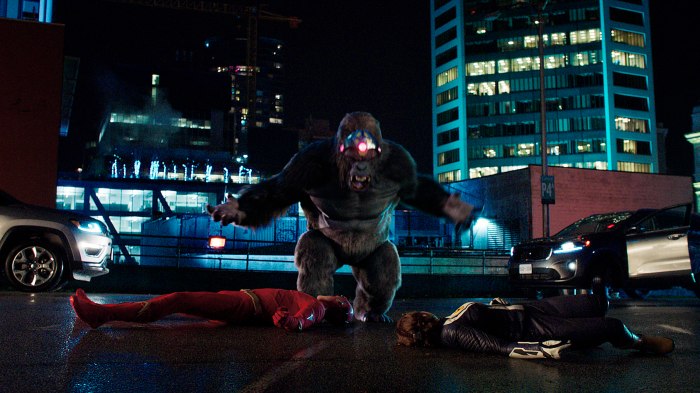 They tossed a lot into this episode of The Flash. “King Shark vs. Gorilla Grodd” had elements of one of those bad SyFy movies, The Shape of Water, an obligatory King Kong nod, and the return of Joe West finally. They also move one of the long running subplots ahead, with exactly some of the complications I was worried about. There’s a lot going on this week.

They start off with one of those action scenes you know is going to end with something or other “earlier.” Flash and XS get knocked to the street, wearing strange gadgets on their heads. As they lay there, clearly not being able to move, King Shark and Gorilla Grodd charge at each other, and you just know that’s going to be a hell of a fight. And then, of course, we get one of the many exterior shots of STAR Labs with “12 Hours Earlier.”

Cisco, in the Cortex, is holding up a glowing blue vial, and announces to the team he has the metahuman cure, a term I’m still really uncomfortable with. A cure implies something is wrong with someone, and I’m willing to bet a lot of people with powers in that world would disagree, Barry and Nora foremost among them. Cisco doesn’t get the hoped-for big reaction, and Wells speaks up, saying they are waiting for the “…but.” The cure is done, BUT, they need to find someone to test it on. After debating possibilities, they settle on King Shark.

This cues a visit to ARGUS and a guest appearance by Lyla Michaels, sans Diggle this time. Barry, Cisco, and Caitlin explain what they want to do, and Cisco emphasizes (for neither the first nor last time) that they need to secure consent. Lyla comments that King Shark has been talkative lately, which is new and different. At the West house, Joe is back! He shares pictures with Cecile (who once again gets a very small part with few lines) and Iris. Wally is happy in Tibet (at least it’s not Nanda Parbat), and Joe is less so about the new couch in the living room. Cecile goes off to take care of the baby, and Joe offers a good theory about Cicada, which Iris avoids by going to make coffee. I wonder how many scenes on this series center around coffee in some way or another, especially if you count all the Jitters scenes?

On the waterfront, Lyla brings her visitors to where Dr. Tanya Lamden is working with King Shark, who is the Earth 2 version of her late husband. She has developed a way to talk telepathically with King Shark (how come no one brings up the meta-tech devices that have been plaguing them all season? This sure sounds like one), and he erupts out of the water after she science babbles at him for a bit. He sounds interested in the cure, but then suddenly there’s a really annoying noise and he goes berserk, swats Barry aside (the Fastest Man Alive gets hit by surprise a LOT), and escapes into the water. Everyone is confused about what just happened. Lyla orders up some ARGUS backup, while Barry says they might need to rethink their plan.

Joe tells a funny story about how he found out he was allergic to Szechwan peppers, and Iris asks to work from his place. When he talks about her new office, she makes up another excuse, which he sort of calls her on. Iris leaves to deal with her non-existent plumbing problem. Cisco and Tanya talk about gadgets, and then Wells sticks his nose in about Tanya and Shay (King Shark’s real name)’s relationship. She gets very defensive, and Wells backs off a tiny bit. Cisco shows their new toys to Barry and Nora as they come in, and Cisco once again not-at-all subtly brings up getting King Shay’s consent before using the cure. They get an alarm about where King Shark is moments later, and Vibe takes himself and Flash there via breech. Why XS has to run on her own, I’m not sure. Cisco tries to talk to the man-monster, who grabs him. Worried, Barry injects King Shark, who staggers around and falls in the water. Shay climbs back out, growing more human by the moment, as Vibe looks really annoyed at Flash, which I don’t blame him for.

Shay wakes up at STAR, freaking out at first until Tanya talks him down. Barry talks about him taking the cure, and Cisco and Caitlin both correct him, clearly annoyed at the man (so am I). This is also another scene making me wonder why they bother with the masks and secret identities. There’s a lot of talk about how Shay is a special case because of his animal/human dual nature, and an additional adjusted dose of the cure being necessary. Shay takes full responsibility for his monstrous actions as King Shark, and agrees to not leave. Caitlin and Cisco bring Barry out to the hall, because he’s got some ‘splaining to do. They are both mad at him about bypassing the whole permission aspect of things. Barry is defensive and won’t admit he did anything wrong. This is very out of character for Barry, and I am once again wondering if there are lingering effects from his mind switching, or whatever it was, with Oliver. Since then, Barry has seem to be veering more to the dark side, and Oliver is a lot more law and order than he used to be. Either they are doing a long-running subtle after-effect of the crossover, or I’m giving the writers too much credit because I like my theory. Then again, Cisco is acting wildly out of character this season and he doesn’t have a Quantum Leap/Freaky Friday excuse.

Iris is at Jitters (where else?) and Joe catches up with her. She makes some lame excuses, and Joe cuts through them, telling her he knows about the time loop everyone was stuck in. Someone did a really thorough job of briefing him about what happened while he was gone. For reasons I don’t quite follow, Iris is more shaken by the deaths in the time loop she doesn’t remember than her brilliant decision to go after a superpowered serial killer on her own, putting herself and her loved ones firmly on his radar. Joe decides to bring her someplace to show her she’s not helpless.

Caitlin comes in while Cisco is brooding and “getting his Oliver Queen on.” They talk about what happened earlier, and try and work out exactly what made King Shark flip out. Barry comes in to apologize and gets a very unexpected, if deserved, reaction from his two friends. We find out why when Caitlin brings the new gadget they were hoping to use to talk to King Shark out of the lab, down the hall, and gives it to Grodd. As if things weren’t complicated enough. Grodd gets away, apologies are offered, and Lyla shows them how Grodd got away from ARGUS back on the night of the Enlightenment (can we bring the Thinker back and kill him again? Please?). We get a decent idea of what Grodd’s goals are, and why he’s acting now.

Wells offers Tanya some of his unique insights into the complications of multiversal dating (whatever happened to the woman he was starting to date on this Earth?). Joe tells Iris about his going to Tibet to heal up, body and soul, and has her work on a heavy bag to build up her confidence. This is where I disagree with how they handled things. I get this wouldn’t fit the tone of the show, but any cop who is worried that his nearest and dearest are being targeted by a killer isn’t going to push them to take up boxing. They’re going to get this person a gun and take them to the firing range.

The rest of the team gets an alert that Grodd is at the Broome Belfry, which is kind of a two-fer. There’s the whole giant ape climbing a building nod to King Kong, and Grodd was created by comics writer John Broome. The Belfry is also at the center of the city, which will give him the best chance to spreading his telepathic control over the city. Nora thinks speedsters are immune to Grodd’s control and, when everyone looks at her confused, comments the Flash Museum got a lot of stuff wrong (speedsters to have a limited immunity to Grodd’s powers in the comics). Caitlin offers to see if she can calm the beast, but her frosty alter ego objects strongly. Flash and XS go after him, with XS serving as distraction while Flash uses one of his super punches first seen in the fight against Girder. They down the meta-ape, but approach him ridiculously slowly, giving him plenty of time to recover and swat them through a wall into traffic.

With things getting desperate, Shay volunteers to be turned back into King Shark, since the monster can’t be placed under Grodd’s control. Even though he might not be able to regain his human form, he does this, and Cisco makes a nice dramatic breech entrance for him. There’s a really big Grodd/King Shark fight that is savagely brutal and lets the speedsters recover. There’s some unlikely teamwork, and the speedster/shark contingent wins.

Cisco and Nora are thrilled at having seen the monster fight, and Lyla outlines the new security protections for Grodd. There’s also a comment that his using the crown device has increased his powers, so that’s going to be an issue in the inevitable rematch. Wells gives Tanya some more advice, and she and Shay/King Shark have a moment through the glass wall of his aquarium. Where that is, exactly, I’m not sure (then again, we never find out where that waterfront location was, either). Iris goes back to work in her new office and is disappointed to find out that she missed a big monster fight. Caitlin and Cisco debate snacks and then Barry comes in to apologize again. They accept it, and then Barry comes up with what seems like a really foolish, unworkable idea to end the episode.

What I liked: I’ve always liked Grodd. Written right, he’s a formidable, savage, dangerous foe. Like a lot of folks, I enjoy a good monster movie, and this was a nice nod to those, as well as Grodd’s creator. It was nice they let someone else be the hero of the episode. There was no Nora/Eobard drama this episode, which I’m getting kind of sick of.

What I didn’t: Barry got tagged twice this episode. Actually, three times, which doesn’t speak well for his superspeed reflexes. Where the heck was Ralph, and what’s with Cecile’s reduced role? As I mentioned above, I don’t really buy the Joe/Iris Rocky moment. I haven’t liked the cure storyline since it was introduced, and this episode is exactly why. Now ARGUS knows about it, and do you really think it’s going to be long before some slimy government agent or other shows up demanding the cure, tries to steal it, or does everything they can to duplicate the research? Barry and Cisco are both acting out of character this season, and my pet theory only works for Barry and Oliver, not Cisco.