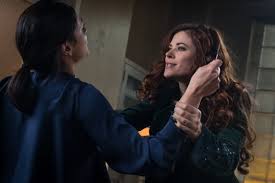 Lee and Ivy go out dancing

Gotham’s final season continues with “The Trial Of Jim Gordon.” The episode was directed by Erin Richards, who plays Barbara Kean on the show, and written by Ben McKenzie, Gotham’s own Jim Gordon. For being so close to the end of the run of the series, not a great deal happens until the very end, but it was a good episode. Richards and McKenzie make a good team, on screen and off.

The show opens with the GCPD gearing up for what will clearly be a dangerous meeting. The city is running low on drinking water, since they’re still cut off from the “mainland,” and Gordon has a plan to try and conserve resources. Lee isn’t happy with him risking his life again, and they argue about it, his attitude, and the coming baby by Barbara Kean. Jim, your life really is turning into a soap opera, man.

Penguin has agreed to host the summit of the gangs, to stay in Gordon’s good graces and divert suspicion from his and Riddler’s secret project. Things are very tense, and no one is inclined to go along with Gordon’s cease-fire. He makes a simple, direct speech that is persuasive, but before more than one gang can agree, Gordon is felled by a gun shot. Hey, Jim, this is why cops wear body armor. A frantic Harvey Bullock gets Gordon brought back to the GCPD. As they carry him off, the always amused Penguin comments, “Well, I didn’t see that coming.”

Bruce shows another hint of the man he will become when he gets Selina to go with him for a “salvage run.” It’s actually a very nicely set up date, and the two of them have some great chemistry. Of course, this is Gotham, so we see someone is watching them, and it’s not Alfred. Bullock gets Gordon back to the GCPD, and a deeply worried Lee goes to work on him. Bullock leaves Harper in charge of the show of force he believes is necessary while he goes to look into the shooting. As Lee tries to patch Gordon up, there’s a really nicely done transition from her impromptu operating theater to the start of a dream sequence that gives the episode its title.

Selina’s fun banter is disrupted when Bruce goes all moody, wondering about fate and how much has happened to Gotham because of him. Selina tries to argue him out of this line of thinking when the voyeur reveals herself: Poison Ivy. Clearly, this bodes ill for date night. Penguin’s musing about blood on the floor and missing help gets interrupted when an enraged Bullock returns, asking some very forceful questions. Penguin protests his innocence and shows some evidence that backs him up. Bullock takes what he wants, Barbara asks if she can help after they argue over her possible guilt, and the frazzled detective sets her to keep the gangs from tearing the city apart.

Selina’s attempt to stand by her man goes awry when Ivy puts Bruce under her control and brings in an old enemy of Selina’s. Bruce and Ivy leave while Selina has a big problem to deal with. Ivy makes a few nasty remarks about Selina’s recent recovery on her way out. Speaking off, does anyone else remember Selina’s eyes glowing like a cat’s for a moment when she got better? I guess they’re not following up on that? Lee pleads with Gordon to not give up and keep fighting while Gordon, in his dream, puts himself on trial. Bullock comes in for an update and to match up his evidence with what Lee recovered. The bullets are marked with a VZ, so our favorite sociopathic hitman is back. I’d say him putting his initials on his bullets is a bit unlikely, but the man scars himself for each kill he makes, so maybe that’s not so out there.

Speaking of Zsasz, he turns up in front of the GCPD, firing away at everyone anywhere nearby. In his usual cheerful but detached manner, the killer says he’s just there for Gordon and the others can get out of his way. Alfred manages to sneak up on the gunman and tackle him before knocking him out in a fairly brutal fashion. Selina learns her foe is also under Ivy’s influence, and a really well-choreographed fight ensues.

Bullock interrogates Zsasz, which is entertaining. The killer complains about Bullock’s breath, claims to be vegan, and reveals he’s not working for himself. His general dopey demeanor helps Bullock figure out he’s under Ivy’s sway. Alfred brings coffee and reassurance to Lee, sharing his own doubts about ever being a fit parent until he ended up with Bruce in his care. Lee tries to get Gordon to wake up again, and his twisted dream of his trial continues, but he knows something is wrong with the scenario.

Zsasz gets some more great line delivery with the cop guarding him, but the guard isn’t around long enough to get a name. Another Ivy-slave comes in, freeing Zsasz and giving him a small store’s worth of guns, while Ivy sweeps in and gives more instructions. Speaking of great lines, Bruce wanders to Lucius Fox’s current project, and sprays some Eau de Ivy on the tech genius. The two of them then set about sabotaging what they’ve been working so hard on. At Sirens, Barbara comes up with a unique approach to get the various gangs to cooperate with the ceasefire idea.

Bullock rallies the troops to go out looking for Ivy when Zsasz waltzes in and opens indiscriminate fire throughout the squad room, singing Ivy’s praises as he does. He babbles more than he should, and gives away some critical information. Alfred, hearing the gunshots, charges off to help, leaving Lee alone with the unconscious Gordon, which would be ok if that wasn’t when Ivy came in. As Gordon hallucinates his own wake, with a truly impressive turn out, Lee and Ivy square off. Zsasz keeps shooting up the squad room, annoying Bullock. Lee takes some drastic measures to drive Ivy off, and the plant-based seductress takes some revenge on the way out.

Still doing Ivy’s bidding, Bruce ends up fighting Selina. She handles herself just fine, like I knew she would, lets some of her real feelings slip out, and manages some Avengers-style “cognitive recalibration.” She does the same wake up technique with Fox, while Bruce averts the looming disaster, and everyone realizes Ivy is after Gordon. Bullock pulls a clever trick from Nygma’s book to deal with Zsasz. In his nightmare, Gordon gets led to the electric chair by Will, the young boy he befriended who was later killed in Haven. Gordon gets strapped down and has a truly horrific scene with Lee and the baby they lost.

Gordon finally manages to wake up and ask Lee something. One month later, Bullock presides over the wedding of Gordon and Lee, which has a lot of very entertaining lines in it. Bruce and Selina follow suit after Gordon gets told he can kiss the bride. At Penguin’s place, Barbara sulks and Penguin turns the screw a bit. It sounds to me like there’s a nasty custody battle brewing.

What I liked: Zsasz is always entertaining. Bullock is fun to watch, even when he’s over the top mad. The transition into Gordon’s nightmare was exceptionally well done. Bruce and Selina had some great chemistry in their scenes. Everyone under Ivy’s influence was amusing. Ivy actually had a good plan. Bullock remembering Nygma’s trick was slick.

What I didn’t:  I actually didn’t like the nightmare itself. It was fairly predictable until the end with Lee and the baby. Zsasz the deadly marksman just happened to not shoot Gordon fatally?

I enjoyed the episode, and I’m glad Lee and Gordon are finally, officially together. I’m looking forward to Barbara having her baby, which is, of course, another major step in the Bat-mythos. I’ll give this a high 3.5 out of 5.