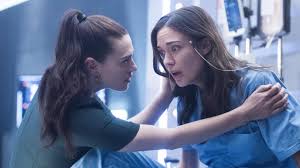 Supergirl and company start off with a scene that will make you not want a cookie for a while. After that, they go back to following up on the dead birds that were raining down at the end of last episode. This, apparently, is one of the signs that Pestilence is becoming active. After talking about how Brainiac 5 needs to get the cure for the blight out of their DNA, a major disagreement erupts between Supergirl and Saturn Girl Imra about how to deal with the latest World-Killer. In addition to being against Supergirl’s general philosophy, the Girl of Steel is worried they might repeat the mistakes they made with Purity. These two don’t seem likely to come to an agreement any time soon. At the end of this, there’s an amusing scene with an image inducer and one of the team seeing through it. They also learn that the government of National City has been stricken with a plague. The personality issues we’ve seen with Purity/Julia and Reign/Sam are likely what gives us the episode title, “Of Two Minds.”

In her lab, Lena is working with Sam. She has some good ideas and intentions, but things are going to get rough for Sam as this goes on. Lena has a plan for how to study Reign, but it’s not going to be fun for Sam. We do see more of the process/interaction between Reign and Sam than we’ve seen before.

The DEO is trying to handle the spreading plague, which has so far spared the mayor. Weirdly, J’Onn is wearing one of the plague masks but Supergirl isn’t, which I don’t understand. All the infected have scratches they don’t remember getting. Winn has a run-in with a lady he dubs “Mean Doctor” who doesn’t seem to real fond of the boyish DEO computer genius, but seems to like Alex just fine. Things get more complicated when the plan to evacuate the sick hits a snag in the form of Imra taking some decisive and unilateral action Supergirl doesn’t appreciate. Supergirl eventually persuades Imra to back down, but the tensions are rising between these two.

Sam and Lena exchange some information, and there’s more unpleasantness ahead for Sam. Mon-El and Imra have a disagreement about how to handle things, and Mon is in the difficult position of sort of siding with his ex-girlfriend against his wife. That can’t make things any easier for anyone. Supergirl and Alex talk about the difficulties the superhero is having with the woman from the future, and Alex offers some reassurance. The DEO gets a lead that ends up being both a dead end and another Kara/Imra confrontation, and one of the team gets sick, scaring everyone.

James comes by to visit the sick, and we finally at least get a mention of CatCo, which seems to have been ignored for the most part this season. Some of the team are very entertaining on the drugs they’ve been given, and there’s a great bit with Alex swatting at Brainy. They learn the scratches won’t help as much as they had hoped, and Imra and Supergirl have another discussion, with Imra making an impassioned plea for her side.

Lena’s experiments have more difficulties for Sam, who is really having some problems dealing with them. Supergirl worries about her ailing friend, and J’Onn shares a Yoda reference with her. He then talks about some of the difficulties he’s had with his father’s illness to encourage her to keep trying to save the World Killers. It’s a good moment for both of them.

Tensions are also running high with Mon and Imra, and for good reason. Mon makes some very good points about Imra holding back information from both Kara and Mon about this mission. You’d think a telepath would value honesty more. Imra leaves as Brainiac comes in, very unsure of what he’s supposed to do about the strife between his friends and teammates. Brainy doesn’t argue, just offers some cold facts about their best approach. He and Mon’s conversation gives him an idea about their cure. As the sick teammate worsens, another suddenly falls to the floor, increasing the pressure on everyone.

The infected teammates aren’t doing well, and both have some touching moments. James touches base with Lena, who takes time out from torturing Sam for a good cause to offer some hopeful words. Sam comes to a resolution about Reign that shows her force of will and where her priorities are. As the sick ones get worse, Brainiac 5 gets a crash course in a current trend that helps them narrow in on Pestilence.

Pestilence herself is on the move, and has a score to settle that combines her World Killer persona and her human side’s grievances. I have to admit, it’s probably a variation on something a lot of us have thought about doing. Things degenerate into a nasty brawl with World Killers vs. Supergirl and some Legion backup. Things don’t go well in the fight, but they end up getting something they desperately needed.

They all meet back up at the DEO and get a few things straightened out. Imra and Kara have a good talk. The Legionnaire reveals some of what she’s been keeping back about the future and her motivations for this mission. Brainy and Winn have come up with a way to trace Purity’s sonic waves, and get a bad moment when they realize where she’s going. A few secrets gets revealed and they travel to Lena’s in a new and unique way. The episode ends on a nasty note that’s going to have the heroes’ work cut out for them.

What I liked: I’m glad they finally revealed why this mission was so important for Imra. A lot of what she’s done makes more sense now. I was starting to wonder if they were bringing Brainy back or not. James had a few good scenes in this one. Lena is certainly driven but understandably so. I like that Mon called Imra on some of her stuff.

What I didn’t: I’m a bit sick of the whole World Killer story. I suspect it will take up the rest of the season, which is too bad. I don’t get why J’Onn was wearing the mask and didn’t join in the big fight near the end.

It was a decent episode with a lot of pieces coming together. I’ll give it a solid 3.5 out of 5.