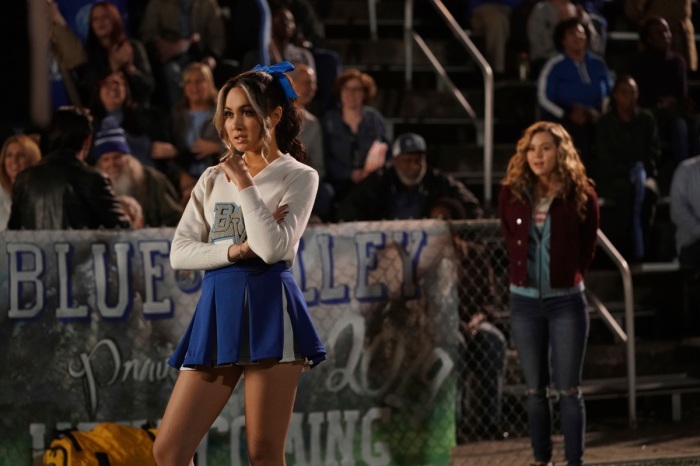 “She’s cheer captain and I’m on the bleachers….”

The new Justice Society, who have a lot of work to do before they really earn that name, got a lesson in teamwork and experience versus power last time, and now we get to see if it sunk in. There’s some team training, an unexpected emotional outburst, bad cover stories, and some light shed on yet another secret of Blue Valley. The villains are on the move, and a new foe gets a lot of screen time in “Shiv, Part One.”

To the musical accompaniment of BTO’s “Takin’ Care of Business” we see the young heroes go about their mornings, with Courtney, Rick, Beth, and Yolanda all doing their own thing before school. Courtney’s developing an odd relationship with the cosmic staff, and Beth’s parents are noticing the changes in their daughter. Mike returns to the house, not happy about his paper route punishment (hey, they remembered!), and Pat and Courtney have a badly coded conversation about her upcoming training. Pat considers sharing some secrets with Barbara, but Courtney signals some displeasure at the idea.

While Pat drives the kids to school, Junior is with his father at the hospital. He’s being a dutiful son, which his girlfriend, Mean Girl Cindy, just can’t seem to wrap her head around. Cindy is her usual, utterly self-centered self, and can’t understand why Henry doesn’t want to plan the big Homecoming dance. Is Homecoming a mandatory part of every teen hero story now? She finally manages to act somewhat normal, but is clearly not enjoying it. At school, the team gets a nice little together moment with a cool walk down the hall and some music, which gets disrupted by, you guessed it, Cindy. We get a bit of Cindy’s history, and Beth is far too excited for everyone’s own good.

Barbara gets some screen time at the office as her boss, Jordan (the evil and ruthless Icicle) makes some plans and gives her some extra responsibility. While Principal (Fiddler II) Bowen makes some announcements, Cindy turns her ire on her usual sidekick, Jenny. As Cindy merrily burns bridges, we see more of the odd janitor, Justin, and Courtney being a nice person. Henry is having some problems with an emerging talent, and Cindy makes an odd remark after their latest spat. Justin returns to his closet, and we see some strong hints about who he really is.

In Chem class, Cindy and Courtney are forced to work together. The unlikely pair actually bond a bit, and we get a few more dribbles of Cindy’s history. Henry keeps having problems in Geometry, and gets an unexpected benefit. There’s also a nice Easter Egg for another Golden Age hero among the test papers. Cindy and Courtney are actually civil to each other and make some plans for later in the weekend. The Mean Queen then goes home, and we see there’s a really odd power dynamic with her and her step-mother. Clearly in a foul mood (what else is new?), Cindy goes down into the villain tunnels that I guess run through the entire town. Passing the caged Grundy, she goes looking for her father. The heroes-in-training arrive at Pat’s garage, the Pit Stop, to begin their education, and are underwhelmed by what Pat has put together for them.

Creeping around in the tunnels, Cindy overhears much of the Injustice Society talking about their new foes. While she wonders who Stargirl is, Pat explains what he has in mind for the JSA-to-be. He gives a rundown on some of the players in the Injustice Society, occasionally contradicted by Courtney. Finally, she gets cocky and impatient and blows the training for the day. When moody outsider Rick is telling you that you’re not being a team player, you’re really screwing up.

Finding her father, Cindy has a long tantrum at him about things she wants, and sounds a bit like Veruca Salt from Willy Wonka, but worse. At least Pat isn’t the only one having problems with the younger generation. We hear a bit more of Cindy’s history, and it’s no wonder the girl has issues. They argue about Stargirl, who Cindy is supposed to be watching, and the plans for the future by the Injustice Society. They do a nice job alternating between Cindy and Dr. Ito and Pat and Courtney. Neither young woman comes off looking that good. Barbara prepares for her work trip, gets an unexpected present from Mike, and there’s a group hug minus Courtney, who’s being standoffish and sulky. A teenager, basically.

There’s more parent/offspring bonding as Cameron gets home from school, unsure about asking someone to the dance. Jordan, his father, tells a story about his courting Jordan’s mother, and offers some good advice. It’s a really nice scene, made more intense when you keep in mind who and what Jordan is. At the big Homecoming game, little goes as planned. Pat has brought both Mike and Courtney, and Courtney is getting pushy about her suspicions regarding Principal Bowen. Pat goes off to get snacks, and Mike has a really unexpected eruption at Courtney before storming off. She does manage to look like she feels bad about it but gets distracted by a John Hughes movie moment when Cam asks her to the big dance and she fails the friendship test. Really, Courtney is remarkably self-centered this episode, much like Cindy, but less outright evil. Courtney gives someone some unwelcome news, then runs off to ignore her stepfather and follow Principal Bowen. Cindy, also not having a great night, grouses about being in high school, but then, who didn’t?

Pat has a run-in with Crusher Crock about his diet, while Courtney eavesdrops and sneaks around. Pat notices her absence when he gets back with the food, and Mike is, as usual, unhelpful. Courtney decides to spring into action, joined randomly by the staff, who she makes a very untrue comment to. While Justin shows he doesn’t have much of a life, Courtney gets changed and breaks into bad guy central, because she doesn’t know how to listen. Cindy has another temper tantrum and then sees a way to blow off some steam, and both annoy her father and prove he’s wrong.

After a lot of buildup, this turns into a first meeting, and then knockdown, drag out, really ugly fight between the girl the series is named after and the one the episode is named for. It’s a nasty exchange of attacks with some massive property damage thrown in for good measure. Our titular heroine only gets saved by some unexpected intervention, as someone steps in, saves the day, and hides. Shiv limps off to lick her wounds, the staff plays Lassie, and we see there’s a connection between two characters we haven’t seen on screen together before. There’s some really bad secret identity discipline here as the show ends.

What I liked: The show continues to do some Easter Eggs, like the opposing team at the game being the Civic City Atoms (Atom’s original hometown was Civic City), Johnny Quick’s magic formula being on the math test, and Barbara going to Oakville, a really obscure Golden Age town. The big fight was damn impressive. Crock, when he’s not trying to kill everyone, is sort of amusing in a weird way. I give Pat points for trying to train the younger heroes. I’m intrigued by the Mike/Barbara bond, and Mike’s later outburst.  They did a good job giving us hints about Cindy’s past and with Pat’s briefing on the Injustice Society. I like what they did with Justin. The Cameron/Jordan scene was nice (the warmest relationship is between the Icicles. Weird).

What I didn’t: There’s no way in the world Cindy and Courtney don’t know each other’s secrets now. Courtney was being a brat. The staff suddenly showing up at the school was a little too convenient, and Courtney left a lot of very noticeable damage in her wake. I think Mike is going to have a bad night immediately after this.

Maybe Courtney will finally start listening after this. I’ll give this a low 4 out of 5. Most of it really impressed me.