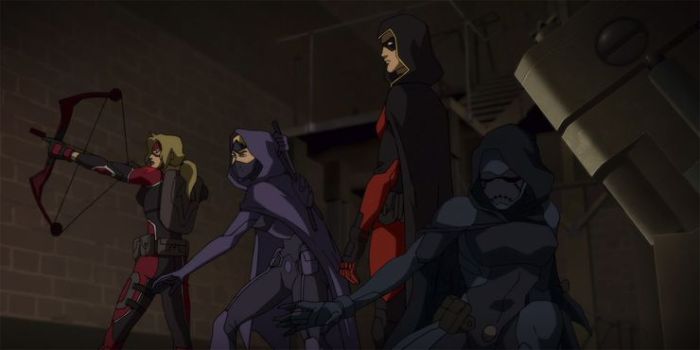 I’d watch a spin-off of this squad. Drake’s Angels?

The chaos of Young Justice’s “Outsiders” season ramps up to new levels, as we see how events on several different days blend together, and we learn more about what some of the bad guys are up to. Also revealed is the plan behind some of the recent changes in the Justice League’s membership, a new and intriguing Gotham-based team, and at least a nod in the direction of the one original Outsider we haven’t seen yet. There’s a lot of jumping around in “Triptych.”

The episode opens with Nightwing giving Oracle a briefing on a run-in with some criminals at STAR Labs Detroit. Shade, Livewire, and Cheshire stage a break-in and steal something big. Livewire gets in some truly entertaining lines at Shade’s expense, which is fun to watch. Then, jumping ahead a few days, we see things between Jefferson Pierce and Dr. Jace are definitely progressing. It’s not a real racy scene or anything, but definitely shows this isn’t really aimed at kids. After Jefferson muses about his place in the League and says some unpleasant things about Batman, to Jace’s amusement, he gets summoned by Dick Grayson. There’s an increasingly strained metaphor about fences before finally revealing some news that has Geo-Force even more impatient than normal.

Back to Detroit we go, as very obscure DC character Dr. Moon patches up some of the bad guys just as the heroes arrive. Mist proves to be a reluctant, but effective, combatant, as Livewire gets a surprise from Black Lightning, and Geo-Force proves he’s more powerful than a taxiing plane. Shade’s powers tip the scale for a bit, but he hits a nerve and Halo pulls out all the stops and some new tricks. Tigress gets past all this to deal with Dr. Moon and have some words with Cheshire. It’s an interesting mix of intel and personal business.

Tim Drake might be following in Dick Grayson’s footsteps in more than just being Robin. His team, in Gotham to keep tabs on the Mad Hatter, consists of Spoiler, Orphan, and Arrowette—an all-female group except for him. They get a lead on what’s going on with the Alice-obsessed madman, Orphan displays some weaponry she doesn’t usually have, and Spoiler shows she’s pretty slick. The team finds their quarry, and a big fight ensues. It’s a nicely done piece of work for both action and characterization.

Then things get really interesting in a clandestine meeting. Among the participants are Kal/Aquaman (still wondering what happened to the original), Miss Martian, Nightwing, Oracle, Batman, Robin, and Wonder Woman. Between cutting back and forth from this meeting to a jailbreak, we learn a lot about what’s going on behind the scenes, and some cameos from Sportsmaster, Brick, Rocket, and the far too-easily defeated pair of top-tier heroes Flash and Captain Marvel. All of this leads to a discussion of Branchwater (obvious Blackwater knock off and new metahuman traffickers), led by criminal industrialist Simon Stagg. Stagg was instrumental in the origin of adventurer Rex Mason becoming Metamorpho, sole founding Outsider we haven’t seen this season. The show ends with a morality debate largely between Wonder Woman and Batman, as they disagree on what they’re doing, and why, and what the other heroes’ reactions might be.

What I liked: The action was great. I’m intrigued by Robin’s team, and I was really impressed with the reveal about what the scheme is behind the scenes. I liked Tigress and Cheshire’s scene. Livewire had some great dialogue, and I wish we’d gotten more of it. I wonder if Stagg showing up will finally lead to Metamorpho. Wonder Woman and Batman both made some good points. I’m always happy to see Nightwing and Oracle together. Spoiler pulled off some great moves.

What I didn’t: Flash and Captain Marvel were taken out far too easily. I get it’s not their show, but those two powerhouses went down pathetically. Aside from “it worked for the scene,” I’d like more explanation about Orphan’s sudden change in personal weaponry.

I really enjoyed this episode, and this season has been great so far. I’ll give this a 4 out of 5.