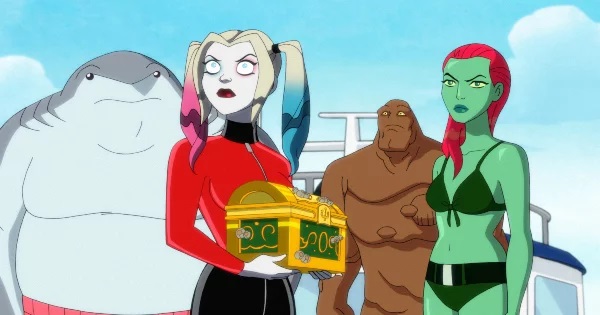 Poison Ivy does her Dr. No look

I’m finding the Harley Quinn show uneven. They do some great ideas and clever twists, and then do some kind of weak and obvious material. This episode, oddly mixed both extremes. It looks like Harley is going to get what she’s been wanting, but you know there are going to be some strings attached. It’s an all over the road episode in “L.O.D.R.S.V.P.”

The episode opens with another robbery, but this time it’s at least a different setting: Atlantis. King Shark is finally in his element, pretty much literally, and they don’t do anything with him in the scene, which is a bit disappointing. Of course, if you’re committing a crime in Atlantis, there are only a few people you’re going to run into, and naturally, the team crosses paths with Aquaman. Aquaman is actually a formidable foe, especially in the water, but the Superfriends cartoon and an endless series of jokes have made him someone easy to make fun of, and sadly, that’s the route they take on this episode. I confess to being disappointed, both because, let’s face it, Aquaman jokes are easy, and yes, I’m a fan of the character. The gang gets away with help from Ivy, who turns up looking very much like a Bond girl.

Back the Mall of Villainy, the news covers the heist. Ivy, annoyed, once again insists she’s not part of the crew. Harley largely ignores this because A) she doesn’t want to hear it and B) she finally gets a letter from the Legion Of Doom that she’s invited to come see their place and talk about opportunities. The crazy clown lady guilt trips her best (and about only) friend into coming along. We also get some hints there’s something odd about the Mall, which landlord Sy pretends not to notice.

The crew gets the grand tour from Bat-foe Scarecrow, voiced by Rahui Kohli (Ravi from the sadly gone iZombie). Various things of interest get pointed out, and there’s a swipe at NFL commissioner Roger Goodell. King Shark gets told something that makes him very happy, and Lex turns up to address the team. Harley is ecstatic, Ivy considerably less so. While the clown visits the gift shop, Ivy demands some answers and doesn’t like what she hears at all. Back at the mall, things get even weirder as Sy and Dr. Pyscho (still banned from the Legion of Doom) get a peculiar sub-plot.

At the big party, there are tons of villains in the background, making some nice Easter Eggs for comic book fans. Security is a joke (and seriously, who is going to attack a gathering of villains?) and Ivy runs into Kite-Man. They have some fun banter, and Harley begins to suspect Ivy is hiding things from her. Ivy’s spirited defense of Kite-Man (which is a nice change) gets interrupted when Aquaman storms in, demanding the return of the stolen Atlantean treasures. The sub-plot at the mall gets even stranger, with Dr. Psycho justly declaring, “I’m going to need you to explain that.” It’s rare I agree with a villain, but this is one of those times.

The fight rages on at the Legion, and generally it seems to me like the writers don’t really know who Aquaman is. He goes from improbably powerful to feeling punches from the non-powered Harley before being defeated, or at least distracted, by yet another bad joke. Harley is remarkably effective, and gets cheered by the bad guys, leading Lex to look on with raised eyebrow. Sy explains the origin of this particular bit of strangeness at the mall, and it’s not really that much worse than a lot of comic book stories from the Silver Age.

After the earlier chaos, there are a series of twists that all go oddly. Ivy tries hard to protect her friend from an uncomfortable truth, Luthor pulls a surprise, and a rift forms between the two leading ladies (pretty much all one-sided). After the party, Harley flips out on Ivy, which leads to an irritated exit. Most of the team stumbles in on the Sy/Dr. Psycho plot, and that bit gets resolved with some help from powers I don’t think Psycho has displayed before, and some jokes about the movie Ghost. The ending of that part of the story could be one of those old ABC After School Special kind of moments, but things take a turn.

The episode ends with more surprises. The team returns to the Legion from Harley’s big welcome party, and there’s some decent banter with her and Dr. Psycho. Our two friends almost make up their quarrel, but Harley gets distracted at the last minute and doesn’t send the apologetic text she’s typed. The last thing we see is Lex pulling a surprise that likely anyone would have seen coming (I did), and, for the first time on the series, a cliff-hanger.

What I liked: There were a lot of great cameos at the Legion of Doom get-togethers. I’m glad Ivy is starting to acknowledge her relationship with Kite-Man (one of the show’s best innovations in my opinion). I’m glad to see (ok, hear) Rahul Kohli again. All the voice actors do a great job, as usual. The weirdness at the mall was entertaining and at least true to parts of the genre. Ivy recreating Ursula Andres’ classic look from Dr. No was entertaining (and I bet a lot of folks missed it). Points to the artists for actually bothering to make the women’s hair look wet in the opening scene, which almost never happens on cartoons.

What I didn’t: I commented about the Aquaman stuff earlier. The big surprise at the end really wasn’t. It was a waste to have King Shark sit out (literally) the underwater caper.

It was an entertaining episode. I’ll go a low 3 out of 5. It’ll be interesting to see how the next few scenes go.