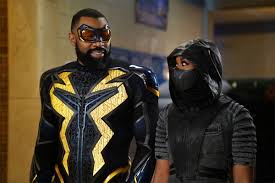 The next show back from winter hiatus and dealing with the post-Crisis world is Black Lightning. Of all the hero shows, it seems the least changed in the new world. Crisis is referred to in the “previously on” recap, but that’s close to it, and there are no substantial changes noted. While I love the team up concept, I almost think they should have left “Earth BL” or whatever we’re calling that one off on its own. We get updates on all our major characters, a few minor ones, and I finally figured out who someone was supposed to be in “The Book of Markovia: Chapter One: Blessings and Curses Reborn.”

The show opens with Black Lightning flying back to Freeland, I guess from the sort of Justice League set-up Flash invited folks to at the end of the crossover. I believe this is the farthest we’ve seen him fly, and he blasts through the ASA barrier around Freeland effortlessly. Either he’s learned a few things or never bothered trying before. Jennifer, in her Lightning suit, is in some weird featureless void long enough to worry, yell for help, and try and figure out some kind of parting messages to her family. Finally, she reappears at Anissa’s place about the same time Black Lightning lands on the balcony and they have an emotional reunion. Having learned a lot and yet nothing at all, Jennifer announces she’s off to kill Odell before Jefferson points out several flaws with this plan.

In the Grotto, Jennifer and Jefferson burst in, bemusing Gambi, who doesn’t know they’ve been gone (Crisis memory wipe strikes again). Jennifer makes various demands, and the two older men try and get her to at least see some reason (something she’s not great at). They relay their experiences, Gambi gives some good advice that also helps play into the “nothing’s changed” vibe on this show post-Crisis, and Jennifer does show a brief burst of maturity. I like her sometimes, but she’s a remarkably inconsistently written character. Gambi reveals a secret, and warns that Blackbird is walking into an ambush in the tunnels below Freeland. I don’t think we know why there are so many tunnels down there. Jennifer takes off to check on Lynn, leaving Jefferson to back up his other daughter.

At the Pitt, Major Grey briefs Odell on the ASA’s current limitations within Freeland, and he doesn’t seem to care. He’s very much of the “Do this, I don’t care if it’s impossible” school of leadership. At her lab, Lynn is working on her own special project, and sliding seriously into denial and addiction. Jennifer comes in, startling Lynn, and triggers a minor accident that Lynn completely overreacts to. It’s a great indication of how far she’s fallen. Down in the tunnels, Blackbird runs into trouble, although she handles herself well. When the weight of numbers starts to drag her down, she gets a timely rescue from Black Lightning. Jefferson gets another warm reunion with his other daughter.

With the old saying about shit rolling downhill, Grey takes Odell’s impossible directives and spills them on to Lynn’s former assistant, Dr. Blair. He, too, gamely tries to inject logic and gets completely run over. At Gambi’s shop, TC turns up, tracing down the man who helped him with the use of his special powers. Somewhere in here, the penny drops and I figured out that TC is supposed to be this world’s version of Technocrat. Technocrat is a very minor DC character who was part of the Outsiders, the team the comic book Black Lightning is most closely associated with. In my defense, in the comics, Technocrat is a powered armor kind of hero, ala Iron Man, not someone with their own powers. It’s an amusing scene as TC talks his way into the Grotto, arguing with Gambi’s system the whole way.

Jennifer tries to make sense out of what she’s seeing of Lynn’s behavior, and, I suspect, has some emotional blinders firmly in place. When things take a turn for the seismic, Jennifer takes off to try and help end the shaky problems, while Lynn steadfastly refuses to leave, because her work is “important.” The quake is felt down in the tunnels as well, leading Blackbird and Black Lightning to part ways for a bit to accomplish various goals. Jennifer ghosts Odell, finds Brandon, and manages to stop the latest problem to beset Freeland, which I swear must be cursed.

Arriving at the lab, Black Lightning finds various bad signs, but no Lynn. With some help, he finds where his wife is, and goes to check on her. Jefferson spends a lot of this episode “checking on” people, which I’d argue isn’t the best use of his talents, but I understand the ties of family. Gambi has a talk with TC and tries to come to terms with the impressive abilities of what seems to be his new protégé. TC is touched when Gambi makes him a kind offer. Finally finding Lynn, Jefferson almost wishes he hadn’t as he sees her at some of her worst behavior, frantic, raging, riding hard core denial, and being fairly egotistical. When he tries to intervene, she physically and verbally attacks him, then acts like she expects him to hit her. That’s never going to happen, Lynn. Before he can really deal with this situation, or even really come to grips with it, Jefferson gets a call from Henderson and takes off, since Black Lightning is needed again.

The token nice ASA agent, Gardener Grayle, starts wondering about his orders when he’s given a nearly impossible task and then gets some help from his assistant, Travis, who should be down for the count. Grey and Blair are plotting things behind the scenes that don’t look good for anybody. The Resistance holds a briefing, which gets temporarily derailed as Black Lightning and Blackbird have some words off to one side. I think both of them make some good points, and this isn’t the time for pretty much any of it. TC makes some more discoveries in the Grotto, which make him like Gambi even more. TC’s request of Gambi gets put off until “the time is right,” and then Gambi gets surprised when TC casually mentions he can help with part of the puzzle that’s keeping Gambi from learning who tried to kill him quite a while ago.

Jennifer and Brandon take some time out for some teenage angst, although a lot of it is actually justified at this point. Their talk gets interrupted by some unexpected tranq darts. Blackbird gives a rousing speech to the Resistance, which ends in a chat that’s initially catchy but goes on a bit too long. Grayle and Travis are trying to follow orders and take Jennifer and Brandon in, but somehow Jennifer both shrugs off the drugs and manages to overpower her metahuman dampers. I’m not quite sure how that worked, but she and Brandon get free, battle some ASA thugs, and then escape in part due to some help from Grayle, who is really questioning a lot of things right now. Jennifer also displays what seems to be a new power in this fight.

The ASA prepares to do something drastic with their special prisoners, and the Resistance finally makes a move, led by Blackbird and Black Lightning. Mindful of their earlier talk, Black Lightning makes sure to follow Blackbird’s lead, and they manage a rescue that goes pretty well. Gambi and TC discuss blockchains, encryption, assassins, and hoagies. Black Lightning and Blackbird have a heart to heart chat after their action, and get mocked a bit by Henderson.

The last few scenes are interesting and varied. TC pushes his powers too far and has a nasty side effect. Jefferson gets home and has some unpleasant truths to deal with, as well as some aftermath from earlier. Jennifer takes a stand and tries to do something she’s been talking about a lot, but doesn’t check things out and ends up tipping her hand. I suspect that’s going to go badly for her down the road.

What I liked: TC got some very good scenes, and I’m enjoying his character. I like that Gardener Grayle is showing some signs of heroism. It was good that Jefferson was mature enough to let Anissa take the lead without fighting her on it. Some of Lynn’s utterly baffling attitude early in the show is making a bit more sense now. It’s nice to see that at least one CW/DC hero has a hidden base that’s actually hard to get into.

What I didn’t: Lynn’s a mess and needs to be stopped and gotten into treatment. How did the ASA know to put a collar on Brandon? As far as we’ve seen, they haven’t crossed paths before. Henderson’s call to Jefferson was so disjointed I thought it was a plot point hinting at a problem. Jennifer really needs some chill pills. After all the effort to merge worlds, they seem to be doing their best to pretend it didn’t happen.

It was an uneven episode. I’ll give this a 3 out of 5, which is a low rating for Black Lightning from me.