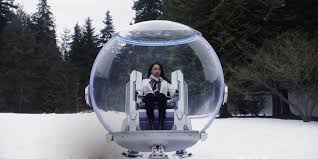 If I could save time in a bubble…

Things are speeding along towards the end of the season on the Flash. Barry made a rash decision last episode, and that causes a lot of complications for this one. The emotional fallout is all over the place, affecting several of the characters. One of the regular cast disappears again, there’s an old threat returning, and, in case we forgot, a meta-powered serial killer running around. Despite it being called “Snow Pack,” there’s a lot going on here that is seriously not cool.

The show opens down in the Pipeline, where Iris confronts Barry about his abrupt termination of Nora’s visit to their time. She’s pissed off at him, and they argue a lot. I think Barry screwed up by not talking to Iris ahead of time, but she’s being really cavalier about Nora lying for months and working with the villain that murdered Barry’s mother right in front of him. No one’s right, and it’s an ugly scene. While what they are arguing about is obviously unique to the comic book world, the way it happens, with both of their emotional build up, is something I could see easily happening in the real world. They both score points in each other, which isn’t a good thing, and Iris angrily walks away.

Stuck back in 2049, a depressed Nora visits Thawne. I have to say, this really smacks of “she can’t learn.” She’s there bemoaning losing her father all over again because she was working with his arch enemy, so she goes back to said villain for sympathy? In what world is that a good idea? She comes to a realization, and asks for yet more help from the imprisoned supervillain, who has to have virtually no security around his cell for these long visits to be happening. Thawne agrees to help, but with a warning about the technique, delivered with an odd smile that makes me think he’s nowhere near as reformed as some would like to think.

Barry goes back to the Cortex, where we learn Cecile has already left and Cisco is off talking to Breacher, once again missing an episode. Cisco has been MIA a lot this season, and I’m really wondering what’s going on with that. Barry tells them about Nora, and the team is surprised, to say the least. Wells supports Barry, touting Wells’ suspicions of Nora all along, and no one is happy to hear it. The man is an amazing detective, but can’t read a room. Ralph, of all people, points out to Wells that this is a family and decision about Nora didn’t include everyone. Barry also at least alludes to the fight with Iris, which doesn’t exactly reassure the team. Ralph makes plans to join Cecile the next day in combing through the Cicada II files, and then Joe takes a call and tells everyone there’s a big problem.

They actually set up two problems for the episode in the next few scenes. Cicada II, the evil Grace from the future (there’s a theme of problems from the future going on. I thought it was the past what was supposed to haunt you?) has gone to the hospital and taken her younger self. There aren’t a lot of clues, and Joe wonders if there’s a code for kidnapping yourself. Meanwhile at Tannhauser Labs, Caitlin’s mother Carla gets an unexpected and unwanted visit from her ex. He stops by to kill one of her coworkers and steal something. Carla, showing she’s both smart and not a hero, hides.

Joe and Barry and Caitlin go to follow up on the robbery/attack, because Barry only does his job when it’s plot-related. They try and figure out why Icicle (Thomas Snow) would have stolen the techno-bauble of the week, and Caitlin and Carla continue their relationship in its usual vein, making Barry really uncomfortable, and leading him to uncharacteristically ditch Joe, but in a very entertaining way. At the West home, Cecile and Ralph pore over the files and folders and find nothing useful. Ralph asks Iris if she’s got anything through her newspaper contacts, and she just sits there, zoned out. After calling her name again, Ralph wanders to the couch and reads over her shoulder what sounds like the start of an unpleasant email to Barry. His only comment is she missed a comma. Cecile tries to offer some advice and Iris leaves. Cecile, with her erratic powers, picks up on something from her daughter-in-law and tells Ralph to go after her. Because when someone is having an emotional crisis, I guess you want to send the insensitive, stretchy detective instead of the maternal empath/telepath?

Iris has gone to the Time Vault and is using Gideon to reprogram the Time Sphere. Ralph follows her, and says he used his powers to slip under the door and wonders why no one has told him about this “secret room.” While he’s making jokes about a hidden bowling alley, I’m wondering how the heck he found the room and could use his powers, considering the way we’ve seen that access work. Iris warns him to not try and stop her, and he has a surprising reply. Mean…when, I guess, Thawne is training Nora in the use of his special time travel technique. When he described it as negative, he wasn’t kidding.

Ralph and Iris embark on their excellent adventure while things stay tense at the Tannhauser lab. Barry probably is relieved when Icicle shows up and attacks, but less so when the villain manages to defeat the hero and kidnap both Caitlin and Carla. I guess he’s collecting C’s. Wells is in the midst of probably overreacting (but I get where he’s coming from) to the earlier scene when the alarms linked to Barry’s suit go off and Wells changes his plans, rushing to the lab to help Joe save Barry.

The aforementioned C’s wake up at yet another off the grid Tannhauser site. How many secret labs does Carla have, and why do you need them if you’re on the up and up? She and Caitlin argue about how to escape and their relationship. Caitlin is raw and hurt, but Carla actually makes a few good points. Icicle comes in, takes a blood sample from Caitlin just above the meta-cuffs keeping Killer Frost out of action, and they figure out he’s trying to switch them to fulltime ice bad guys like he is. I’m really wondering how those meta-cuffs work on Killer Frost, since Cicada’s anti-meta power doesn’t, but I’m betting that’s a plot convenience point.

Iris and Ralph sneak into Iron Heights (the place has security as bad as STAR Labs or the Luthor mansion on Smallville) and Ralph is his usual blend of comic relief and useful help. Iris gets to Thawne’s cell and finds Nora there plotting with him. Things are tense and get worse as Iris’s presence and orders to Nora finish triggering the negative emotions Thawne was going for, and Nora speeds off. Iris and Thawne have a clipped exchange where Thawne offers some advice that catches Iris off-guard. Nora makes a shift, Ralph says they need to go, and he and Iris flee, once again evading a maximum security prison’s guards and monitors so easily it’s not worth showing or even talking about.

Caitlin and Carla talk about what it’s like having Killer Frost in Caitlin’s head, and we get a few reminders about Killer Frost’s past exploits. Icicle comes in, drags Carla out, and blasts Caitlin again, but this time she’s clever about it. Barry, Joe, and Wells use detective work and STAR gadgets to figure out where Icicle is, while Carla gets put into a suitably ominous-looking bad guy/mad scientist device.

Killer Frost follows up on Caitlin’s strategy, and gets free to fight Icicle. He leaves her with the classic villain dilemma of “Save the innocent or come after me.” Fortunately, this is about when Flash shows up, so Frosty can go after Icicle. Flash finds out the device is causing him problems trying to save Carla, and Wells and Joe try and help, commenting STAR is short-staffed at the moment. Cue one timely return for Iris and Ralph. Between them all, they come up with a really weird idea for Barry to use to save Carla, which involves an odd combination of his powers, and him using them contrary to how they’ve been shown in the past.

Icicle and Killer Frost have an ice-bridge chase/cold blast duel that he somehow wins despite the fact that Frost has a lot more experience with her powers and combat. He hurts her badly enough to force her to shift back to Caitlin (that’s not exactly survival evolution there, is it?) and is about to kill her when Thomas makes himself known and manages to take control. Happy reunion time. Oh, wait, it’s a hero drama, we don’t get happy…

The Snow/Tannhauser clan meets up and talks about what just happened while Flash looks on, connecting all the family talk with his current issues with Iris. This gets broken up when Cicada II arrives, blasts Flash, fights Killer Frost, stabs Thomas so he can die heroically saving Caitlin, and takes off with the almost-forgotten about techno-bauble from earlier. The team meets up at STAR, where Caitlin gets over her father’s death in record time and Ralph, Joe, and Wells make jokes about John Stamos in the future. Barry and Iris make progress in fixing things up, as do Caitlin and Carla, although there’s a we saw it coming a mile away note about Carla’s future. Ralph talks Wells out of his earlier plan, Iris tells Barry something he doesn’t want to hear, and Grace talks to herself. The more worrying part of the end is Nora getting back to 2019 (I guess there was a traffic jam in the time stream that let Iris and Ralph get back first) sporting a new look and a not exactly friendly expression.

What I liked: Caitlin and Killer Frost make a good team, and I really liked their escape from Icicle. You really have to give Tom Cavanagh credit: he’s playing two very different people and they are very distinct from each other. After some initial hotheaded stupidity (and we’ve all been there), Barry and Iris were mature enough to talk things out, rather than drag out drama over multiple episodes. Joe is no tech guy and he even comments on that, which was funny, as was Barry running away from the Carla/Caitlin fight.

What I didn’t: Ralph’s entry into the Time Vault and Iron Heights’ laughable security I talked about above. I don’t get how Icicle beat Killer Frost, aside from her being a bit overconfident. I pointed out the inconsistency with the meta-cuffs. I’m really tired of the unstoppable Cicadas. The more I think about it, the more I think Team Arrow is more qualified to handle this villain than Flash and friends.

There were some flaws, but it was an overall decent episode. I’ll go a solid 3 out of 5.