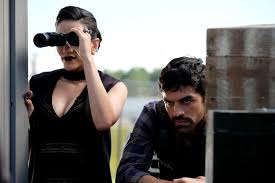 In “eXtreme measures,” the opening flashback is set three years ago in a diner. It’s the first meeting between Lorna and John on one side, and Marcos on the other. They know he’s been working for the Cartel and managing to smuggle a few mutants out of the States on the side, and encourage him to join them in doing that full time. There’s yet another reference to the X-Men being gone, and mutants needing to band together to survive. At this point, I really think they need to devote some time to figuring out what happened to the X-Men, unless Fox is saving that for the next movie or something.

In the now, Marcos gets a very unwelcome call from Carmen, which is about where we stopped last time. She stresses his obligation to her, and keeps calling Lorna “Magnet Girl,” which I’d love to see her try and do in person. Marcos pulls a carved death figure out of a small box and stares at it, clearly upset.

The next day, John tells everyone that Sentinel Services is ramping up their efforts against all mutants and sympathizers. The hard drives they stole might help, but they’re encrypted, and they need time to access them. John is going to go track down Clarice, both because he feels bad about how things happened with her, and because if she gets caught, she can reveal their location. Marcos claims he’s going on a supply run, but insists he’s going alone.

Lauren and Wes continue their flirtation, which is amusing when Lauren calls him a “textbook bad influence.” He does something really cool for her with his powers. Their little sorta-date is interrupted when Andy pops up, sent to find Lauren by Caitlin. It’s lunch time. Surprisingly, Andy actually covers for Lauren with their mother. Over a meal of mac and cheese, they tell us that the new deal is the kids keep doing schoolwork under Caitlin’s instruction, and she lets them train. That seems like a weird deal on several fronts, but whatever works. I’m also curious what makes Caitlin a teacher if she’s a nurse.

Reed and Sage are working with the hard drives. The first one is police files on various mutants. Reed comes to an uncomfortable realization about what Sentinel is doing with the info in the files. After that, he finds a familiar face in the files in some less than ideal circumstances.

Turner is having a rough time being back at work, suffering from flashbacks about his daughter. After he fights through that, he meets with Dr. Campbell. Campbell is pushing to get more aggressive and direct in handling mutants. Turner has his reservations, but Campbell is persistent and ruthless.

Marcos goes to meet Carmen, and that’s not a smooth reunion. She’s very pushy and keeps taunting him about Lorna. Marcos tries to appeal to her, saying he got out of the cartel to fight for his fellow mutants. Carmen is both pushy and seductive as they talk.

Caitlin’s botany lesson is interrupted when Reed shows up to share what he found in the files. They disagree about what to do next, but at least do it rationally. Caitlin goes to find Lauren, but instead finds Lorna’s training session, which she once again objects to. Caitlin asks Andy where Lauren is, since Caitlin thought she was supposed to be training, and he tells her he thought so, too.

Clarice is fighting with soup when John finds her, and she’s not exactly pleased to see him. They talk a bit about what happened, and her current plan, which is to find the stretch of road she kept opening portals to when she was sick. He offers his help and says he owes her, to which she grudgingly agrees.

While Turner’s professional life is made more complicated by a visit from a representative of the Department of Justice, Lorna wraps up her training. She teases Andy about not doing any structural damage before starting to really worry about Marcos. Lorna does some checking up about him, and learns a few things that make her angry. She shares her worries with Dreamer.

Carmen explains her current problems to Marcos, which are mostly that the Russians are moving in on her territory. Marcos lays down some ground rules, and Carmen is very condescending about them. She does at least do some things for him she didn’t have to.

Reed and Caitlin talk with Lauren about their concerns. She thinks it’s about her dating, and gets an unpleasant surprise when she realizes what’s going on. She does some pretty foolish denial, and then storms off after fighting with Reed. Caitlin goes after her to try a one-on-one, mother/daughter approach.

John is using his tracking powers to help Clarice. She’s still bitter and sarcastic towards him, which is somewhat understandable although it wasn’t his fault. John, much more mature and professional, pushes through all that and slowly talks her around into helping him work on the problem.

You know things are getting bad when a fanatic like Turner thinks things are going too far, but that’s what happens. The woman from the Department of Justice tries to lay down the law about what they can and can not do, and has a very convenient medical issue. Turner pushes about what actually just happened and isn’t thrilled with Campbell’s answers.

Reed uses working with Sage on the drives to find a bit about how they select who comes in to the refuge. Lauren has a chat with Wes about what he’s been saying, and not saying. He tells her about his background and how he ended up on the streets.

Carmen keeps pushing and taunting Marcos about their past, and reveals he’s not their only special asset. While that goes on, Clarice reluctantly agrees that John is steering her towards some things that look familiar. They finally end up finding a place that’s important to Clarice. It doesn’t end up being a happy return for her, as she learns what happened after she left.

Dreamer and Lorna are on a road trip to find Marcos. Lorna is pissed, which seems to be her default setting, and Dreamer is urging caution. They have Sentinel Services all over them, they don’t need a war with the Cartel as well. They find Carmen’s place, and get information about where to go next via Dreamer’s power.

The soap opera back at headquarters keeps going, as Reed and Caitlin talk about Lauren now avoiding him. Caitlin suggests he try another approach, and they commiserate over the kids growing up so fast. Reed then goes off to find Wes, and actually does a smart and kind thing, especially under the circumstances.

John and Clarice finish up at the scene of tragedy, and she says she’s in for their cause now. In other developments, Marcos does his job for Carmen, and some of his past seems to be coming back to him while he does it. Lorna and Dreamer arrive there at the worst possible moment, and then leave. Lorna confronts him when Marcos gets back and tries to keep his lie going, and it’s not a good scene.

The various wrap up scenes skip around the cast. The Struckers have a rare family dinner together, and get a visit from Wes who thanks them and tells them what he’s doing next. John and Clarice get back, and Dreamer gives John a big kiss, which he has an interesting reaction to. Marcos gets texts from Carmen about his work; Reed and Caitlin get some alone time; Wes departs; and Sage gets some disturbing information off that government hard drive. As all that happens, Campbell shows Turner his plan for their next step.

What I liked: John is a very honorable man, and I like that he went to help Clarice. I get why Marcos is doing what he is, but lying to Lorna isn’t going to help. The Cartel having their own “special assets” makes a lot of sense and is terrifying. He bumbled getting there, but I like how Reed finally handled things with Wes. I don’t like Turner, but it’s interesting to see that he has his own code. It was a nice moment that Andy covered for Lauren, and she handled Wes well.

What I didn’t: Campbell is just ruthless evil without even Turner’s personal motivation. Carmen is annpoyingly smug and smarmy and makes me want to punch her almost every time she starts talking. I guess that means both parts are well acted, but I really don’t care for those characters. I’d be ok with a bit less soap opera/teen drama moments.

This show continues to impress me. I’ll give this one a 4 out of 5.