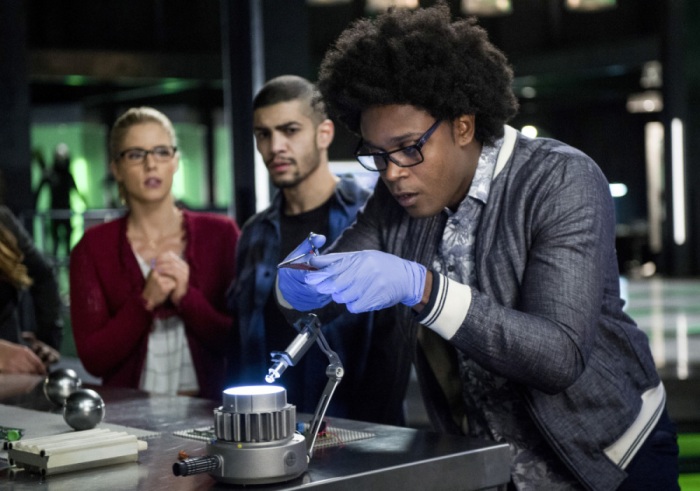 Last episode of Arrow ended with the surprise of Oliver’s cover-up about Detective Malone’s death being released to the media. This episode has its share of surprises along the way, with a big twist I didn’t remotely see coming. I think, overall, this may have been one of their better episodes.

Quentin, Oliver, Thea, and Dinah wade through a mob of reporters hurling questions. Finally they get to Oliver’s office. There’s an amusing bit when Dinah realizes she should be outside the door. Then again, there’s no way someone just sworn in would be protecting the mayor. At any rate the rest of them theorize this is Prometheus messing with Oliver again. As they try and figure out what to do next, DA Adrian Chase comes in with an offer to resign and take the blame. No one wants to go that route. Chase talks about how impeachment hearings work in the city, and Oliver asks Chase to represent him. There’s a lot wrong with that, but I’ll save it for later.

One of the shorter, but more entertaining scene, happens down in the Lair. Curtis  is working on his T-spheres, his comic book counterpart’s signature gadget. Rene comes in and mocks Curtis for working on that while Oliver is in so much trouble. They have a disagreement about Rene’s telling Curtis to stick with his strengths a while back, and Rene actually realizes he’s pushing things. Because of how the T-spheres look, suffice to say ball jokes recur throughout the episode.

Elsewhere in the Lair, Felicity is watching the news about Oliver’s troubles when the man himself comes in. They talk about the impeachment, and Felicity continues her bubbling optimism. With everything she’s seen and been through, I have no idea how she manages that. Oliver asks for her help making things right with Susan, since Thea is refusing to do it.

The Vigilante makes a return appearance, in what must be his armory, which is impressively stocked. He aims one of his many weapons at a tv image of Oliver. Oliver gives another press conference, and tries to talk to Susan, who brushes him off. In a very impressive and intimidating chamber, the City Council begins the impeachment.

Curtis gets a call from his estranged husband Paul, and is giddy about it. Diggle and Felicity talk, first about Oliver’s problems, then about what Felicity is up to. She shows Diggle the Pandora data-catch from Helix. He’s worried about her, and she shrugs it off.

At the hearings, the coroner testifies that Malone’s wounds are consistent with what Green Arrow uses for weapons. She also explains how the cover up came through District Attorney Chase from Mayor Queen. Councilwoman Pollard, Oliver’s political sparring partner from the Spectre of the Gun episode, looks fascinated. Things aren’t looking good for the Queen administration.

In their limo, Thea shows Oliver that she’s really on the dark side. She suggests using Malone as their scapegoat. Since he’s dead, it won’t matter. Oliver is appalled, and Quentin doesn’t look too happy about it, either. The discussion gets derailed when Vigilante attacks, shooting up the limo and causing a very unlikely but Hollywood style car flip. Dinah, from the shotgun seat, blasts Vigilante with her Cry (really subtle). Between them, Dinah and Oliver keep Vigilante busy until the cops show up and he retreats. The medics check everyone out. Surprisingly, even the driver lived. I guess he wasn’t wearing a red shirt. Oliver is very annoyed that he’s going to be taken to the hospital. A very concerned Adrian Chase shows up and checks on everyone, asking about the Vigilante attack.

Thea visits Felicity and wants to dig up blackmail material on Councilman Collins, who is apparently the deciding vote in the impeachment. Thea really is Malcolm’s daughter, no matter how much she may deny it. Spartan and Wild Dog go out hunting for the Vigilante.

Dr. Schwartz ends up being the one checking Oliver out at the hospital, which is convenient as she’s one of the far too many who knows Oliver’s secret. She talks about too much stress being bad for the mind and body. She suggests he needs someone to talk to, but apparently isn’t volunteering for the role. Oliver calls Susan again, but gets her voicemail. Again.

Dinah, somehow in plain clothes and in charge of the crime scene, finds a fragment of Vigilante’s visor. Spartan and Wild Dog come back in to the Lair from their hunting, and say the people on the street are more afraid of Vigilante than of them. Considering everyone involved uses guns, I’m not sure how that works. Dinah calls in to tell them she has the piece of Vigilante’s visor, which Curtis believes he can use, along with his T spheres, to track down Vigilante. While Curtis gets excited about Paul setting up a dinner for them, Dinah gets a surprise of her own. Chase heard her on the phone, she covered with “Family emergency,” and he commented that family is important, and took the visor from her to log in to evidence. Doing a favor or covering something up, DA Chase?

A very unexpected showdown occurs on the rooftops of Star City. Vigilante gets tracked down by Prometheus, who clearly has better intel than Team Arrow. The two fight, and it’s an ugly affair. Prometheus shoves the Vigilante off a roof, then calls a sighting of the man in black in to the police. Prometheus then unmasks, and I was completely surprised by finally seeing who he is.

Diggle surprises Felicity in the Lair, and she admits she’s working on Thea’s blackmail project. Apparently, Councilman Collins’ wife died years ago, and he covered up the fact that it was a suicide. Diggle says this isn’t Felicity, and she retorts that maybe it is now. They’ve definitely got Felicity going down some dark path, and I hope it quits soon. I’d say Barry should come snap her out of it, but since he’s talking about killing people lately too, maybe not. Meanwhile, after some cat and mouse at City Hall, Dinah steals the piece of Vigilante’s visor back.

Captain Pike and Adrian Chase have a talk about the mess with Green Arrow apparently going bad. Oliver goes to Thea’s office and confronts her about the plan to blackmail Collins. They argue, and Oliver is clearly disappointed in his sister. So am I, for that matter.

Through some weird tech-magic that doesn’t really make sense to me, Mr. Terrific uses the T Spheres and the visor bit to lock in on Vigilante. The team races off, and figure out he’s in a building just across from City Hall. As Oliver has a disturbing meeting with Chase, the team starts hunting through the building. Somehow or other, Vigilante is able to hold off the combined forces of Spartan, Mr. Terrific, and Wild Dog. The big fight is interwoven with scenes from Oliver’s press conference. As the team battles, and Mr. Terrific pulls out a few new tricks, Oliver tells the press that Green Arrow has gone rogue and must be stopped. How this is supposed to help Oliver’s position, I’m not sure. Him turning on someone he supposedly was going out of his way to help makes him look like a weasel to me.

Oliver and Quentin are in Oliver’s office and Quentin asks what it’s like to make yourself a villain. Susan comes to see Oliver, and they get a scene together. She realizes he wasn’t behind the attack on her reputation, and is grateful to him for fixing it. Before they get to a decision on their personal involvement, they get interrupted by the announcement that the Council voted in Oliver’s favor.

Oliver goes to share the news with Thea, and they have a long talk. She ends up quitting, comparing her Machiavellian maneuvering to her bloodlust last year. So she quits. First as Speedy, then as Oliver’s assistant. Wow, that girl has a lot of quit in her.

Oliver tries to do a big thank you with the team, but Curtis keeps interrupting. He’s very excited about his dinner with Paul. That ends up going horribly, and I think Paul is acting like a dick for how he handled things. Felicity has a secret meeting to move her further down the path of darkness, and Susan gets a creepy visit that looks bad for her for the end scene.

FlashBack Theater: Anatoli puts off their immediate execution by invoking some weird Bratva rite. Gregor refuses at first, but the men say Anatoli’s right. They need to prove Gregor is cheating the Bratva. Oliver suits up in his prototype Arrow costume and sneaks into Gregor’s place to get the data and force the vote. Gregor, naturally a good loser and not holding a grudge at all, starts a firefight.

What I liked: The Prometheus vs. Vigilante fight was really well done, and the unmasking was a huge twist. I like that Oliver is sticking by his guns and trying to do things better now. For that matter, he’s taking his job as mayor a lot more seriously. It’s good that Mr. Terrific is finding a better way to contribute to the team. I like that Green Arrow wasn’t actually part of any of the big fights this time around.

What I didn’t: Dinah’s rising improbably fast through the ranks of the Star City PD. I hate what they did with Paul and Curtis. I feel like they don’t know what to do with Thea, and just keep flailing around with her. I hate Felicity’s descent into darkness. What happened to Rene’s job as Quentin’s assistant?

While a bit uneven, it was a better episode than many lately. I’ll give it a high 3.5