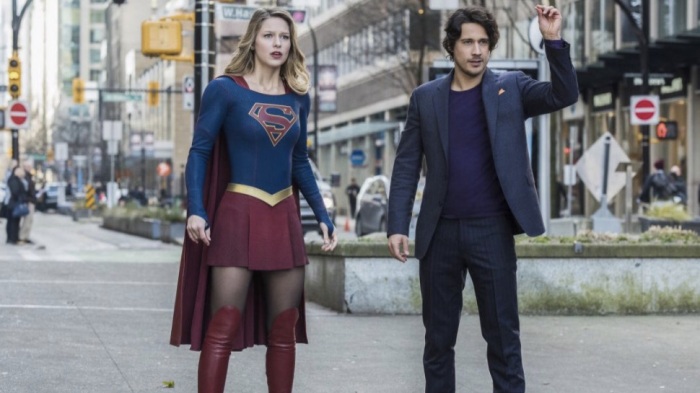 A never welcome guest in the Superman universe…

Supergirl gets a visit from one of Superman’s more powerful and most annoying foes in “Mr. & Mrs. Mxyzptlk.” Like several other classic Superman foes in this series, this seems to be the first appearance of the character in this world, since Supergirl is completely unfamiliar with him. Their best font of Superman knowledge, Jimmy Olsen, doesn’t show up this time around to confirm that. Maybe he’s actually doing his real job, unlike a certain blonde heroine who I’m unclear about how she manages to stay employed.

Last episode ended with Mxyzptlk popping in to ruin Kara and Mon-El’s romantic moment. Using his powers to fill Kara’s apartment with various romantic cliches, Mxyzptlk proposes to Kara. Mon-El’s objections are dealt with a non-harmful but humiliating way. When Kara refuses, politely of course, he goes on about watching her across the dimensions (which sounds really creepy to me) and rattles off the things he can’t do, a bit like the Aladdin/Genie scene in the cartoon. Mxyzptlk can’t make her fall in love, kill herself, stop her killing herself, or drink orange juice. That bit of randomness harkens back to a throwaway line from the one season show Journeyman. Mxyzptlk decides she’s playing hard to get and says he’ll win her over. He vanishes, restoring her apartment to normal.

Back at the DEO, J’Onn says he’s familiar with imps like Mxyzptlk. Mon-El offers that they were banned from Daxam, and Daxamites just killed them. I find it a bit odd these imps pop up on Mars and Daxam, but not Daxam’s sister world Krypton. While Winn goes through the archives looking for references to, and solutions for, critters like Mxyzptlk, J’Onn sends a Valentines message to M’Ggan on Mars. Mon-El asks if he and Kara are supposed to do something for Valentines, and she very practically suggests dealing with Mxyzptlk first. In other Valentines hijinks, Alex and Maggie have a scene where Alex gets a card from her mom and Maggie declares her hatred of Valentines Day. I’m not a big fan of it, I admit, but wow Maggie has issues with that holiday.

Winn goes to the alien bar (Cheers parody- Where Nobody Knows Its Name) to drown his sorrows about being alone on Valentines. Instead, he gets slammed into by a wildly making out couple, then two alien thugs pick a fight with him. Enter Lyra, an attractive alien who kicks the bullies’ asses. She and Winn talk, and she mentions she’s from Starhaven. Winn quotes the one book he knows from that world, which turns out to be a favorite of hers, and she asks him out.

Comic geek aside, feel free to skip this. In the Legion of Super Heroes title, Starhaven is the homeworld of the heroine Dawnstar. The world is described as a planet of relocated American Indians who were experimented on and, most notably, all grew wings. Lyra looks nothing like an Indian, and certainly doesn’t have wings. If they’re going to use the names of established places in the DCU, is it that hard to get them right?

What should be a simple robbery goes horribly strangely for Supergirl. Mxyzptlk pops up and almost kills the robbers in a scene reminiscent of some of Magento’s stunts in the X-Men movies, and Mxyzptlk even says he saw it in a movie. Unofficial crossover?

At the DEO, Winn makes the connections between imps like Mxyzptlk and things like genies and leprechauns. Mon says that on Daxam, they just crushed imps. Since Daxamites have no powers on their homeworld, and imps presumably do, I’m not sure how that worked. J’Onn talks about looking for artefacts that might either send Mxyzptlk home or suppress his powers. In the background, Winn gets a text from Lyra and looks unsure about meeting her that night.

Kara goes home and finds her apartment full of roses, to her exasperation. Alex is with her, and asks for advice about the Valentines situation with Maggie. Kara gives what I think is a decent suggestion, and Alex wonders if some of Mon’s attitude about Mxyzptlk is jealousy, which Kara dismisses. Their sisterly chat gets interrupted by crashes from the street.

Outside, Parasite has suddenly turned up and is on a rampage. Supergirl springs into action and then things get complicated. First Mon-El shows up to help, and then Mxyzptlk arrives dressed in a variation of Superman’s costume. Mon-El does horribly badly against Parasite, which leads to Mxyzptlk mocking him even more. The annoying imp also recognizes Mon as a Daxamite. In turn, Mon-El reveals that he knows how to send Mxyzptlk home: trick him into saying his name backwards. Kara does her best to defuse the situation, and Mxyzptlk essentially announces he’s going to act like a terrorist until she says, “I do.”

Back at the DEO yet again (They must have great coffee there or something, the characters keep showing up there even when there’s no real good reason to), Kara and Mon-El have a very loud argument ranging from how he’s acting, the best way to handle Mxyzptlk, and general character faults on both sides. The highlight of the argument was Mon stopping in mid-rant to offer a casual, “Hi, Denise,” to a passing agent. Kara finally says she thinks the two of them being together was a mistake.

Mon-El goes to see Winn, which historically has never gone well for either of them. Winn asks for advice about girls, which seems like a conversation that would make more sense with his friend James, but like I said, Olsen has the episode off. Winn babbles about the strange things he’s found in the DEO storage archives, and Mon-El steals an amulet that Winn thought showed some promise for handling their Mxyzptlk problem.

Alex attempts to follow Kara’s advice with Maggie and things go horribly. What should be a nice romantic scene turns more into a tragedy. Maggie angrily spills some of her back story (that she lied about) before storming off. I have to say, Maggie is acting like a jerk here, and leaves Alex crushed behind her.  Winn’s date with Lyra goes much better than that, which really isn’t that hard. Supergirl tries to work out how to say Mxyzptlk’s name backwards, which is amusing, and then she and J’Onn realize the amulet is gone.

Mon-El stalks down an alley that looks a lot like the one behind Nameless Bar, calling Mxyzptlk out. Mxyzptlk responds and they agree to a duel. Mxyzptlk shows he follows either American History or musicals as they both end up dressed like characters in Hamilton. The duel goes badly when Mxyzptlk cheats (color me shocked). Supergirl shows up, breaks it up, and agrees to marry the annoying imp tomorrow at noon at the Fortress of Solitude.

After an emotional Kara/Mon-El scene at her apartment (where does Mon-El live, anyway? I think the only homes we’ve seen have been Kara’s and Alex’s), Kara crosses paths with Maggie back at the DEO yet again (I’m telling you, it’s the coffee). Kara gently points out that Maggie handled things with Alex really badly. It’s a polite telling off, but there is definitely an element of, “Stop being a bitch to my sister” between the lines, which I applaud Kara for.

High Noon at the Fortress of Solitude. Mxyzptlk shows up, all excited. Supergirl is there in costume, drinking what I presume is orange juice, harkening back to Mxyzptlk’s earlier exposition about his limitations. She says she won’t marry him, and then fights some animated statues Mxyzptlk sics on her. Supergirl sets the Fortress to self destruct, claiming the blast will be strong enough to kill her and get Mxyzptlk to leave Earth in peace. Mxyzptlk gets frantic about this, and pleads with her for the cancel code. She finally has him type it in, which of course is his name backwards. She is triumphant and he goes home, which is how most Mxyzptlk stories go. Somehow, the Fortress is even restored from the earlier fight as he vanishes.

Winn takes Lyra out for dinner. She looks great in a red dress, but I really wonder about this being a good idea. Not about humans and aliens, date who you want, I’m fine with that. But Winn supposedly works for a top secret organization. Appearing on public with someone who is definitely not human doesn’t seem like the best way to keep a secret. This is the same problem that used to happen in the New Teen Titans book with the Nightwing/Starfire romance.

Alex and Maggie patch things up when Maggie makes a really big, movie-level romantic gesture. Mon-El and Kara also clear the air about their earlier argument. Mon is actually humble and apologetic, which is a big step for him. They end up making out on the couch. Happy Valentines Day to all, and to all a good night, or something like that.

What I liked: While it was a tiny bit overdone, I liked the Alex/Maggie subplot. I particularly liked Kara standing up for her sister. It was nice to see something go well for Winn on the personal front finally. I don’t much care for Mxyzptlk in general, but he was done reasonably well here. Kara was clever in getting rid of Mxyzptlk.

What I didn’t: A while back, Winn was supposed to be making a suit for Mon-El’s super hero career. So far, he’s just running around in what looks like a DEO jumpsuit. Did they forget about that? As I mentioned above, and at the risk of being “that guy,” the Starhaven thing annoyed me. And once again, the vastly powerful Martian Manhunter does absolutely nothing that any normal human couldn’t have done. Shouldn’t he at least be following up on Lillian Luthor running around loose with the Cyborg Superman, based on the man whose life he kinda stole?

It was an amusing episode. I’ll give it a 3.5 out of 5, and be quite happy if Mxyzptlk doesn’t show up again. Although if they stick to a holiday theme with him, he could make for a really interesting Easter Egg hunt…