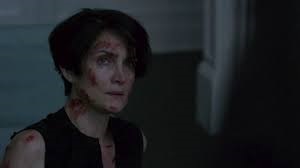 Continuing my bid to catch up before Cage debuts…

“AKA 10,000 Cuts” is the tenth episode of Jessica Jones’ Netflix series, and it is one of the most tension-filled, violent, and hard on the cast shows they’ve done yet. A lot of things go badly here, and very little of it is Jessica’s fault, although I have no doubt she’ll blame herself. That’s what she does.

This starts up right on the heels of the debacle that was the end of the previous episode. Kilgrave has escaped, proving persuasive even when his powers are blocked. He did get wounded, but he pushes on, grabbing up Jeri Hogarth as a hostage (and she really deserves it). Of course, he needs medical help for his wound, and what doctor would be on Jeri’s mind? Wendy ends up with some very unwelcome guests, and things get even uglier. Kilgrave has a small tantrum which seems based on his utter sociopathy. He really doesn’t get how other people work in regards to feelings. He then sets the not quite happy couple against each other in a brutal way that reflects the episode title.

Back at the no-longer safe house, Jessica deals with the aftermath of Kilgrave’s escape. She does a very clever thing to get around Kilgrave’s command to Trish. Jessica is good at thinking on her feet, and has had more experience than probably anyone else alive with Kilgrave’s powers. It makes sense she can find a loophole. They also find evidence that Jessica’s special failsafe was sabotaged. Jessica, Detective Clemons, and Albert (Kilgrave’s father) compare notes on what’s going on, and Albert reveals some of the mechanics of how Kilgrave’s power actually works. Trish takes Albert somewhere else to hide him. Finally, Jessica leaves in pursuit of Kilgrave, leaving Clemons to secure the wreckage of the plan.

The holding facility where they almost managed to keep Kilgave is getting a lot of traffic. People keep coming and going. Two of the characters meet up, one of them no longer in their right mind due to something other than Kilgrave. There’s a confrontation and some ugly things happen, and the cast gets a bit smaller. It was a well written scene, but it really pushes someone over the edge in terms of possible redemption. It also pretty much ends the chances of the place being used again in the future.

In a pair of ugly scenes, we see a few developments. The Jeri/Wendy/Pam triangle ends, with no one getting what they want. It was nasty, and I didn’t see that one coming at all. Jessica has a run-in with Robin and Malcolm, dealing with the aftermath of Reuben’s disappearance. What I thought the scene really highlighted was how good a person Malcolm is, and how utterly obsessive and a mess Robin is.

Trish is in hiding with Albert, hoping he can come up with a way to block Kilgrave’s powers. Kilgrave makes some moves of his own, up and around distressingly quickly after his bullet wound. He taunts Jessica at her apartment, and tells her what he wants. He’s used his powers to get Hope freed, and will swap her for Albert. They argue a lot about their mutual past, and Kilgrave taunts her with the safeguards he set up to ensure he walks away from their meeting.

In another horrible example of Jessica’s utter lack of luck, events kick off she has no idea about. Robin hijacks Malcolm’s support group, and whips at least some of them into a mob that really should have been carrying torches and pitchforks. They storm Jessica’s apartment and manage to find the limits of some of her powers. Jessica, while a good bit stronger than human, really seems to have been shorted in the invulnerability department. The mob manages to take her down and once again snarl up her plans about Kilgrave, putting themselves in a lot of danger in the process.

The end of the show races to a rough conclusion. Trish and Simpson have an argument about how he’s acting, and she ends up both kicking him out of the hotel room she’s hiding in with Albert, and stealing some of his combat meds. Albert seems to know a bit about Simpson’s meds and possibly the program he was part of.

Kilgrave has set up a hostage exchange, and he’s very smart and careful. He has the angles covered, with a few extra nasty surprises. The situation doesn’t go the way anyone hoped for. There’s a lot of tension, taunting, hostages, victims, and Kilgrave thinking he has it all covered. What actually happens surprises even him, as we lose another cast member. Jessica has her work cut out for her after she makes a promise to do something she has said she will never do.

What I liked: This is a really great series with some great writing. The twists and turns of the plot have been keeping me guessing, and that doesn’t happen a lot. All the conflicting motivations are making a big mess, but it’s believable that they all want different things and that this is leading to some nasty collisions.

What I didn’t: Not a lot, really. Jessica came up with some great ideas, and most of the things that went wrong were beyond her knowledge or control. I feel bad for the characters that died this episode. Pretty much every one of them was caught in something they didn’t even know was happening.

I’ll give this one a 4.5 out of 5. It was a really good episode that’s building momentum for the finale.