And so we’ve come to the end of the epic Death of Superman story arc!  Part 7, which was published in 1993 as Superman #75 , is basically a money shot heaven for comic book fans hungering after splash page after splash page.  This completes that whole “counting down” to Superman’s death with each of these final parts having one fewer panel per page than the one before.  This also makes covering the blow-by-blow dissection of this issue very easy for me.  So, without further delay, let’s get ready to RUMBLE!!!!!!!! Superman and Doomsday are having it out in downtown Metropolis while lazers rain down on them from the Cadmus shocktroopers flying overhead.  Unfortunately for Superman and the rest of Metropolis, it doesn’t seem to be stopping the monster.

Doomsday tosses Superman into a poor shocktrooper causing them both to fly into Lois Lane’s news chopper.  Superman is able to save the chopper and put them down safely.  He laments that he cannot take them as far away from the trouble as he’d like because he just doesn’t know how many lives Doomsday will take while he’s gone.  As Superman prepares to go back into battle, Lois begs him to retreat and get some more help, but he already knows the JLA has fallen and there’s no one else to come and help him.  So the two lovers enjoy one last kiss before he hops back into the fray. 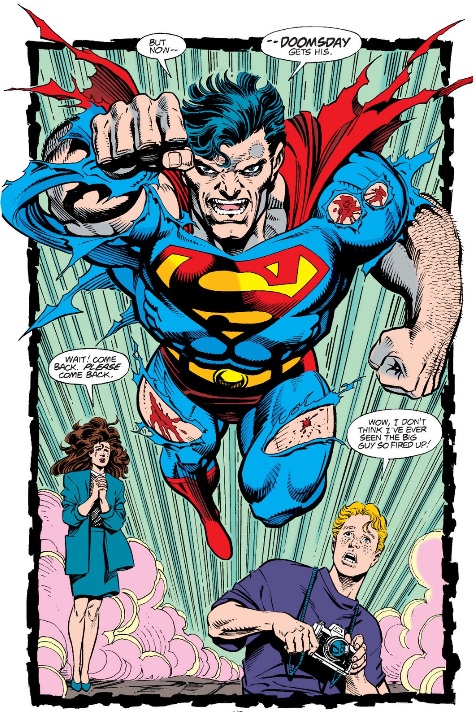 But that just gets his face smashed into the concrete. 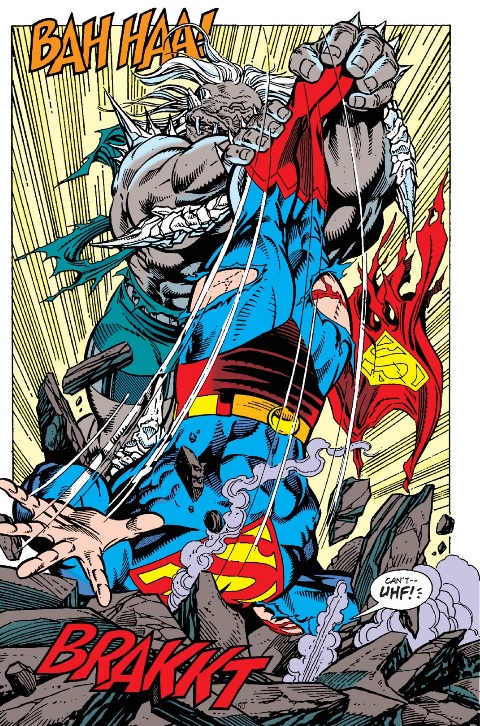 Lois tells Jimmy that they need to help Superman, but they get dangerously close to Doomsday in the process.  Superman digs himself out of the hole he was put in to deliver a massive blow to Doomsday’s kidneys.  With Lois and Jimmy so close to the action, Superman realizes that in order to stop the monster, he mus tbecome as ferocious and unrelenting as it is.  The two trade harsh blows that rock Metropolis to its core.  Doomsday’s bony protrusions slice Superman’s flesh with every punch, but it leads to Superman’s greatest discovery against him.  The protrusions are extensions of Doomsday’s skeleton and when Superman breaks off pieces of those bones, Doomsday wails in pain.  With Doomsday finally feeling pain, both fighters put everything into one last punch… One last attempt to bring the other down for the last time. With that final bash, both fall…

All who look on bear witness to the darkest day anyone could ever imagine.  With what members of the JLA not in the hospital realize too late, no one is able to keep the Man of Steel from breathing his last.  This was the day that a Superman died…

To this day, The Death of Superman is still the highest selling story of all time.  While 1991’s X-Men #1 may have sold more individual comics than any other, this one is the undisputed king of the trade paperback market.  It takes this crown with good reason too.  Whether or not you were there buying each and every issue of the story yourself, you absolutely knew it was going on.  If nothing else, it generated a whole bunch of curiosity.  That’s how I came to get the collected trade paperback myself.  I may have been out of the comic buying scene at the time, and I always grew up a much bigger fan of Marvel than DC, but if you grew up on comics, there’s no way that you aren’t at least raising an eyebrow at the idea that Superman was getting killed. Yeah, yeah, forget about the obvious gimmick of it all – you were still curious if DC was for real or not. Still, the point to it all was clear.  Starting about a decade before, comics were growing with their readers.  The 80s brought with it a new sense of action and machismo.  Rambo, Rocky, Chuck Norris, Commando…  These guys were the ones you rooted for in R-rated movies.  And, kids, to be young in the 80s was truly glorious.  We were allowed into R-rated movies with nothing more than telling the box office jerk that your mom said it was cool for you to be there! Anyway, all this R-rated action was bleeding into everything.  While Marvel and DC was still telling their mostly PG-rated stories, indie publishers were pushing envelopes.  By the mid-80s, Frank Miller and Alan Moore proved that intensely dark superhero stories could sell and BOOM!  The market exploded into much darker characters taking the center stage.  Marvel had their Wolverine, Punisher, and Ghost Rider books (or at least by the early 90s they did).  DC was throwing Batman, Hitman, Vigilante, and entire line called Vertigo at you.  Where did that leave the sunshine heroes like Superman?  Well, he was becoming passe.  He was cheesy and was falling way out of popularity because of his high moral standing. We all know the story of how the Superman writers would attend an annual retreat to talk about storylines and what they want to do and how Jerry Ordway would always suggest (albeit jokingly) that they kill off Superman and so on.  We all know that they finally decided to do that very thing.  It’s kind of a way to say to the world that Superman was not something to be taken for granted.  He was every bit as important to the world and culture as these dark anti-heroes that were selling by the early 90s. While his death wasn’t permanent (DC wasn’t stupid), it did get people to care about Superman again.  For the outsider, they really thought he was going away forever.  For fans, DC gave you a taste of what the world would be like without Superman with the follow up arc, Funeral for a Friend (also known as A World Without Superman).  You also saw the disastrous outcomes when others tried to fill the hole left by Superman’s death. One such hero who would heavily affected by Superman’s death would be Hal Jordan, Green Lantern.  When Superman was still working his way back from the land of the dead, a cyborg Superman came along to try to take his place.  This cyborg was actually a maniacal villain and when he and alien badass Mongul destroyed Hal’s hometown of Coast City, Hal didn’t take the news too well.  This would cause Hal to spiral into his own madness and turn him into Parallax – a twisted villain who massacres the Green Lantern Corps and nearly wipes out the entire DC Universe at one point.  In a final act of redemption, Parallax ultimately sacrificed himself by reigniting the Sun to save Earth from being destroyed.  He’d become the Spectre for a brief stint before being reincarnated himself. Ultimately, Superman’s death wasn’t just all wrapped up nicely in one story only for him to come back some months later.  There would be rippling aftershocks for years to come.  Questions about his existence actually even being awe-inspiring would last well into the 2000’s when Batman, at the start of Infinite Crisis, tells Superman that the last time he inspired anyone was when he was dead.  Tendrils from this story would continue spread out until the New 52 reboot.  You can say that his death and resurrection started an over-used plot device of doing the same for both DC and Marvel, you wouldn’t be wrong in that unfortunate assessment.  However, this “first” story (I use quotes only because this wasn’t really the first death and resurrection in comics, but certainly the one that started all these instances these days) is still a memorable one.  It is, when you get right down to brass tacks, a very effective story that delivers on the hype. This wraps up our look at The Death of Superman.  We’ll be back later in the Summer with more looks back on the awesome stories of the past!  I leave you now with one of the most famous comic book images ever.