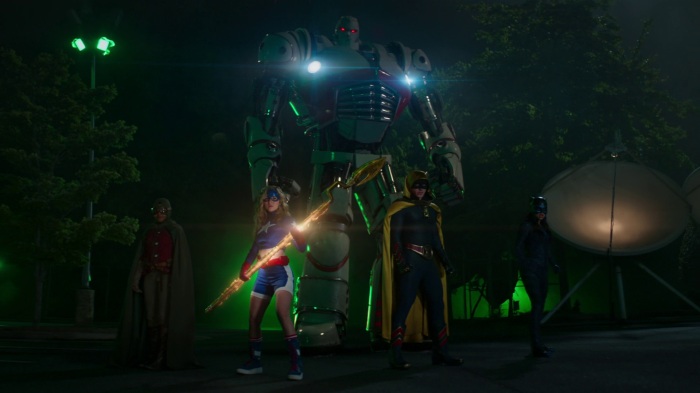 They have a lot of work to do, but they pose nicely.

They do a few interesting things in the sixth episode of Stargirl. The team sort of gets together, we see just why the bad guys are so dangerous, and there’s a great scene where Courtney finally sort of connects with Pat on a real level. I’m really enjoying this series, even after the questionable fourth episode. They chose a good title as our heroes finally start, slowly, to unite to try and become “The Justice Society.”

The episode starts off on a very different note, as the Mortal Kombat theme plays over a football practice. Artemis Crock, who we’ve seen before, proves to be a very aggressive player who doesn’t appreciate static from other players. The coach benches her, rightly, to the displeasure of her parents. The coach stands up to her parents, which proves to be an issue later. They are, of course, Sportsmaster and Tigress, and the villains prove to have poor impulse control at an unusual after-school meeting with the coach. Elsewhere, showing the usual CW disdain for secret identities, Stargirl flies home without her mask on and sneaks into her room. Pat is waiting there for her, and confronts her about her theft of the JSA’s equipment. He’s very displeased with her, understandably, and gives her some instructions she’s not happy with. Later, he looks at Rex Tyler’s journal while he packs things away.

Icicle has a restless night’s sleep interrupted by a call about what Clan Crock are up to, and goes to deal with it after a brief talk with his son. He finds the villains cleaning up after an earlier incident and gets them ready for a special assignment, which thrills them to no end. Breakfast at the Dugan-Whitmore home shows Mike being a classic kid and doing a science fair project at the last minute, telling the adults not to come. Courtney comes down and there’s a great deal of tension between her and Pat. Later, Pat goes to see Rick Tyler. Yolanda is being very enthusiastic about her new role in life, and studying up on the previous Wildcat, identifying with him. Courtney loses her nerve about her mission from Pat. She similarly strikes out with Beth, who has really bonded with the AI in Dr. Mid-Nite’s goggles. While the others are in school, Pat brings Rick to his garage, shows him the damaged truck from last episode, and tries to get through to him about needing help.

Over lunch, Courtney finally gets up her nerve to talk to Beth and Yolanda, and it goes badly. Pat and Rick’s talk goes poorly as well, after a lot of Easter Eggs from various aspects of early DC history. Back at the school, there’s another football practice, and a tense meeting between Sportsmaster and Tigress and Sharpe, the Gambler. They clearly don’t like each other, which we later learn is a variant on the jock/brain rivalry. Barbara surprises Mike at the science fair, and it’s a nice, touching scene. They easily could have cut it, but I like what it added. At the end of the school day, Courtney tries again with the others, loses control entirely, and they end up planning out a mission to take down the Gambler. Four teens with powers and/or gadgets should be able to beat a normal, older, hacker, right?

Artemis is bemused by her parents going out and their unique instructions before they go. As the camera pans through town, we see the theater is once more hinting at the wider DC Universe, playing “Strange Adventures,” which was an anthology comic that featured, among others, Animal Man, Adam Strange, and Deadman. Icicle and his son observe a sad anniversary, have an awkward moment with a well-intentioned waitress, and end up showing the son may be following in the father’s footsteps. Barbara and Mike get in some more bonding, confusing Pat as he stops by then takes off again when he hears Courtney isn’t home.

The newly costumed Justice Society 2.0 (O for Oh God, What Are They Doing?) springs into action and shows they have absolutely no experience, leadership, tactics, or teamwork. The Gambler gets down to business, and shows just how ruthless he is. When the young heroes start catching up to him, they look sickened by what they find. Sportsmaster and Tigress show up, Stargirl tries to take charge, and things go off the rails. What follows is a lot of action, some good scenes, and a perfect example of how skill and training can overcome raw power and blunt force. Simply put, the kids are outclassed and get their asses kicked all over the building, while the Gambler is easily able to accomplish his goal. The new JSA might have ended right there, but they get backup at the last minute in the form of Pat inside STRIPE. The villains get away, which was never really in question, but the kids at least manage to survive.

Back at the garage, the newer three admire STRIPE and revise their opinions of Pat slightly. With some really amusing writing, Courtney vents to Pat about how things went so badly, and then finally realizes some of what he’s been trying to do. You can see the lightbulb go on over her head, and it’s a really well written and acted scene. Pat finally, reluctantly, agrees to some of what Courtney’s been wanting. Elsewhere, the Injustice Society meets up and talk about furthering their plans and dealing with the new generation of heroes.

What I liked: It wasn’t a major part of the show, and didn’t need to be, but I really enjoyed the Barbara and Mike scenes. I’m glad at least Yolanda is doing some research on who came before her. The fight was great and showed the rookies just how much they still have to learn. Sportsmaster and Tigress were fantastic. I’m really enjoying the constant little Easter Eggs they throw in for hero geeks like me that won’t affect the enjoyment of the show for people who don’t know them. That can be a tough balance. Dr. Mid-Nite is clearly not ready for a fight, and they used her just right in the big battle. In their twisted way, Sportsmaster and Tigress were amusing to watch. The scene with Icicle and Son was also done well.

What I didn’t: I am getting really, really tired of heroes running around without their masks on. It happens in about every single tv show and movie, and I’m really over it. I’m wondering if we should be worried about Pat and Barbara’s marriage—when was the last time they really had a scene together? I don’t really like the concept of the JSA reduced to props, but I’ll reluctantly say they did a decent job of it with this episode.

I’ll go back up to a high 3.5 out of 5 for this one. The fight really impressed me, as did several of the scenes. I’m willing to bet we’re about to see a lot of training coming up.