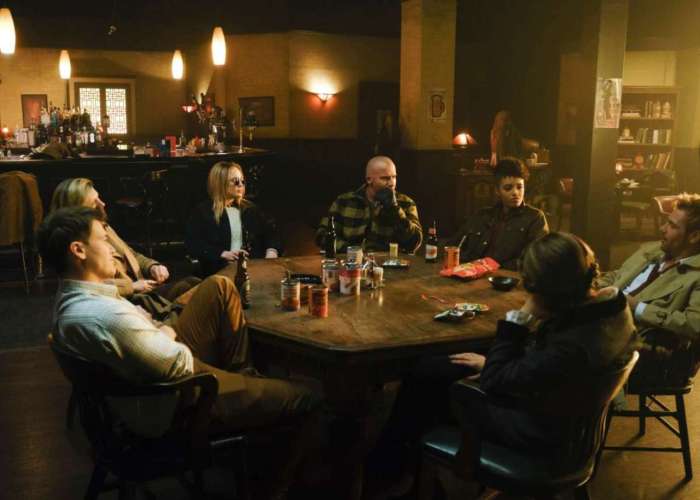 Zombie outbreak ends up in a pub. I’ve seen this somewhere…

Last episode, the Legends finally managed to drink from Dionysus’ chalice to gain temporary immortality and so safely use the Loom of Fate. Now they have to get to said Loom and avoid various pitfalls along the way. Nothing goes to plan, even by Legends standards, and a lot of weirdness happens as they try, borrowing a phrase, “To put right what once went wrong.” They give a nice nod to a classic sci fi novel (and less classic movie) with the title “I Am Legends.”

Zari starts a timer for the team’s limited immortality, and they decide to get back to the Waverider. Unfortunately, the portal to the ship is gone, and the Legends are marooned in England. The Waverider isn’t staying put either, taking off under the control of Lachesis and Atropos, with their new convert Astra and a very confused Gary Green ending up in a sort of Diehard situation. The others immediately suspect Astra, who Constantine defends as they try and figure out what to do next. Apparently teleportation isn’t in the warlock’s bag of tricks as they end up heading for London via bus, which detracts a bit from Ava’s rousing speech. Sara is once again hiding visions, the team has money problems, and Mick adds another felony to his sheet. Or whatever the equivalent is in England.

On the stolen Time Ship, Astra argues with Lachesis about what’s going to happen next. Astra has a unique list of demands, which Lachesis at least pretends to listen to while Atropos is sent off to deal with the Legends. On their bus, Constantine gets static from Zari about smoking and Sara makes a request of Ava. Atropos prepares for her mission while Gary keeps sneaking around on the ship. At least he doesn’t end up in an air vent or defenestrating someone. The bus trip gets worse when the team runs into the beginnings of a zombie apocalypse. Atropos was able to do a small version of this before, but now she’s apparently gone wholesale, and things are getting ugly. We learn one of the team is of no interest to the undead, and there’s lots of fighting.

Gary tries to get Gideon working again, and ends up with some unexpected results and a new mission. With the bus no longer working because of sloppy fighting, Constantine and Zari go off to find other transport while the others… just kind of hang out? It was vitally important the team split up for Plot Reasons. Lachesis comes up with a way to talk Astra out of her major demand, and it’s an ugly one that Astra wasn’t prepared for. Zari and John snark at each other, discussing resurrections, unchangeable moments in time, a lost leader’s wisdom, and the wizard gets another smoke break after all. While Atropos hurls blades at a trophy from the Legends’ past (and how is she causing zombies if she’s still on the ship?), Gary and his unexpected ally do something heroic to slow the villains down.

The majority of the team hangs out on their broken bus while Ava second guesses herself. Some possible help arrives, but things take a turn for the worse. For once, it’s the Legends making rational arguments and a different group arguing against them. The Fates realize what they’ve lost, but Astra is still helping them and homes in on a suspect at once. Gary gets in some amusing breaking the fourth wall jokes before hurrying off to try and get the team back aboard their ship. Zari and John keep bickering, and there’s what sounds vaguely like a reference to Stephen King’s Christine. Are we sure this isn’t a Halloween episode? The two get surrounded, Zari makes a heroic suggestion, and John comes up with a different plan.

The Legends stage an escape, drawing on Mick’s past experiences and Nate’s powers (hey, they remembered!). Ava’s leap of faith has an odd hand gesture I suspect Jes Macallan improvised and the directors either let her keep or didn’t notice. A bit the worse for wear, they stagger off, still trying to get to London. John tries a desperate gambit which, eventually, works, and he and Zari ride off to the rescue. How they know where to find the others is one of those things we’re not supposed to think about. Gary almost succeeds at saving the day, falling afoul of two of the bad guys and learning a surprising truth about his new ally. I was close, but not quite right, in my guess.

The team makes it to the Time Bureau safehouse in London, and gets none of the help they were expecting. Zari finally loses her positive attitude and stalks off for a sulk/cry. John follows, and something I, at least, found utterly predictable many episodes back happens. Astra throws herself into the role of interrogator, and, surprisingly, between snivels, Gary actually manages to turn her back a tiny bit toward the light. Regrouping in their temporary base of operations, the Legends talk about the Loom, some drawbacks to using it, and have a surprisingly warm group moment. Seeking a quiet moment, Sara slips off to drink, and Ava follows to push for some answers about something that’s been bothering her. Nothing looks good as the city is in ruins, time literally runs out, and they are surrounded, tipping things towards a dark fate Sara saw. Astra’s repentance comes a bit too late as she gets an ugly surprise on the ship. I will point out this is actually a stupid move on Atropos’ part, as it means they can’t do something she and Lachesis have been wanting to for a long time.

Things get bad enough that the Legends engage in a last stand, whether it makes sense or not. After some debate, they manage to send one of them back to the ship while the others heroically sacrifice themselves. At least two of them should have survived this total team-wipe, but it doesn’t look like they did. The sole survivor gets back to the ship, has a brief moment of hope before seeing someone else get killed and then apparently turning traitor. It’s a hell of an ending and Legends of Tomorrow, unlike most of the other Arrowverse shows, actually got in a full season so they have a few episodes left.

What I liked: There were some nice nods to zombie classics. They at least sort of remembered Nate had powers. Zari had some realistic reactions to fighting zombies. They actually referenced Rip Hunter for the first time in a long time.

What I didn’t: The Waverider, apparently like every other CW base except Black Lightning’s Grotto, has zero security. There were a lot of small plotholes in this episode, like the team splitting up for REASONS, and Nate near the end. I’m not a fan of the John/Zari plot. The Fates now seem to be working against themselves.

I love the show, but sometimes it makes relatively little sense. I’m giving this one a 3 out of 5.