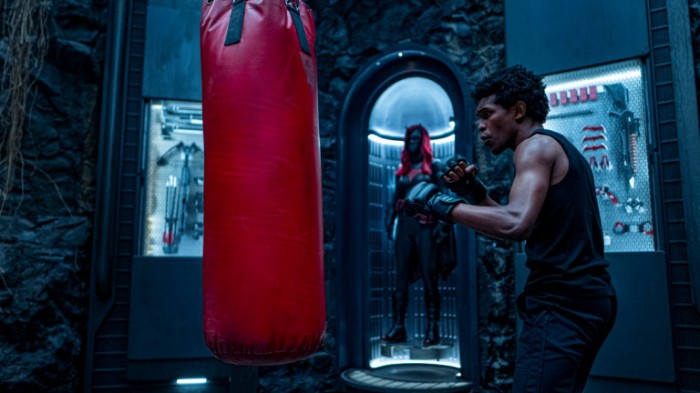 Luke’s not just the brains

Kate shockingly broke the hero code (which doesn’t seem to apply to most CW heroes anyway) when she lost it and killed August Cartwright. I’d argue the world is a better place without that psycho, but it’s taking a toll on Kate. This episode deals with repercussions from that, a new version of an obscure comic book foe, and more on the death of Lucius Fox. There are a lot of balls in the air for “A Narrow Escape.”

The episode opens with videogaming, day-drinking, and sister-bonding with Alice/Beth and Kate. This goes on long enough to really make you wonder if you missed an episode before they do a really nice transition back to a lot less-nice reality. Also not having a good day are a crook who gets caught by Batwoman, and Batwoman herself who has some serious PTSD/flashbacks going on after her foray into homicide (arguably justified). Luke is concerned with what the vitals in the suit are reading as she freaks out, and we get another dramatic and utterly foolish “ripping the mask off in public” scene. In the background, the Bat-signal lights the night sky, although once again, we don’t know who would have sent it up. The Crows are still hunting her, and as far as we know, the homophobic idiot is still in charge of the GCPD.

One week later, things aren’t great. A cop wakes up in a really bad situation as we both see how the villain of the week works, and that, as usual, heroes are rare in the GCPD. Vesper Fairchild comes back for another voiceover to wonder where Batwoman has been the last week, and tell us about the Detonator. In the comics, he’s part of the League of Assassins, here, he’s apparently a serial killer who Batman himself was unable to catch seven years ago. At Mary’s clinic, a very unusual patient is brought in who has been trying to take up some of the slack. Mary, understandably a bit bitter, goes on a mini-tirade.

As it turns out, our missing hero is on her couch. Her mental issues have clearly not gotten any better, as we learn when recurring guest Julia Pennyworth shows up. Julia tells Kate how Bruce would have reacted to all this, then gives Kate a not-quite-pep talk. At Arkham, Mouse seems to be adapting well to life in captivity, Tommy Elliot has undergone a surprising change, and Alice is more than ready to get out. Elsewhere, Bobby Reeves, the defense attorney we’ve seen a few times, gives a news conference about his late client Reggie.

Working on their own, Julia and Sophie (man, Julia’s everywhere) are making a conspiracy wall about the mess surrounding Lucius Fox’s murder. They get a lead, but it gets derailed before they start by an ongoing crimewave. There’s a very weak plot-point in this scene that shows the writers don’t get how computer backups really work. At the Batcave, Luke is working the heavy bag hard, and not hugely receptive to Kate’s questions, firing a few of his own back at her. In another of the series of overlaid scenes the show is quite good at, Kate and Luke discuss the current crime wave as Jacob Kane does the same with his Crows. A part that doesn’t work is Kate knowing a military code that Bruce Wayne didn’t. I just don’t buy that for a moment. At any rate they zero in on a suspect that apparently everyone else missed in the initial hunt. After an ironic comment, Luke shows Kate some new toys, but her PTSD kicks up again and she’s going into the next phase of the case as Kate, not Batwoman. Luke is worried, but Kate isn’t offering any explanations, just cryptic comments.

In Arkham, Alice begins a plan to get out. I will say this much for her, she’s committed. Kate plows ahead on her mission which could seriously jeopardize her secret. She does learn a lot of interesting things, but doesn’t get the result she was expecting. Attorney Bobby Reeves has a very bad day as he’s next up on the killer’s hit parade. Alice goes to extremes while someone in serious trouble makes a call to Jacob Kane. Jacob demonstrates some good detective skills in this scene.

Kate gets back to home base to talk to Luke, and gets briefed on the current situation. You know what the problem with having an underground, unlicensed clinic is? When the cops are doing a full evacuation of the neighborhood, they don’t know to come looking for you. Mary desperately tries to get her patients out, helped by her unusual “guest” from earlier. The scene shows that Kate Kane is far from the only hero in Gotham. The Crows and PD (Why is there even a police department in Gotham at this point? They never seem to do much.) do what they can to minimize casualties, and when things go bad, the only ones affected are the ones the authorities didn’t know were there. Kate shows some really bad timing in this scene. In the aftermath in the clinic ruins (I wonder how they’re going to manage to rebuild that), Mary shows once again why she’s my favorite character on the series at this point, giving Kate a lecture she needs to hear and reveals a secret.

While Mouse makes his move at Arkham, Julia and Sophie pool information and resources with Luke. They start to work out what’s actually going on, and it’s not what it seemed. Still plagued by her trauma, Kate nevertheless manages to finally suit up. While Jacob finds himself in a lot of trouble, Batwoman has a motorcycle chase through the city to catch up with their main suspect, which has a dramatic ending about as realistic as the end of Joe West’s car trouble on the last episode of Flash. I guess all the CW writers failed physics. The different groups working on the conspiracy start closing in on the truth. The surprises come when Luke goes from mild-mannered tech help to really pissed off survivor of violent crime. He and Kate have a good heart to heart as they are saved by the foresight and planning of Bruce Wayne. This scene, too, has a needless unmasking and some questionable physics for the big ending. On the other end of things, Sophie manages to save Jacob.

The wrap up scenes set up some new developments, and reveal a major secret from the past. Sophie gets a welcome development in her professional life, and Julia gets an unlikely one. Luke drops a bombshell that may actually explain why Batman and Bruce have been missing for five years, and sheds some light on his father’s murder. We get a bad pun in the newspaper, and a new status quo with Mary that Luke does very badly with. The last thing we see is Alice making her own adjustments to her situation.

What I liked: I get Kate being traumatized by what happened. I don’t mourn Cartwright’s death, but I also prefer my heroes to be the non-killing kind, so I’m a bit torn on the whole thing. Mary was awesome, and her special guest was really someone special I hope we see again. I’m glad we’re learning more about Lucius’ death. I was stunned by Luke’s reveal at the end, and it explains so much. It was also nice that, even though he’s gone, Bruce is continuing to help protect Gotham.

What I didn’t: There were a lot of minor flaws in the episode. I don’t know if there was rushed writing with the pandemic, or they just slipped up a bunch of times. The physics issues were bad, the computer backup bit was just dumb, and I don’t buy for a moment Bruce missed that clue. I get she’s going through some things, but Kate really needs to cool it on the unmasking unless she wants as many people to know her secret as… well, all the other CW heroes. These guys collectively don’t do to well with the “secret” part of secret identity.

It was a very uneven episode, good on concepts, bad on some details. I’ll give it a low 3 out of 5. Maybe they need a slightly better editor?