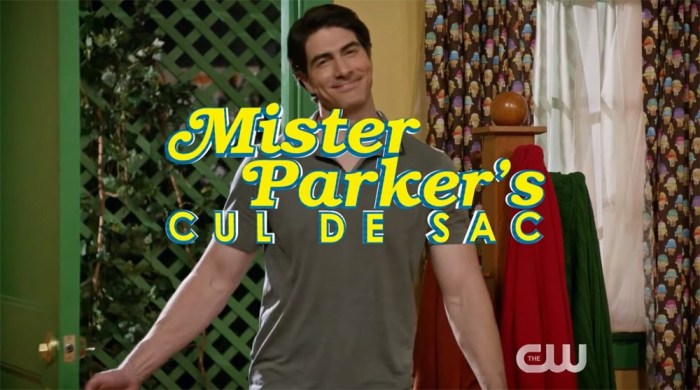 Because of course it’s Ra

The Legends of Tomorrow have gone through a lot in their five seasons. Crew have come and gone, menaces have threatened and fallen, and the entire focus of the show has shifted several times. It’s a different show than it started off as, and it’s become one of my favorites. Now, things start going through some more big changes as an unexpected Encore with ties to the team shakes things up, and someone makes a life-changing decision. There’s all this and a nod to a childhood classic in “Mr. Parker’s Cul-de-sac.”

As you might expect from a show where time travel is such a big part of it, the episode has ties to the past. There are clips from the team’s time in the Wild West, and the various events that led up to the death of magical villain Damien Darhk, played by the ever-entertaining Neil McDonough. This is the only episode that they go to the Old West era and don’t meet Jonah Hex. Two years ago, subjectively, Gary is cleaning up after the Beebo debacle and gets an unpleasant visitation. On the Waverider in the present, for whatever that term is worth here, Constantine explains why he wants the Loom of Fate, but Charlie and Sara both disagree. When Ava’s new gadget alerts the team to new Encore activity, Sara tries to rally the team but realizes they’re off the ship.

After Constantine’s brush with death and life advice, Ray has decided to act on his feelings, preparing a very fancy dinner for Nora with a special surprise in store. Behrad and Nate are there to act as moral support, and even Gary is helping out. Nora arrives, certainly surprised at the elaborate preparations, with her current “client” Pippa along for the ride. In the Waverider’s library, Constantine deals with nicotine withdrawal and information deficit. He gets some advice from Nate, but all is not as it seems. Trying to get someone to come along, the cowgirl-ed up Sara and Ava drop my Mick’s room, but he’s dealing with some issues from his Rebecca Silver career (didn’t he give that up?). Sara is surprised to see Zari’s still on the ship, but details her to assist Mick.

In Constantine’s kitchen, Gary is working on the meal for Ray, but weirdly blinks out of existence. Apparently, he almost died in the past, but Ava and Sara managed a last-minute clichéd rescue. As time paradoxes are dealt with, Nora opens the door at Constantine’s place to find an unexpected visitor: dear ol’ departed Dad Damien Darhk. He leaps to a lot of conclusions about her life, and she plays along. There’s a throwaway line about how he found her that I think is setting up for events in the near future. Nora hatches a desperate plan and Ray, being Ray, goes along with it.

Playing on her past as a social media celebrity, Zari gives Mick some advice about how to handle his unexpected attention. Ray brings Pippa to the Waverider to keep her out of the way of the Darhk drama. To pass the time, he puts on his old favorite, Mr. Parker’s Cul-de-sac, an obvious homage to the beloved Mr. Rogers’ Neighborhood. Behrad and Nate are all ready to celebrate Ray’s good news, and are appropriately taken aback when he brings them up to date. Because she never learns about keeping secrets (must be that League of Assassins training), Sara decides that she and Ava will go deal with the returned Damien themselves. Doubling down on the secrets, Sara gets a call from Wild Dog that she avoids talking about. I think this might be the first reference to Team Arrow since that series ended.

Astounded and then outraged when her plan doesn’t work, Zari stares at the newest update from social media, and then brings Mick to Central City to confront the troublemaker. What is supposed to be an epic telling off gets utterly derailed by a series of surprises and a very out of character reaction from Mick. Nora shows Daddy Darhkest around Constantine’s house as the series of lies continues, while Sara and Ava get set to launch their plan, which ranks right up there with Ghostbusters’ “Get her.” Nora sees they are there (great work from the ninja) and pleads for a chance to handle things her way. there are a lot of negotiations, a few more plots, and still more lies, and a continuing great performance by McDonough as Damien. Sara dodges another call from Wild Dog as Gary pops up again and starts helping with the newest version of the plan for the night. Constantine gives a nod to a Legend from the past and stumbles on to the truth of what he was told earlier.

The situation at Constantine’s house gets more and more complicated as Ava pokes into Sara’s secrets, Sara makes a lousy waitress, and the warlock himself returns. I’m a bit surprised he went along with all this. I guess the Legends’ weird family vibe is rubbing off on Constantine. Nora proves to have some mad improvisational skills, and Damien is thrilled at what he thinks is Nora’s life. Meanwhile, there proves to be a problem with showing a smart kid a show that values honesty, as Pippa starts asking uncomfortable questions. The young girl pushes ahead with some questions, making things a bit awkward for Nora and Ray. In Central City, Mick gets filled in on some things he missed and then makes a fairly dramatic choice. Returning to the chaotic dinner, Nora is greeted by the odd scene of Damien and Constantine swapping stories. Never one to miss a chance to follow his own agenda, Constantine pumps Darhk for information about the Loom. Damien has nothing useful to tell him, and then the resurrected villain plays counselor as Sara and Ava air some of their recent grievances. It’s an interesting discussion.

While Gary tries to prepare a really special dessert, Ray shares his concerns with Nate and Behrad about what’s going on. Ray finally remembers something important he left behind, and shows up back at the dinner, which is just what Nora needs at this point. Ava finds what was lost, and it sparks a new round of misunderstandings. Constantine gamely tries to keep the façade going, but Nora has finally had enough and starts telling the truth. Daddy isn’t happy about what his little girl is up to, and seems to be sliding back to the bad old days. Behard and Nate have now taken over watching the kids’ show, when Charlie comes in, scolding them for missing the Encore alarm. Bored with tv, Pippa starts making wishes and brings herself and the rest of the team in on the action. Nate and Behrad encourage her to end the chaos via wish power, but she doesn’t do exactly what they were hoping for. Nate gets time for a facepalm before the changes kick in.

Sure enough, everyone ends up in a very warped version of Mr. Parker’s Cul-de-sac, which Pippa is thrilled to watch. There’s talking out problems, more puppets, and the Safe Space Sombrero, as well as the Train Abomination. Eventually, at least the major issues are resolved, and Pippa realizes her family isn’t so screwed up after all. There’s a big celebration and major event that brings everyone together. Mick even finally shows up near the end, getting more unwanted advice from Zari. Damien pulls Ray aside and lays out what he expects for the future for his little girl.

After the adapted sitcom idea of a plot, they pull some serious stuff near the end. Sara and Damien have a talk about past transgressions and Astra’s current plotting. They sort of patch things up, and then Damien takes dramatic action that shows he really has changed. It was an unexpected ending that’s going to potentially leave Sara with some uncomfortable explanations to make.

What I liked: They took a silly premise and did well with it. The little bits of side business were really entertaining. I’m a big fan of Mr. Rogers, and I liked the nod to him. Neal McDonough is immensely talented, and I’ve missed his over-the-top Damien Darhk. We didn’t get to see him, but it was nice to at least hear the concept of Wild Dog carried forward. It’s subtle, but I like that Sara’s personal stuff ties her to Star City, where she started off, and Mick’s links to Central. I think my favorite small bit was Nora brushing fairy dust off her shoulder after one of her teleportations. The ending was really well done and had a big impact, even more because it happened away from everyone.

What I didn’t: I know what’s coming for two of the characters after this, and I don’t like it. I’m not sure why Mick’s getting involved in something touching on a career he gave up, and I don’t like how he handled things, no matter how in character I could see it being. I wish they could have at least worked in a voice cameo for Rene/Wild Dog. I kinda missed Jonah Hex.

It was a good episode. It will be interesting to see the follow ups. I’ll give it a solid 3.5 out of 5.

This site uses Akismet to reduce spam. Learn how your comment data is processed.