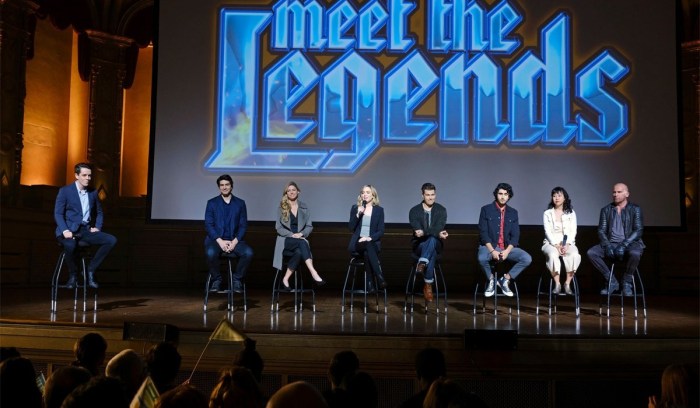 The Legends doing Q&A in public. What could go wrong?

Crisis has come and gone, and all the shows have changed a little (except maybe Black Lightning). The Legends deal with shifting timelines all the time, so you’d think they’d be used to it and have some kind of safeguards in place. But, when their history changed near the end of last season, no one seems to have noticed. Now, in the aftermath of both the Crisis and the season finale, there are some big new challenges for the Legends to deal with, some as a team, some individually. There are a lot of complications in “Meet the Legends,” a title I suspect borrows heavily from the album title “Meet the Beatles.”

The Legends are famous now, largely because of the events of Hey, World! that ended last season. There’s a montage of how their fame spreads, including magazine covers, tv spots. Rory presenting at the Oscars (who thought that was a good idea?), and Mona doing one of those naked fur ads in a pile of Beebos. Some of the people reacting to the events on tv are actual fans watching the show, who were contacted by the showrunners, which is kind of a nice meta-twist on things. Because of some unfortunate events in Congress, the Time Bureau has been closed, and Ava was arguing in hearings to keep the Legends going. This reminded me a bit of scenes in Iron Man 2, but also left a few questions. Why does the government think it has a claim on the Waverider, since that was something Rip stole from the Time Masters and left to the team, and why do they need money at all, since the ship seems to have Star Trek level replicators that make what they need? Hell, if they are having cash flow problems, they could either use their knowledge to make a killing on the stock market, or visit other worlds for wealth. The Waverider is both a space and time ship, after all, and I’m sure there’s gold, diamonds, and more valuable items on other planets and asteroids.

At any rate, in the interests of transparency, Ava makes the decision to invite a film crew aboard to do a reality show style documentary. Because what could possibly go wrong there? We see mini-interviews throughout the show, and Behrad (who replaced Zari in a major time ripple) going to visit himself the day he was born. Charlie takes the jump ship and runs off, missing for the rest of the episode (or the season? Who can tell at this point.), and we find out some of what Mona and Gary have been up to. Gary got a new position in part through a magic wish, which also doesn’t really play for me, but I get we’re not supposed to think too much about this show.

Ava springs a lot of surprises on Sara, Rory, and Ray, when they come back from their participation in Crisis and Oliver’s death. Ava makes a bad call that’s going to come back to haunt her, or several, arguably. Sara isn’t thrilled with the film crew running around her ship, and I don’t blame her. Rory shows he’s not exactly camera ready, and Ray babbles about the heroes they just worked with, and least he notices Charlie’s gone. There’s an in-joke about Superman from Ray, which was kind of funny.

Talking to the film crew, Ray mentions his image problems in the wake of being possessed by Neron, so they are paying attention to some of their past at least. Gideon is having major issues, apparently from trying to reconcile all the different changes in history from their own exploits and then the timeline being rewritten in Crisis. After a passing mention of where Nora is, the team responds to a blip in history from 1917 Russia. I get that it’s a light-hearted show with a lot of odd little bits, but bringing a film crew to the past and letting them be seen was just plain stupid, both in the writing and the Legends doing it. The disturbance centers on the legendary Rasputin, who sounds like some kind of anomaly even in real world history.

Sara decides a timeline problem is something she can handle, and leaps into the case with some relief. Ava, concerned, asks Ray if she’s ok, and he relays what he’s seen. I know Sara and Oliver were very close, but I would have liked more of a reaction from Ray as well. Ray knew Oliver better than the other Legends, but seems curiously unaffected by his passing. Various ideas get batted around, including a card for Sara and bad guys returning from the dead, which Mona ends up naming Encores (that foreshadows a plot point later on).

Constantine and Gary are off dealing with problems more suited for the warlock than the other travelers, and things don’t go at all to plan. The Waverider goes to the past, having a bad effect on some wildlife and annoying Sara when Gideon initiated the jump with the film crew still aboard. Sara and Behrad talk about fame, Oliver’s death, and how awkward greeting cards can be, heading off Ava’s delivery of one when she overhears this. Behrad gives Sara a present, actually fan art from Lord Mesa, a cartoony artist who has gotten acclaim for his CW-inspired work. Ava reads her card to the film crew, and it’s really just as well she didn’t get to give it to Sara. Things degenerate into even more chaos than usual as the team splits up to try multiple different, and conflicting, approaches to the problem. Ray has embraced the spirit of the documentary by adding a cam to his helmet and trying out various catchphrases.

Nate ends up doing a cheesy interview with Rasputin, getting kind of Dr. Phil with the mad monk. Ava favors a more direct approach, and Mona is trying something more suited to her talents. Ray stops Ava, Mona gets some critique from Rory, and Rasputin makes some very astute observations about Nate. Constantine figures out some of what’s going on, while Sara gives the camera more reality than they’re likely comfortable with. After doing some work, Behrad comes up with a good theory about what’s going on with Gideon. What we know that they don’t is that a lot of Gideon’s mis-statements are centered around Zari and her absence.

Nate gets some interesting therapy from Rasputin with unexpected results, while the others keep tripping over each other. Rasputin himself proves to be invulnerable to several different attacks directed against him, showing us the issues the Legends will be having with the Encores throughout the season. Back on the ship, Sara has a meltdown over how everyone’s been acting and her own grief, and learns some of the reasons why some things are happening. No one is really coming out of this looking that great. Behrad keeps working on the Gideon issue, while Sara gets yet another reason to be irritated on learning the team left the film crew behind in Russia. Again, it was funny, but really out of character for Ray and Nate at the very least. Irritated beyond measure, Sara goes to handle things herself. She’s not likely to do worse than they have so far.

After Rasputin gets some helpful evil laugh critique, he makes his plans to make some changes. Major fights erupt as things go even more off the rails, Rasputin showing some talents no one knew about before. Ava and Sara share a comedic apology/fight scene. In a surprising development, Nate remembers he has powers and uses them in the fight. The bad guy defeat hinges on one of the team doing something they never have before, and then acting out a fan theory from Avengers: Endgame that was shot down as soon as it came out. There’s a very entertaining end bit with Sara and Ava that was later revealed to be improvised, and made the cut to stay on the show.

Kevin the director provides some cheesy voiceover as the crew cleans up various things after the mission. He’s very excited about some things that make Sara look very uneasy. While the others are busy, Nate gets creative and pieces together something about the missing and forgotten Zari. We skip ahead to the premier of the big documentary, and all the crew are there on stage for some Q&A afterward. There are a lot of in-jokes and suddenly the big transparency issue that was so important before gets blown off as the team does everything they can to discredit the film, which is kind of a crappy thing to do to Kevin, if nothing else.

After all that gets dealt with, we see Mick is helping finance the team through theft (again, why do they need the money and how is stealing better than the stock market thing?), a legacy gets passed on causing someone to leave the ship, and Constantine comes and goes to look into something. Ava gets another meta-moment when she comments that some of the things that happen on the Waverider really would be difficult for an audience to follow. The final scene is Nate making an important discovery and losing the evidence to prove it just as he gets it.

What I liked: Rasputin was an interesting choice, since he sounds like he’s nearly superhuman anyway. I liked Constantine’s scenes, and the naming of the Encores was fun. Mick and Mona had a few great scenes together, and I liked the Ava/Sara fight/apology they shared. I’m glad Nate finally used his powers, and am interested in his new quest. They did a good job of making Behrad his own character, not just a “male Zari.”

What I didn’t: I get it’s an absurd show in a lot of ways, but this one seemed like they pushed things a bit too far. The camera crew in the past was bad on several levels, the team turning on Kevin was just mean. The whole reason they agreed to the film crew doesn’t matter anymore? Why does the government think they can claim the Waverider? Why is money an issue?

This one almost felt like they were trying too hard. It didn’t quite click for me the say some of the other episodes have. I’ll give it a low 3 out of 5.