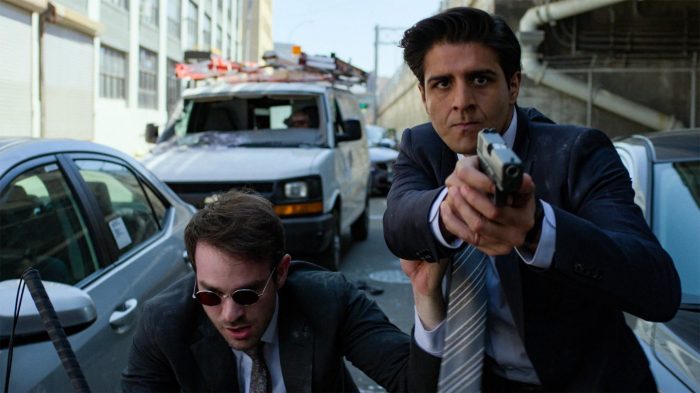 I TOLD you we shouldn’t have taken the parkway!!!

The end is almost here for Matt, Karen, Foggy and the rest, as Daredevil’s final season ticks down. The Kingpin seems supremely ascendant, and everyone is turning on Nelson, Murdock, and company. It looks like they’re going to need a miracle to pull this off, and those are in short supply. Even though there’s another episode to go, this one is titled, “One Last Shot.”

Fisk goes to meet a very important helicopter arrival, and gets some bad news. While he deals with that, Foggy and Matt help get some refugees to an unexpected place of safety. Fisk has made more enemies besides masked heroes and crusading lawyers. Ray and Seema have a heart to heart, and she makes some good, if hard to hear, points. To his credit, Ray knows he’s made mistakes. It’s a harsh conversation. Matt, Foggy, and Ray get together and Foggy shares his plan, which speaks well of him but shows a certain naivete.

Fisk brings Vanessa home with heavy police escort, and somehow the protestors are all magically gone. Fisk extols the virtue of their new home, and Vanessa gives a very interestingly phrased response. Some of his aides try and tell him something, and we see that Fisk temper peeking out. The reunion is clearly not all Fisk hoped for, and I can’t imagine that’s going to be good for anyone, long-term.

The others regroup at the gym, and have to sort out where they all stand, since recently Ray was hunting most of them. They debate idea to get Nadeem’s family safe, and Karen shows she’s been doing some planning. Matt and Foggy make a generous offer, and Karen, after a series of “Be carefuls” with Matt, goes to get the next phase started. She and Matt both offer Ray some good advice before she leaves. The next morning shows their next step, as Detective Mahoney uses some unorthodox means to set up a meeting between Foggy and DA Tower. Foggy has a new spin on the old “offer he can’t refuse,” and Tower is interested in spite of himself, especially after Foggy makes a confession about Fisk’s attempt to gain influence over him.

Getting ready for their important meeting, Ray talks to Matt about how he got into this mess. It might not be a unique motivation, but it’s very believable. It makes him a much more sympathetic character than he has been for a lot of the season. Matt listens to Ray’s laments, and suggests he use those emotions to make his point. DA Tower comes in, skeptical at first, but increasingly interested in what the FBI Agent has to say. Dex tries to score some points with his new boss, but things don’t go how he expected. They make great use of sound effects to show the toll this is taking on Dex’s fractured psyche.

Ray is honest about what he’s done, and Tower is impressed and having a hard time believing all this. Foggy urges him to accept the truth. There’s an argument with Tower on one side, and Matt and Foggy on the other, that ends with Ray stepping up and taking responsibility for what he’s done. Ray tries to soften the coming blow for his son, which Matt hears all of, whether he wants to or not. Those enhanced senses are a mixed blessing. Foggy is feeling a lot more optimistic and self-congratulatory than Matt is, and they discuss their future. I do think Foggy is getting ahead of himself.

Fisk and Vanessa have a domestic scene that is actually touching, to start. Fisk pushes Vanessa to tell him what’s bothering her, and she does. Her heartfelt outpouring gets interrupted when Felix shows up with more news Fisk doesn’t want to hear. Felix has put a lot of information together and is apparently something of a master detective himself. Felix and Fisk collaborate over what to do, and Fisk emphasizes that business is not to be discussed in front of Vanessa.

Karen meets up with Ellison, since he’s a creature of habit, and presents a new idea to him. He’s initially still annoyed she’s not telling him what he wants to know about Daredevil, but goes along with her other idea, since it serves the greater good and he actually has a conscience. Vanessa meets Dex, who is overseeing the installation of the missing painting. It’s a great scene for building tension without talking about it, and a subtle part of the image conveying so much about what happened. Dex is clearly staring to lose it. Matt has taken some great precautions to get Ray to the courthouse, and the FBI man is impressed, if initially annoyed. On the trip, Ray asks Matt about reconciling his two lives as attorney and vigilante, and talks about how many problems he’s had over just the last few weeks. Their talk about who sticks by you gets interrupted when the once again omniscient Fisk sends a hit team after them. We get a good action scene, some great teamwork, and a few decent one-liners as they fight their way across town.

Foggy and Karen are starting to worry when Matt and Ray finally make it, not looking quite as clean and professional as when they left. Ray testifies in great detail, about what he’s done, what Fisk is up to, and Faux-Devil among other things. Things are going really well until one of the parts of this episode that just really doesn’t work for me at all. Matt’s senses warn him that the jury has been corrupted. For that to work, Fisk had to have control over something that had nothing to do with him, since Tower already said this jury was in session earlier on other matters. I get Fisk has a long reach and influence, but this is just a bit too much in my book. Matt and Foggy argue, Matt says he should have handled things his own way, and Ray does something desperate. Foggy’s having a very bad day.

Fisk is a bit surprised at Dex’s addition to his décor, and more so as Vanessa relays their conversation. Vanessa gets to the heart of what’s bothering her about their reunion, and leaves Fisk with a decision to make. I admit, I was a bit surprised here myself. Ray makes his way home, makes a few preparations, and leaves some messages. He’s clearly come to a decision about what’s coming. Fisk lets Vanessa in on his secrets, and she shows they are very well matched for each other.

The episode ends on two scenes. Ray gets a visitor he was expecting, and does his best to talk to this person, obviously not really expecting to succeed. Thing go the way they pretty much had to, and it’s a sad thing to see, but inevitable. Matt has had enough, and storms off, leaving Karen and Foggy exchanging worried looks in his wake. There’s a lot in play for the final episode.

What I liked: As always, the action is great. Matt and Ray had some great scenes together, especially in the van and just after. Foggy is a resolute man, if maybe a bit unrealistic in his expectations. He did make a big sacrifice here, and it was impressive. Karen is courageous as well, and Ellison was willing to do his bit for the greater good, as was Ray. Vanessa has some hidden depths, and Dex is sliding off into the deep end.

What I didn’t: There are a few times here we go from Fisk is well informed to Fisk has his own superpowers. I get he’s well-connected, but even that has limits. I was more or less expecting the ending, but was sad to see it.

It was a good episode, as they all have been for this series. I’ll give this a high 3.5 out 5. I’m not sure how the heroes are getting out of this, but it’s going to be interesting to see it play out.