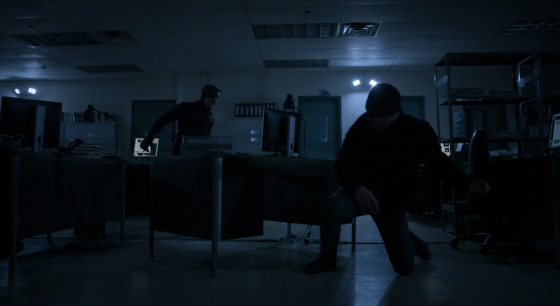 You thought it got rough at YOUR office…

There’s not a lot to like about Wilson Fisk, but you’d have to be extremely foolish to call him stupid. Fisk is a long-term planner who is utterly ruthless and fairly brilliant. The results of some of his schemes start turning up in “The Devil You Know,” a very ironic title on several levels. There are some great twists in this one, and I’ll do my best to avoid spoilers, but it’s a bit tricky.

Karen wakes up after what was apparently a very rough night, and has some flashbacks to her hiring Foggy and her confessions to him. I feel bad for both of them in this scene. Snapping out of her reverie, Karen hears a noise in her apartment. It says a lot that her first words after seeing Matt let himself in the window are very plain, pragmatic ones. Matt tells her about what’s going on, and his current circumstances, and they don’t exactly have a warm reunion. Karen figures out it’s not just a social call, Matt explains what he’s working on, and she agrees to help, mostly out of their mutual enmity of Fisk.

Dex has his own rough night, reliving the disastrous dinner with Julie, and tries to find solace in his therapist’s recordings. He definitely doesn’t look ready for work when the alarm goes off. At work, some of Fisk’s conditions have been met, and his holding area starts looking like the luxury suite that it is. If anyone really wanted to stir up trouble, all they’d have to do is get pictures of this and leak it to the media. The outrage would be enormous, and deserved. Karen goes to work and tunes out Ellison’s warnings about the new healthcare package to start doing research for Matt. Later, she and Foggy discuss Matt in general, friendship, and Matt’s current living situation. They come up with a plan to clear up a lot of the current issues, and hopefully prevent the FBI from figuring out Matt is Daredevil. Of course, with the footage out there from the “Blindsided” episode, I don’t know how that secret isn’t public news already.

It’s not a good sign when you show up for work two hours early and looking like hell, but that’s what Dex does, trading jobs with another agent to bring Fisk his meal. Dex rages at Fisk, telling the crime boss he doesn’t know anything about him, and doing a few things to make it good that he turned off the cameras first, although how he’s covering that, I don’t know. Fisk in turn tells Dex a story, confessing to what was likely his first felony, and talks about what society finds acceptable. They argue over what happened with Julie, which Dex is sure Fisk arranged. Fisk never denies it, but I’m sure he’s not above taking credit for something he didn’t do, either. Dex goes back out to the command center, and gets more bad news. What’s happening to him isn’t good, but the way he finds out here is particularly terrible, and, speaking from experience, believable.

Karen goes looking for Matt, and finds Sister Maggie instead. They have a long talk about Matt, his early life, Daredevil, and Matt’s tragic life. I think it’s a good conversation that might help both of them, but Karen a bit more. Dex gets the official bad news and a lot of lip service, and then goes to find Ray. Ray is sympathetic, but can’t help, and Dex’s hallucinations or flashbacks or whatever you want to call them are getting worse.

Karen runs down a lead passed on by Matt, and goes to a really shady building. She goes through the motions of what she needs to do in order to get inside, and goes hunting for her target. She finds him, chaos ensues, and Matt shows up out of nowhere to show his fighting form is getting a lot better. They confront the man they need, Karen shows her own ruthlessness which surprises Matt, and they make the best deal they can after hearing something surprising. Foggy has a meeting with Ray, sets up an interview for Matt, but makes another claim that leaves Ray curious and disbelieving. Ray goes to his boss, gets unexpected good news, but puts that aside to share what he’s learned. Both of them engage in some willful blindness, although Ray is doing some follow-up in spite of himself.

Matt gets ready for his big night, and has a conversation with Maggie. She doesn’t get all that’s going on, but can tell Matt’s in a better mood, and there’s even something approaching banter between them. Maggie is delighted to see Matt in a better frame of mind. She also points out a few things that don’t really make sense between Matt’s actions tonight and his earlier claims.

Dex has a moment of crisis in his apartment, hallucinations urging him to a drastic act. Just as he’s about to follow through (the timing is dramatic, if unlikely), he gets a call, and Fisk does more storytelling, followed by an offer. Dex gets a visitor immediately after, following up on Fisk’s offer. Matt and Foggy wait for their interview, and Matt gives Foggy a present. They share a joke, and Foggy vouches for Ray, which is good enough for Matt. Karen brings a man with an interesting story to Ellison, who is reluctantly drawn into the tale.

Things kick into high gear at this point, and I’m going to have to go really light on detail so as not to give away some important plot points for this episode. Ray and his team get a tip that Matt Murdock is at the Bulletin, and they scramble a response team, which seems like a violation of the arrangement with Foggy. It’s also an odd choice to explain. Either Matt’s a blind lawyer, in which case the heavily armed team is an overreaction, or they know he’s Daredevil, in which case they didn’t bring anywhere near enough people. I presume the tip came from someone on Fisk’s payroll to cause as many problems as possible, although again, how Fisk knew this is unclear.

Karen and Ellison set up to take down the story from their witness, and then the power goes. What follows is a really impressive comic book style fight, with Matt going toe to toe with a very skilled foe. The fight choreographers manage to very show each one’s strengths compared to the other very clearly. There are some interesting levels to the costuming, but there’s one bit that doesn’t really play, either. Matt is making arrangements to tun himself in to the FBI. He brings his costume for this? The fight is really spectacular, and the bad guy succeeds on all fronts, although not as easily as he likely thought. There’s an insane amount of collateral damage, and this is going to be a nightmare to clean up and process for the evidence techs later.

The FBI arrives in the midst of the event, and is surprised when they get to the building and see people fleeing. Ray leads a team upstairs, and they have a run-in with the bad guy on the way out. They don’t do any better than Matt did, but it’s enough that it’s going to cause all sorts of complications down the road. Ray makes it upstairs finally and is shocked at the carnage. He finds the survivors and they have a wordless exchange before Ray announces the name of the person who did this. Matt plays hide and seek in the printing room, and the outcome isn’t really clear as the episode draws to a close. Next episode, “Aftermath,” seems like it’s well named.

What I liked: That final fight was amazing. The action was fantastic, the skills shown were great, and they both got surprised by the opponent’s skill level. Foggy’s loyalty to Matt was very in character and believable, as was Karen’s anger. I liked both of Maggie’s scenes, with Matt and Karen. I don’t like what Ray’s doing, but I get it. Fisk is really slick, you have to give him that. The way Dex got the bad news was terrible, but I bought it. They do a good job of making you feel bad for Dex.

What I didn’t: As stated above, Matt having his costume with him made no sense. I have some questions about some of the handling of the scene of that fight, but I’ll wait for next time to find them out I guess. I really hope they didn’t kill off one of the ones it looks like they did. Fisk’s timing and knowledge are bordering on supernatural, even with all the influence he somehow still has. I’m really not sure the FBI would sign off on the redesign of Fisk’s living space.

Overall, a great episode. That fight really wowed me, even down to the costuming. I’ll give this one a 4 out of 5. I’d go higher were it not for some of the things I mention above. On to “Aftermath”!