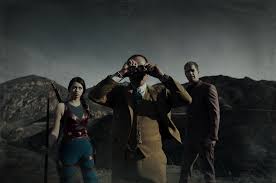 Time is a big part of Legion’s third and final season. Time’s also running out, as Chapter 23 is the halfway point. The show remains as oddly surreal as ever, and the David vs Division Three war gets more complicated. Now, there are time demons running around, and they don’t seem to be on either side. Nobody has a very good time of things, and the glitches in the flow of time make things even weirder than normal.

On the Division Three airship, Ptonomy gets a trim as Kerry mopes. She’s bored, missing her brother, and tired of everyone acting like grownups. The lights flicker, which is disturbing when you’re way up in the air, and then time itself flickers, which disturbs everyone. Ptonomy can’t handle it, and starts having a lot of system errors. Kerry tries to figure out what’s going on, and finds herself skipping to other scenes without remembering the time in between. She’s suddenly talking to Syd, and they’re both fairly sure David’s behind this latest problem. They get an object lesson in messing with time and they go to try and see what’s going on.

Lenny and her very pregnant girlfriend lounge on the lawn of the cult’s house, watching the others play hopscotch, and debating names. Lenny has just come up with a truly memorable one when one of Switch’s portals opens above them, and Switch and David come tumbling out. David demands they go back and try again, and then this scene repeats several times. Switch is at least attuned enough to time to know something’s wrong. The Division Three team is investigating as best they can, and run through a few time loops themselves. They have a close encounter with something ugly and weird, and Farouk saves the day. I really can’t get used to that. Syd comments (several times because of the repetition) that this must be how David destroys the world.

David is meditating in his cave/chamber, and seeing images of his mother from his trip to her time. Lenny comes in and says they’re ready for him, and is really not reassured by how he answers some of her questions. David addresses his cult in a weird, creepy way, and it’s enough to make your skin crawl. After talking to them in general, he focuses on Switch, trying to find out what’s happening. He’s understandably displeased to only now be hearing about the time demons. I’d think that’s important information. She describes them as best she can, and the cult gets nervous. Maybe this would have been a good discussion for a smaller audience? At any rate, they worry to the point he uses his power to calm them. To no great surprise, Lenny is the one that is most resistant and disruptive. Lenny actually tries to get him riled up to turn that anger against their enemies. David announces this is his time, and he’ll kill whatever the universe throws at him. He gets cocky and the demons come calling. David’s resistance doesn’t go as planned, and he ends up getting sent elsewhen.

For absolutely no reason, the next thing we see is an interrogation scene from the Fox show The Shield, which has some time loop issues. That show has nothing to do with this one, and I have no idea why they included that. Farouk shares what he knows about the “time eaters” with Division Three, and answers Clark’s questions about fighting them as best he can. They debate what to do, and then, with another time skip, Farouk, Clark, and Kerry vanish. Syd walks back to her room and finds she has a very unexpected visitor. They have a very odd introduction and conversation.

The time demons/eaters/blue cats get to Cary’s lab, and give an interesting demonstration of their power. After screwing with him for a while, they erase the time when he was indoctrinated by David. Realizing he’s been used, Cary leaves the lab, dodging cultists and time demons alike. He ends up meeting Switch, and they make a run for it, leaving via the strange route she first arrived. David has a conversation with his new neighbor that sounds like he’s gone totally mad to her. His powers aren’t working right, so he can’t show he’s not just some random crazy guy. The demons take him elsewhere, and he tries to fight them, but keeps getting sent back a few seconds as they giggle. These might be the most annoying things to turn up on this show yet. Clark, Kerry, and Farouk end up in a blasted wasteland, and talk by words appearing around them. They move in stop motion to set up a camp and plot how to take the fight to the demons.

Switch and Cary make it out, and he places an emergency phone call. He doesn’t get the answers he’s looking for from Ptonomy, and there are several more time glitches, ending up with Cary back on the ship somehow. Switch is worried about what the demons will do, and Ptonomy is going to take far too long to make up his mind. Syd has a long and wandering chat with her visitor about first times, falling in love, and men who can’t be trusted among other things. Their visit ends with more demon attacks.

Lenny goes looking for her friend, and ends up in a hyper-accelerated time loop, seeing the birth and entire life of her child. At least, it’s notionally her child, but the journey ahead at warp speed through time is real. That ends with her screaming, alone. The Division Three team fights the demons on their own turf, and pull off something of a victory. Syd has her own weird trip, and then it’s David’s turn. He makes some troubling declarations, turns on the demons, and manages to destroy one of them. He issues threats to the other and lets it go to carry the word. He gets home and reunites with the shaken Lenny, who turns down his offer of help. David goes inside, scares his cult, finds out something he didn’t want to hear, and decides it’s now war with Division Three. As opposed to them trying to assassinate him in the first episode this season?

What I liked: Time travel stories can get a bit mind-bending. Doing them on a show that prides itself on being bizarre and trippy is quite a ride. The Clark/Farouk/Kerry team was fun to watch. David takes a while to get going, but he’s really dangerous when he does, and the imagery is interesting.

What I didn’t: I have no idea why they included The Shield, a show that has nothing to do with this, or superpowers, or anything Marvel. At times, they seem to be trying to be weird just for the sake of being weird. I’m really ready for Farouk to go away. I don’t get what’s going on with Lenny, and I’m not sure how much I care anymore.