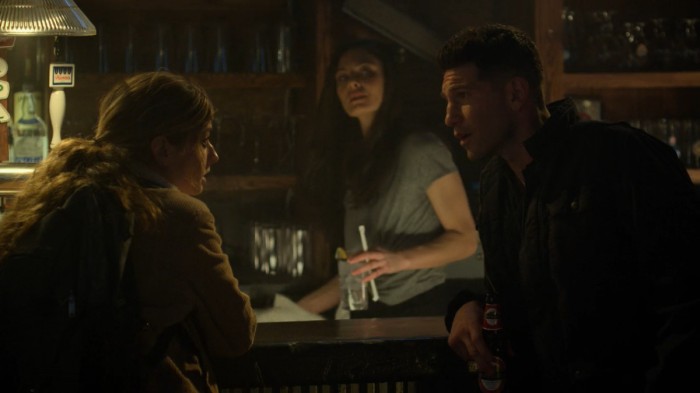 A vigilante and a thief walk into a bar…

Jon Bernthal’s portrayal of the Punisher on Netflix has really impressed me. He wasn’t originally supposed to have his own series, but the fans reacted so strongly to his work that Punisher was added to the lineup. Also, since he’s not part of the originally contracted four, there’s the potential, albeit unlikely, for some wiggle room on this version of Frank Castle turning up elsewhere after Marvel and Netflix finish cutting ties. Whether or not we ever get to see him again, Frank Castle is back for a second season on Netflix, starting with “Roadhouse Blues.”

The show opens with a car chase and gunfight. That’s not necessarily out of the ordinary for Frank Castle, but he’s also with someone we don’t know, and definitely not in New York City. While I admit I’m tired of this particular narrative device, a good bit of the rest of the episode works us back to that point, and they do it well with a good story, and a rare celebrity guest star.

The story starts with Frank in a bar, listening to Shooter Jennings on stage. He has a one beer at a time rule set up with the bartender, declining to run a tab, which sounds like Frank. Always ready to duck out if need be, and no trail from credit cards. A skittish young woman (the one from the first scene) wanders in, insults Frank, and drifts to another part of the roadhouse. Frank and the bartender, an attractive woman, are amused by the kid. You just know Frank’s night of music appreciation isn’t going to last, but then, there’s a reason so many role playing games start with the characters in a tavern/bar/pub, and I guess a roadhouse fits, too. It’s a cliché, but a good one: idiot patron insults and then assaults attractive bartender, Frank steps in, idiot shifts attentions to Frank, idiot has a bad night. Frank almost runs afoul of Ringo the bouncer, but the bartender, who introduces herself as Beth, intervenes. Frank calls himself Pete, and they get a bit friendlier. The nervous girl (who never does get a name this episode) goes to the payphone at the back of the place.

Elsewhere, a man in a tanktop is having a very bad night. He’s tied to a chair, looking much the worse for wear, and the man with him is very calm, even slightly amused. The tied up man’s phone rings, and his captor cautions him to be smart. Of course, this is Nervous Girl, who is setting up some kind of shady exchange. We get the rough outlines of what’s being exchanged, and learn we’re in Michigan (Frank really is far from home). Nervous Girl sets up her terms and hangs up. The captor shows us what kind of man he is as he deals with the prisoner, leaving a telltale mark behind. Beth and Frank chat more, and take slow, awkward steps toward getting to know each other better. Frank does get a great line about passing through in the conversation. When you consider Frank’s background, this is a huge step for him, and shows how far he’s come since his earlier appearances. I like the character growth.

Nervous Girl goes the motel Frank is staying at, checks around, and picks the lock of an empty room. What motel these days has actual key locks instead of those magnetic cards I’m not sure, but between this and the payphone, I have the feeling Wherever-We-Are, Michigan isn’t exactly at the edge of the tech curve. In a scene with a lot of cutting back and forth, Frank and Beth sleep together and get to know each other, sharing some of their backgrounds with each other. Beth has a kid, who is at his grandmother’s for the night, and Frank shares his real name and a very edited version of his past. Like Samuel L. Jackson on broadcast tv edited. They joke about names they don’t like, and Frank gets flashbacks both to the fateful day at the merry-go-round and his final fight with former friend Billy Russo.

The stereotypical morning after scene gets knocked off course when Frank, slipping out the house, notices Beth’s son Rex is back unexpectedly. They chat, and Beth comes out, confused to hear his voice. After Rex complains about being hungry, and Beth admits she didn’t get to the market yet, Frank takes them out for breakfast. I do wonder where he’s getting his money. Rex asks a lot of awkward questions, Beth and Frank are suitably embarrassed, and they have a better parting. As Beth starts to drive off, she tells Frank that band he liked so much is playing again tonight. They set up for a coincidence that would have been one too many, but then show things aren’t quite as they seem as Frank gets back to his room and Nervous Girl has a run-in with someone else. She and Frank cross paths again, briefly, and she walks off, leaving a bemused Frank behind her. That night, the roadhouse is full again, Shooter is on stage, Beth’s at the bar, and Nervous Girl is prowling around. Frank has a change of heart and goes back.

By this point, it’s clear something bad is coming, and Nervous Girl will be part of it. Frank and Beth have an entertaining reunion, but then Frank picks up on something off about some of the people coming in. Ringo the bouncer might have noticed, too, if he wasn’t chowing down. The man does eat a lot. Nervous Girl gets cornered in the bathroom, and Frank figures out something’s up. A really ugly, brutal fight ensues in the bathroom, and Frank proves to be an equal opportunity puncher. He and Nervous Girl have some words, and end up out in the main room again. The skilled thugs Frank dealt with weren’t alone, and things get kicked up a notch. I will say Ringo gave a better accounting of himself than I expected. It’s a big mess, and there’s a casualty that sends Frank scrambling for the nearest Emergency Room, which loops us back around to where we started.

Frank deals with his pursuers in his usual efficient manner, and both impresses and scares Nervous Girl. They get to the hospital, get the patient cared for, and ignore the feeble “Hey, don’t leave,” directions they are given. The man we saw as captor before gets to the roadhouse, investigating the carnage. The place has improbably good security systems, with audio and video. The captor makes several observations showing that he’s not just some thug, and is in an impressive position with regards to the other person on scene.

The final two scenes set up for more of what’s to come. Back in New York, Dinah Madani has a one-sided conversation with Billy Russo, and she’s looked better. I’d say the events of season one are still weighing on her. She leaves, demonstrating the security on his room. In Michigan, Nervous Girl asks if there will be more of them, and Frank gives a chilling reply.

What I liked: Frank has grown and changed since we first met him, and it’s nice to see the improvement. I enjoyed his scenes with Beth. They had some good chemistry, and Rex was good, too. The fight scenes were up to the usual excellent standards of Marvel/Netflix, and Frank knows how to give, and take, a beating. The bad guy, whoever he is, is impressive so far. I liked the scene with Dinah and Russo.

What I didn’t: I mentioned the technological anachronisms with the phone and locks. There’s a lot of coincidence going on here, but it’s needed for the story and works, I guess. As I said, I wonder where Frank’s getting his money.