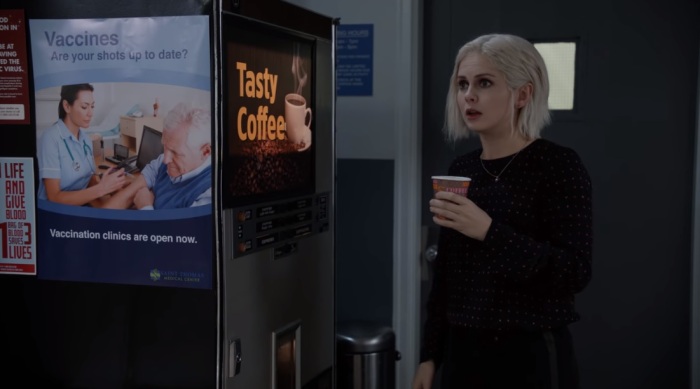 This might be Liv’s funniest brain induced outburst ever.

The final season of iZombie passes the halfway point as tensions rise and, as always, there’s another murder to solve. Various subplots move along as other factions make moves and complicate the already unstable balance of power in New Seattle. After being fairly mellow for a few episodes, Liv’s new brain quirks are front and center and highly annoying for everyone around her. What kind of brain? Well, the tile is a clue: “Fileted To Rest.”

The show opens with Ravi and Liv coming to the crime scene, so our victim doesn’t even get a death scene. This week’s turns out to be a highly skilled chef, with the body left a bit abnormally. Ravi also discusses his lack of success in the search for underground criminal chemist Beanpole Bob. The owner is an odd man who is very forthrightly honest about what he’s concerned with and some unusual fantasies. He also has a request for Liv that Ravi echoes.

As Liv does a gourmet brain preparation, Ravi gets some bad news from the CDC. Charlie, his partner in research at the CDC, tries to cheer him up, then shares some personal news and asks a favor. Ravi and Clive go over the evidence of murder and determine a somewhat unusual weapon. Liv starts shifting to her new brain, which no one is happy about. A Filmore-Graves facility gets hit by a well-armed raid, and the soldiers are not reacting at a professional level, even with the disadvantages they have.

Major meets with a minor character we haven’t seen in a while, setting up what I expect will be an important subplot in the near future. Back at the facility, which is the Filmore-Graves lockup, one soldier survives the chaos and runs as superior firepower comes his way. I don’t blame him. Major is later walked through the scene, and we learn some data about what happened, that the missing solider we saw is Peters, and that long-time supporting character Justin was injured in the chaos.

Clive is settling in to his new (likely temporary) management role, getting some teasing from his co-workers. Clive gets a much bigger surprise at a newly assigned detective (who wasn’t a detective before), and a weird situation gets discussed. Clive does swap around some assignments. Liv makes another appearance under the influence of the brain of the week, and mocks the office coffee, intimidates a cop, and “helps” with some interviews. We learn about an additional possible motive for the murder and an odd quirk from a suspect.

Ravi goes to the morgue and gets some surprise visitors. After some oddness is dealt with, there’s a video chat, some family news, and a tough situation. The next suspect gets caught in a lie but also provides a clue. It’s enough for Liv to deduce what the murder weapon was, although it’s apparently been disposed of in a unique way. Liv and Clive go to another restaurant, where Liv’s brain runs amok. Clive gets a call and has to go deal with some disturbing boss issues, and gets some great compliments for his response.

Liv gets a double surprise when she curses out a coffee machine and gets scolded… by her mother, who we haven’t seen for many seasons. I’ve been wondering about that, and we get filled in on Liv’s attempt to contact her mother. It’s a very emotional scene, and Liv hears something about her father, who has been a mystery up until now. Mom leaves on an unpleasant note.

The various kids are running wild at the Renegade safehouse, and Liv’s current brain doesn’t handle this well. After some more interviews and a vision, Liv makes some progress on the case. Major goes over his files and tries to puzzle out what happened at the lockup. Justin gives him some answers, and they debate Peters’ possible involvement in the planning of the attack. Nothing quite seems to be adding up for Major.

The other strange faction we’ve been seeing watches the news, and their mysterious leader praises Dolly Durkins for her clarity of vision, although they are on opposite sides. As the leader and undercover teacher Riley debate some next moves, they finish thawing the ever-annoying Enzo. Major gets home, getting an update from Liv about her father situation. Major gets a further surprise when he finds out he has a visitor with some serous accusations. Major does at least listen to news he doesn’t want to hear from a source he doesn’t entirely trust.

Charlie and her sister finally get their talk and bond over family troubles and “The Notebook.” It’s an entertaining scene that Ravi is mute during for some odd reason. Clive relates some truly comical news about an arrest in the case. They do seem to specialize in off-camera slapstick on this series. The interview spins in an unexpected direction as the suspect is not exactly innocent, but not who they are looking for at the moment. Major starts up a sting operation while Liv goes out to eat, doesn’t get what she wants, but does manage to break the case.

Finally, Clive and Liv get an interview with the right suspect and hear what happened. Once again, there’s a conflict between the law and justice, since the zombie situation is so complicated here. Major’s operation gets results he expected, but didn’t want. Things go badly for a moment, but Major saves the day with a stunt Malcolm Reynolds would have been proud of.

Liv does a closing voiceover over scenes of the arrest, musing about family. She gets back to the safehouse, puts the brains to good use, and gets a special treat together for the kids and Major. Enzo talks to the mysterious boss about what happened at Filmore-Graves. The final scene is an unexpected reveal that’s going to send several plots into conflict.

What I liked: Major is easy to underestimate. People often mistake kindness for weakness. Major is kind, but far from weak, and he shows that in this episode. Clive’s scene at the hospital was really sweet. The banter was entertaining, as always. I have to give points for a creative weapon and disposal of same.

What I didn’t: Most of the time, there’s a mix of Liv’s talents and Clive’s skill to solve the case. That didn’t happen this week, and made Clive a lot less important to the main story. I didn’t really like Olivia’s mom coming back just to be both a bitch and plot device. I’m not sure how I feel about the sense at Fillmore-Graves, or the one at the end.

I’ll give this one a solid 3 out of 5. It wasn’t their best, but had some good moments.