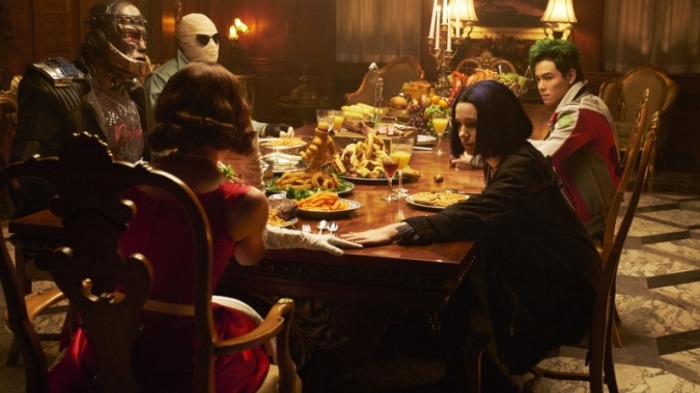 Episode four of the Titans is “Doom Patrol” and that pretty much says it all. It’s an odd choice to detour to an entirely different group so early in the first season of a new show. I get the concept of “back door pilots,” that’s how we got Flash out of Arrow over on the CW, but going to a different team when the Titans aren’t even really a team yet seems like a weird way to go. They also have the Chief being played by a completely different actor than the one who they’re advertising for the forthcoming series, so… there’s a lot of interesting choices in this episode.

Two years ago in the Congo, we get a variation of Gar/Beast Boy’s origin from the comics. In the comics, Gar gets a rare illness and his father treats him with an untested vaccine, which eventually gives him his green appearance and powers. Here, the Chief, leader of the Doom Patrol, does something similar. This Gar is both less green (only his hair) and less powerful (his shifts are very painful and thus far are just one animal) than the comic book version. His race has been shifted, too, but that seems to be more and more common.

Picking up right where the previous episode left off, Rachel flees across the lawn of the convent she just partially destroyed. Once she gets into the woods, there are no lions or bears, but there’s a big green tiger, which, of course, proves to be Gar. The young shifter also lacks the comic book’s ability to deal with his clothes while changing shape, making for some hurried scrambling to get dressed after each use of his powers. He leads Rachel away from the convent, and she just sort of goes with it.

At what’s left of the convent, Dick and Kory show up. Dick badges his way into the scene and they speculate about what happened. They find Sister Helen, the nun they dealt with the most last time, who isn’t making a lot of sense or being a lot of help as far as the pair are concerned. Dick and Kory argue about leaving Rachel alone and try and figure out what to do next.

Garfield and Rachel have stopped in a conveniently empty barn to rest up (seems to be the theme of my viewing this week, taking after Black Lighting) and light a fire, although neither has been acting cold. Gar tells her that he’s taking her “someplace she can chill,” and she says she can’t do that. They both acknowledge neither of them is “normal” and then hear a gunshot close by. They find the stereotypical drunk hunters with a side order of bully, who are both lousy shots and must have failed whatever gun safety courses came with the hunting license. Rachel won’t let them get to the deer they shot but didn’t kill, and then Gar goes furry and runs them off, one falling over and drunkenly shooting the other. These two are real prizes. Rachel tries to comfort the deer, but it dies. Gar confesses he’s never actually bitten anyone and the thought grosses him out, and they disagree about whether or not Rachel is evil.

Gar leads them to a huge mansion, and slips in a cellar door, revealing an amazingly stocked game room, and that the boy is into classic movies and games. They share tragic family histories, and are both evasive about their current circumstances. Then he has her hide as someone comes in, and we are introduced to Cliff Steele, Robotman.

Cliff isn’t as unobservant as Gar hoped, and he finds Rachel, leading to more introductions, Cliff’s origin, the fact he hates the Robotman name, and some vague references to the Chief. As Gar and Cliff argue about Rachel being in the house at all, and what the Chief’s help could mean, she wanders off to find Larry Trainor, Negative Man, cooking up a storm in the kitchen. He remains heavily bandaged and with shades on through the episode, never actually showing anything of himself or demonstrating his power. Rachel asks if he’s invisible under all that, and he answers, “Wouldn’t that be nice?” Larry is also fine with Rachel being there, and Cliff finds himself outvoted. Gar gets sent to set the table.

Dick and Kory get to the local police station, and argue briefly about her coming in. Dick points out that both he has the badge and she doesn’t blend in. Oh, and she’s wanted, too. Going in alone, Dick claims Rachel is his sister’s kid, and the cop relays a version of the hunter’s story, giving Dick a new lead to follow up on.

While Cliff argues with someone, presumably Larry, Gar goes upstairs and talks to Rita Farr, Elasti-Girl, through her room door. He doesn’t seem to expect her to come out, and she doesn’t. In the room, we see pictures from her earlier life, and what she looks like now is… let’s just say it’s a big contrast. Dinner is an odd experience, with a huge amount of food and some amazing presentation. Rachel digs in and Cliff asks a lot of questions about what the food is like, and laments all he has lost. Rachel gets a great line/action off, everyone laughs, and Cliff relents, saying she can stay. Rita’s powers slip out of control, and Rachel takes it very much in stride, putting the woman at ease. Rita also eats a ridiculous amount, making a passing reference to her “condition.”

Their dinner is interrupted by the unexpected arrival of the Chief with a “new patient.” The team springs into action while Rachel looks confused. The new arrival is Shyleen Lao, who the Chief says was in an accident with liquid nitrogen. In the comics, this is a girl named Fever, who was briefly part of one version of the Doom Patrol before dying in an underground fighting club. Her powers have been inverted here, and when they spike out of control, Rachel steps in, calms her, and stabilizes her condition, with the Chief still wondering who Rachel is and why she’s there. Later, the Chief admonishes Gar for bringing her here and risking all their secrets, then proceeds to grill him about what she can do.

Dick and Kory pay a call on one of the hunters. He gives them a lead on “the old Caulder place” (the Chief’s real name is Niles Caulder) but only after we see Dick go berserk on him. This version of Dick Grayson has a temper more in keeping with Jason Todd or Wolverine on a bad day. Kory tries to smooth it over on the way out, after Dick sees how far out of control he is.

Rachel and the Chief have a chat where she apologizes a lot, and he asks a lot of questions and slips more firmly into the mad scientist role. He goes over Larry and Rita’s origins, and talks about his experiments pushing the boundaries of medical science. Gar talks a bit about his powers and why he might have so many limitations in this version. The Chief wants to examine Rachel and run some tests, and Gar encourages her to agree. The team is never named, but here, Dr. Caulder/The Chief refers to them all as “doomed” before he worked on them, so that’s a step in the Doom Patrol direction at least.

Dick and Kory drive to the Caulder estate, and she’s surprised at his loss of control. They talk about what’s wrong with him and what she doesn’t remember, which is a lot in both cases. Surprisingly for how she’s been acting a lot of the time, Kory tells Dick that no one manages alone. As Dick pulls up to the gates and cuts the lock open, Cliff wanders the mansion, looking at pictures of his past glory and human self. Rachel, down in the exam room, complains she’s been strapped down too tight, but the Chief pretty much ignores her with some easy explanations as to why he’s right, which he’s famous for. Gar is having second thoughts about all this, and the Chief bullies him. When Rachel starts objecting in earnest, Gar rebels and goes full green for a moment like his comic book self. Well, until the Chief shoots him with a tranq dart anyway.

This proves to be a really bad decision, as Rachel, shifting to her power/possessed voice, says he hurt her friend so now she’ll hurt him. The black energy that I guess is supposed to be the show’s version of her soul-self flows out, frees Rachel, and punishes the Chief badly. Upstairs, Dick and Kory are confronted by Robotman and Rita. Kory tells Dick to go when they hear Rachel scream, and she faces off with the others. Larry warns her she doesn’t want to see what he really is, and she, eyes blazing green, responds, “Same.” Dick gets down there just in time to stop Rachel from either going through or bringing someone (her father?) through a portal she seems to have created. Dick apologizes to her, hugs her, and she snaps out of it as the others all watch from the balcony, the potential fight apparently averted.

Later, Larry reports the Chief’s back is broken (again, he says. Again?). Dick, Kory, and Rachel go back to Dick’s car to leave, and Cliff urges Gar to go with them and have a life, which they don’t. Rita and Larry agree, and the Chief isn’t there. After some sad goodbyes, Gar hops in with the others, with all the main characters of the show together for the second time. Upstairs, the Chief, now in his wheelchair from the comics, looks out the window and broods.

What I liked: The Doom Patrol looks good. These seem to be reasonably faithful to the original characters, much more so than the Titans. Their upcoming show should be a good watch. The team, such as it is, is finally together. Including a lesser known Doom Patrol member like Fever was a nice touch. They did a particularly good job with Robotman, in appearance, characterization, and even the sound effects.

What I didn’t: Gar is a lot more limited than I thought. Then again, all the Titans seem lower-powered. The Doom Patrol’s secret headquarters just happens to be across the woods from the weird convent/cult that was taking care of Rachel? That seems a big coincidence. The fact that they’ve already recast some of the Patrol from this to their own show isn’t confidence-inspiring. The fire building scene was utterly pointless, and the hunters were badly done stereotypes. Ok, so they’re all in the car driving off to the sunset… where are they going? No one is wondering why Dick isn’t at work, especially with his partner dead? Dick’s badge is for a local police department, it shouldn’t be opening doors at every scene he gets to. The Titans, not even a team yet, felt like guest stars on their own show here.

I get doing a slow build, but this is really not going anywhere fast. Four out of eleven episodes to get your main characters together? I’m giving this one a low 3 out of 5. Hopefully, the next episode, “Together,” lives up to its name (“Titans, Together!” is as close as the team ever got an official battle cry, like “Avengers Assemble!”).