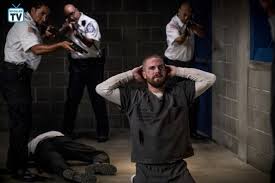 Arrow continues the saga of Oliver in prison and everyone else failing in new ways to catch Ricardo Diaz, who has long worn out his welcome in my book, in “Crossing Lines.” After the new status quo voiceover of Oliver and his inmate number, we get a strange scene of Oliver stabbing a guard, and have just enough time to wonder what happened when we get the expected time guide, now “12 Hours Earlier.”

At this point, Felicity is in Agent Watson’s office, giving her hell about not living up to her end of the deal to take down Diaz. Really, someone has to. He’s lingered longer than I think any other villain on the series, and he’s a lot less likable or interesting. Felicity does throw Watson a curve when she brings up the Longbow Hunters being around. Watson, not unreasonably, points out she has other criminals to hunt down. Watson is also happy to lay the blame for Felicity’s current problems on Oliver’s heroic career, at which point Felicity complains about the lack of justice and storms out.

In the prison, Stanley keeps babbling at Oliver, who is clearly feeling his self-inflicted injury. Brick says Oliver didn’t do what he meant, but Brick will honor the deal. He will arrange a meeting with “The Demon,” the supposed informant in the prison feeding information to Diaz.

Diggle and Lyla have an odd scene of their version of domestic life. Agent Watson leans on her boss about going after Diaz, and he seems disinterested. Whether he’s a petty bureaucrat who doesn’t care, or on the take, I’m really not sure. Diaz has slipped to 27th on the Most Wanted List, although how I can’t imagine. We see the lengths Felicity is willing to go to as she and Rene debate what to do next and acknowledge that John Diggle is a good man, but has other priorities.

Stanley and Oliver (did they deliberately give them the same names at the first names of Laurel and Hardy?) begin their adventure of sneaking through the prison after all the cells mysteriously open. Diggle, Lyla, and Curtis go on an ARGUS mission to Zurich, needing to get information from one of the notoriously uncooperative Swiss banks. They pull it off, although Curtis runs across some unexpected technical difficulties.

Desperate, Felicity manages to forge a strange new alliance down at Star City PD, bringing together her and Rene, Agent Watson, and a reluctant Dinah. Felicity appeals to everyone’s sense of justice, and points out they aren’t violating the agreement about no more vigilantes if they are A) out of costume and B) Watson is along to lend some degree of legitimacy. After a lot of debate and posturing, they agree to try and spring a trap on Diaz at the CDC. Watson emphasizes this is a one time deal.

In the prison, it turns out you can’t trust a supervillain. Who knew? After an ambush featuring Ben “Bronze Tiger” Turner and some thugs goes awry, Oliver demands some answers about the Demon, his only lead to Diaz. At the CDC (ever notice nothing goes well here on any tv show or movie?), Watson bluffs everyone in past security and they set up their trap, which has all the finesse of something you’d see on Scooby Doo. Watson gives Felicity some career advice, and they argue about the justice system.

Curtis figures out something troubling, and shares it with Diggle. Diaz shows up with his Longbow Hunters, and things immediately go wrong with Felicity’s master plan. With things going badly, Watson makes a really… interesting… choice and brings Rene along for the chaos. Diaz seems neither surprised nor interested to see the group show up, delegating his thugs to deal with them. The fight ensues in two places, as Watson and Rene clash with Red Dart and Kodiak, and Dinah faces off with Silencer again. Things go badly, Felicity tells Watson they all got away, and we see the Overwatch/Wild Dog team is up to tricks, even sans cool toys and codenames.

Oliver gets a “You don’t know me” lecture from Tiger, who they are desperately trying to make a more sympathetic character, like Lockwood on the most recent Supergirl. They hint at Tiger’s time on the Suicide Squad, although they don’t use the name. I guess they are saving that for the movies, despite DC’s claim the movies and tv shows are wholly separate. Diggle has an emotional talk with Lyla that covers a lot of ground.

Oliver and company (a different movie) get in to the closed-off and guarded mess hall and end up right where Brick wants them. Now Oliver is supposed to fight Sampson/Stardust, despite being injured and having already been in several fights. After a very brutal battle, Brick mocks Oliver, telling him the Demon is locked away down on Level 2, reserved for the worst of the worst. Oliver once again comes up with a unique way of overcoming the latest obstacle without quite going fully to the dark side.

Felicity and Watson have a sort of goodbye scene.  Watson’s boss was about as happy with her rogue operation as you’d expect, and Watson has been reassigned to Washington DC, far away from Felicity and Diaz. They part on much more friendly terms than we’ve ever seen them. Diggle and Lyla patch up their earlier quarrel.

Rene and Felicity show how far they are willing to go, but at least show a small bit of remorse for the grief they brought to Watson. Diaz shows one of his new toys, making him even more unstoppable than he’s been so far, which is the last thing we need. Oliver gets marched past everyone we know at the prison (there’s no way he would have been returned to his cell after the earlier incident) as he’s taken off to where he wants to go anyway. They march past Samson, badly beaten after their fight, but somehow wearing his sling on the wrong arm.

What I liked: The fight choreography remains really good on this show. Curtis has even cooler toys now that he’s on the government payroll instead of whatever was funding Team Arrow. Brick seems very amused by Oliver’s antics. We were spared another visit to Lian Yu.

What I didn’t: Just about everything else. The flagship show of the costumed hero network has no costumed heroes now that the new Green Arrow hasn’t shown up for a few episodes. Felicity is going down the dark, obsessed path and bringing Rene along with her. Dinah is unable to beat Silencer almost as often as no one can catch Diaz. I wonder how they got her? I’m disappointed Oliver was naïve enough to trust Brick.

While better than the mess of last season, I’m not loving this one. I’ll give it a low 3 out of 5.