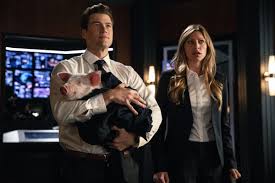 A Time Agent, a superhero, and a pig walk into a budget meeting…

The Legends try and get a handle on their new magic foes as they end up going on a “Witch Hunt.” They start with a shrunk down Ray using his suit to help upgrade Nate’s gadget that they were using to track anomalies. Now, it will help them find magical disruptions throughout history. Sara is just in the midst of telling the team that Constantine won’t be joining them when the ragged warlock stumbles in with a big trunk and bag. He insists that he is NOT a Legend, just a consultant, and will not be wearing costumes. Constantine’s other demands get interrupted by bad wordplay and an alarm from their new toy. Constantine and Sara agree there shouldn’t be anything going at the Salem Witch Trials, but they need to check it out. Constantine and Mick both refuse to go, and the team comments they miss Nate.

Nate himself is having a very tense dinner with his dad. Points to him for trying, but they just don’t seem to get on. They argue more, and Nate stalks off with his doggie bag. The Waverider gets to Salem in time to see Jane Hawthorne accused of witchcraft. Zari comments that there are monsters in Salem, but not magical ones. As the local wildlife suddenly starts acting in a really weird manner, there’s a montage of Mick and Constantine doing their version of the Odd Couple back on the ship. The rest of the team comes back and they try and figure out what to do next, as Gideon shows them a history of Salem I certainly don’t remember. John shoots down their theory of Jane being the witch, and the team focuses on her daughter, Prudence.

At the Time Bureau, Ava gets a shock when she finds out Nate’s been couch surfing in their offices. They have a talk, and she recruits him to help at the upcoming budget meeting. The team tracks Prudence as she goes into the woods, and she reveals that she’s not a witch, but has a very unexpected and Disney-ish visitor, leaving the rest of the team confused. Constantine joined them just in time to force the newcomer to reveal themselves. They’re a bit inconsistent when Constantine says this is new to him, but later seems to be very familiar with the type. There’s a lot of debate, Disney jokes, and the visitor gets Prudence to turn on the team, with musical accompaniment. Zari appeals to Prudence’s better nature and they bring the confused young woman back to the ship. Mick gives her a donut and a game with the running in-joke of Beebo visible on it.

The plan for Nate to help with the budget pitch hits a major snag when he sees who one of the people attending is. She brings in Gary as backup, and no one is sure that’s a good idea, except for Gary. After a bit of research, Constantine confirms the Fairy God Mother (no, really) is actually linked to Prudence, and the planned dispatching of her back to hell would have some nasty repercussions. Zari wants to help Jane, so Prudence won’t feel the need for the Fairy, but Sara points out the historical problems with that. Zari isn’t thrilled.

Zari pays a call on Jane, locked away in her big, iron-barred cell, which can’t be right. Metal was really expensive back then; we’re supposed to believe they have enough for a jail cell? Zari tries to get Jane to escape, but the woman won’t go. She believes both that she’s where she’s supposed to be, that she needs to forgive her persecutors, and that things will get worse for others if she goes. Zari makes things very personal, but Jane won’t go, and Zari barely escapes as the officials come in.

A frustrated Constantine hears laughter, and forces the Fairy out for a chat. They talk and John shows he’s both a shrewd detective in his own way, and points out the inconsistencies in her story. They bicker a bit and she makes some veiled Cinderella references. Finally, she teleports away, leaving behind a very annoyed warlock.

Hank Heywood, Nate’s dad and apparently final (only?) word on the Time Bureau’s budget, demands to know why they should give them any money at all. He doesn’t remember most of their exploits due to history correcting itself. Gary tries to help, but really isn’t good at this sort of thing. Hank insists on proof of magic before he uses Department of Defense money to “fight fairy tales.”

The rest of the team realize Zari has slipped away, and Gideon isn’t as helpful as she could be. The trial goes about as well as you’d expect for such a thing, and Zari throws a fit. She uses her powers and it does sort of resemble their fears of witchcraft. Her impassioned speech falls on deaf ears, and she lets the witch hunters grab her as she realizes what she’s doing. Reverend Parsons snatches away her Totem as he declares hanging isn’t enough and that they must burn.

Back on the Waverider, the evil Fairy God Mother taunts Prudence, and manipulates the situation by carefully showing her a few things Sara said about history. A distraught Prudence gives in to the Fairy’s urgings, and leaves the ship, the Fairy casting a few spells on the way out to take Ray, Mick, and John out of action.

Ava relays to Nate how badly the meeting with his father went. Ava presses Nate to go talk to Hank, convinced he can help. I’m really not sure either when Ava became such a Nate fan, or when she saw enough of him to convince her how good he was at persuading people, which has never been one of his strengths. As Gary makes painful jokes at Hank, Nate goes back to the Waverider, where he comes in amid the chaos and shows a communication skill that doesn’t make a lot of sense.

Back in Salem, Jane and Zari have been tied to the stake and the kindling piled on. This is where I point out that no one was burned at the original witch trials, which Mick commented on disgustedly earlier. Sara shows up and fights to free Zari, which is really impressive with the big skirt she’s wearing. Finally, Prudence tells everyone to stop, and the Fairy freezes everyone except Prudence, Jane, and Zari for some reason. While Nate lets out a lot of pent up frustration out at his dad, Zari pleads with Prudence to not hurt everyone. Zari gets through to her, finally, and the Fairy is cut loose. The rest of the Legends show up just in time to calm everyone down, and John Constantine gets a bit of payback on the Fairy. Nate persuades his dad to help out the Time Bureau. Zari escapes unburned, but her Totem has been badly damaged.

While Prudence and Jane get their happy ending, Legends style, Constantine drags the Fairy off to the woods. He makes her a very surprising offer, and we get a few hints about whatever it is that John is running from. He sends the uncooperative Fairy back to hell. Sara and Zari have a heart to heart about who they’ve lost and how they feel about it. We get another Beebo reference as Nate brings his father up to date on his adventures, and Hank gives his son a very backhanded compliment. Ava make a surprising offer to Nate, and Ray is surprised when his friend doesn’t come back to the Waverider with him.

What I liked: I’m very amused at how widely Beebo has spread in the Legends canon. The little blue guy is everywhere. Constantine gets a lot of screen time and some very cool special effects. This was a very entertaining spin on the Fairy God Mother idea. It was nice seeing Ava as more than Sara’s girlfriend again. I’m really intrigued about whatever mess Constantine has gotten himself into.

What I didn’t: They made this plot really club you over the head with similarities to one of the Legends major issues. Mick did virtually nothing this episode, and Ray was just comic relief again. I’m not sure about splitting Nate off from the team.

I really enjoy the entertaining weirdness of the Legends. I’m not sure how this season will play out, but I’m betting it’ll be a fun ride. I’ll give this one a 3 out of 5.