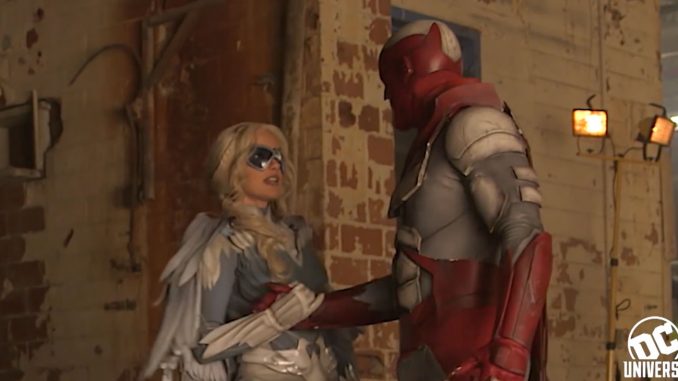 Birds of a feather fight together…

The DC Universe live action Titans continues with “Hawk and Dove.” That pair of heroes has had several incarnations, but this seems to be Hawk I and Dove II, the pair that had their own series for a while in the 90’s. The episode opens with a reversal of many comic stories, big bad Hawk captured, chained, about to be tortured, when Dove comes in to save him, kicking ass and taking no names at all. I will say the costumes look pretty damn good. After the fight, they make it the apartment they share in Washington, DC (also per the comic). Hawk is very much the worse for wear and, as we see him get in the tub, has scars everywhere. The heroes have been all over on the power scale in the comics, but are usually at least low level superhuman. Here, they seem to be more on par with Robin— skilled normals.

The two are clearly a couple, as some versions have been (the originals were brothers), and Hawk gives Dove (Hank and Dawn, respectively) a present for their three and half year anniversary. They go to bed together and we see what to my recollection is the first live action hero with ED, which I could have lived without. While getting meds from the cabinet, Dawn flashes back to four years ago, when we see Hawk, Dove, and Robin (there’s a definite bird theme here) were allies, and that Dick’s “boss” didn’t approve. Well, in the comics, Batman frequently gave Robin grief for being with the Titans, so that works.

Dick and Rachel continue their road trip, where he keeps treating her like a kid, which annoys her, and asks her questions she won’t answer. She is continuing her coffee habit from earlier, which Dick isn’t sure about, but goes along with, then teases her for the ridiculous amount of sugar she pours in. Dick tells her they are going to see old friends of his to find a place to keep their heads down, and gives her the wonderfully reassuring advice that, “Sometimes there’s no time to be scared.” Dick’s notional partner, Amy Rohrbach, gets briefed on the weird findings from the coroner on the guy Rachel killed last time. Charlie, the coroner, has an odd sense of humor.

Dick and Rachel end up at a motel, where he goes off to find pizza for them and finds out she likes Game of Thrones. She largely doesn’t care about what’s on the pizza, but both agree no pineapple. Dick, in the car, scrolls through his phone contacts, which include familiar names like Alfred Pennyworth and Donna Troy. He calls Alfred for some help with something. Rachel wanders the hotel room, tries and fails to open Dick’s Robin case, then looks up his past and her mom’s case on the laptop he left. Amy calls Dick and briefs him, then agrees to send him details. Those pages print out as Rachel uses the machine and she has a bad experience with a picture and her reflection. Dick later finds her huddled in the tub with hand drawn crosses on paper all along the edge.

In St. Louis, a very boring family get word that they are “activated” and Dad, Mom, Sis, and Biff (no, really) shoot up with syringes that turn their veins blue. This group eventually turns out to be a scaled down version of the Nuclear Family, a minor group of villains that fought the Outsiders years ago.

Driving on, Dick quizzes Rachel about Nathan Parks, the dead guy, who belongs to a doomsday cult that believe they are supposed to prevent Doomsday. She compares their pasts now that she’s an orphan too, and asks about being raised by a billionaire. Dick evades the question and then the most unlikely thing in the series so far happens: he finds street parking with no effort outside an apartment building in DC.

Dick tells Rachel (again) these are old friends and adds he hasn’t seen them in a while. Dawn answers the door and is surprised to see Dick. Rachel touches Dawn’s hand and we see at one point Dick and Dawn were more than friends. Dick gives Dawn some details on what’s going on with Rachel, and then Hank gets home, and is less than pleased to see Dick. There’s some bad blood there. We hear again about the plan for Hawk and Dove to retire soon. Hank grouses some more about Dick being there to Dawn. This Hank is just as much a jerk as the comic book one. Rachel asks Dick some questions about what she saw, and repeats her claim from the first episode that you can’t lie to her. Later, Dick gets a call and agrees to some kind of meeting.

In the morning, Dawn and Rachel get back from some kind of shopping, because they’re girls I guess, and Dick is amused Rachel is in so much of a better mood. Rachel has nicknamed Dawn “Khaleesi.” Dawn and Dick talk, and cover his Wayne Tech computer, their past, and Dick tells her he’s changed a lot and not for the better. As Rachel exclaims while catching up on Game of Thrones, Dawn wonders what Dick is talking about, and Hank comes back in time for another jealousy hissy fit. Hank and Dick are about to fight when Rachel freaks out and shatters several things in the apartment, startling everyone at this display of power. Amy gets home after a hard day’s work, tries to unwind, and gets some unwelcome company in what might be her final appearance.

Dick checks on Rachel, who is sorry she’s losing more and more control. Dawn checks on her and apologizes for Hank being an asshole. They definitely are trying to work in as much adult language as possible. Despite Dick’s warnings, Hank and Dawn leave for the infamous “one more job” they’ve been talking about. Rachel urges Dick to go help. They talk about him helping people, and she uses his own earlier argument against him to get him to go.

Hawk and Dove go on their raid, which is going ok until Hawk gets shot while checking on the money they apparently plan on stealing. He goes down, they get surrounded, and then Robin shows up. Even the ultra-violent Hawk is appalled by Robin’s vicious fighting style. Rachel finds a note Dick was hiding for Hank and Dawn, learns Dick’s plans, and is crushed.

The trio get home (Hank, who was just shot, now seemingly fine) and can’t find Rachel until she turns up on the roof, where Hank earlier gave Dawn the present of a dove coop. she’s sulking and mad about Dick’s plans to leave her behind, and Hank isn’t too happy to hear about it either. This is when the Nuclear Family show up and pretty much kick everyone’s asses. By the end of the fight, they are fine, and the heroes are left with a literal cliffhanger, one likely dead, and one uncertain. The Family gets away with Rachel, while Dick (you knew he’d be ok) has what looks like a last moment with one of his friends. The episode ends with a raven flying by with eerily glowing eyes. Because we’ve never seen that before.

What I liked: They are definitely scouring the DC archives to find both Hawk and Dove and the Nuclear family, so points there. Hawk and Dove looked great. Dick does have some cool toys with him. The characterizations for Hank and Dawn were about right. I’m glad Dick reached out to Alfred, and I’m intrigued by the Donna Troy reference on Dick’s phone.

What I didn’t: Hawk and Dove were watered down a lot, as were the Nuclear Family. Hawk and Dove seem like normal, but Hank shrugged off the bullet wound fast. They seem to be building a George RR Martin-like body count, and I don’t like that for a superhero drama with characters that have a history. Maybe that’s why they talked about Game of Thrones several times? I really don’t like Dick as a vicious psychopath, which even his one-time friends are calling him.

I guess Starfire was off killing more people and Gar was stealing more stuff this episode.

I’ll give this a low 2.5 out of 5. I’m a lifelong Titans fan. It’s a bad time to be that between this show and recent events in the comics.