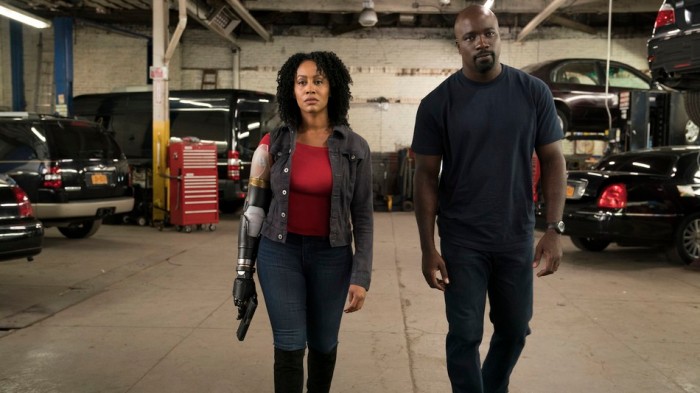 So, who IS the sidekick?

After the surprising cliffhanger of last time, Luke is in a lot of trouble in “On and On.” Paralyzed by Bushmaster’s drugs and kicked off a high bridge, Luke is sinking and in imminent danger of drowning. After a lot of flashbacks of people in his life, our hero manages to shake off the drugs and swim back to the surface. How that works, considering Cage has ultra-dense muscle tissue, I’m not sure. Before someone goes there, this isn’t a racial thing, it’s a “man with steel hard skin and radically altered dense tissue shouldn’t be able to swim” thing. His weight is most commonly given as 425, which, packed on to that size frame, just seems to make swimming improbable at best. Yes, I’m being “that guy.” I’ll move on.

Luke staggers to his father’s church and passes out on the floor, waking up on a pew later. See above comment for how the hell did he get there? After some initial confusion, Luke gets some news he didn’t want to hear. After some bickering, the Reverend displays some concern for his son as Luke shows some signs he hasn’t wholly recovered from his go around with Bushmaster.

Misty is spending her new free time since quitting the force by trying to get her basketball game back. It’s not going well, and Captain Ridenhour drops by to offer some advice. Misty isn’t pleased to see him and reminds him she quit and she’s not coming back. They bicker a bit, and Misty is surprised to learn that the Captain is running an off the books investigation. They disagree about that and, once again, about Luke. Ridenhour makes a request that she refuses and then leaves her to her game.

Mariah is ranting about Piranha being missing, and him being one of the few people she apparently trusts. Shades has checked everywhere, and gotten no leads on the missing money man. Mariah also is aware that someone is talking more than they should be, and she’s about as fond of “snitches” as you’d expect. Mariah turns bloody and ruthless in an effort to inspire the men. Shades points out, after they are alone, that this might not be the best way to go, but she doesn’t want to hear it. As Shades and Comanche start to leave, Tilda comes in, enjoying the club’s music and having a brief staring contest with Shades.

Back at the church, Reverend James Lucas is actually being considerate of his son, but Luke doesn’t want to hear it. This degenerates into another argument, and neither one of them are likely to back down. Luke finally leaves as they toss barbs at each other. I have to say that, while I see Luke’s side, he’s not exactly making anything any easier.

Bushmaster has Piranha, and things aren’t going well for the financier. He does stick to his professional integrity, so I’ll give him points for that. His being a fan of Luke Cage is yet another thing that sets Bushmaster on edge. Bushmaster makes his demands, Piranha refuses, and you can just tell this isn’t going to go well for the prisoner. Luke and Misty compare notes about what they’ve learned about their various enemies, and Misty is surprised by some of the developments. They have some great banter about who is whose sidekick.

They get to the garage where the cabs that were hunting for Luke and Piranha are based out of, and there’s a great fight scene. Luke spends a lot of it leaning back and watching Misty kick ass. Her mechanical arm gets damaged slightly, and looks a bit more like her comic book counterpart. They finally get a lead on Piranha, but aren’t happy with what they find. It really is a big mess with some darkly entertaining symbolism.

Tilda visits Mariah in her office, and shows she shares a few traits with the Stokes family. Mariah and Tilda debate family history and Mariah’s current activities. The former council-woman is just as warmly receptive to criticism as she usually is. Mariah shows her estranged daughter that crime does, indeed, pay.

Luke and Misty have done the right thing and called in the police after their discovery, and it’s an ugly scene on many fronts. Annoying detectives Bailey and Tyler look sickened at what they’re seeing, while Ridenhour gives Misty a hard time. Misty and Ridenhour go from disagreeing to flat out arguing about how to handle the case and Mariah in particular. The cops shoo Luke and Misty away, and, after more disagreements, they go.

Rindenhour pays a call on Mariah, bearing bad news. Their rambling conversation invokes Martha Stewart, El Chapo, and Marion Barry. Donovan the annoying lawyer is there through the conversation, making nothing easier. I really do get the feel that Ridenhour is trying to do the greatest good for the most people, and no one is really helping him out. Ridenhour tosses in a few hints about something we don’t know yet from Mariah’s past, which enrages her (not that this is hard to do). Mariah checks a few things, gets more bad news, screams in frustration and launches a new desperate plan with the help of her loyal to the point of his own likely destruction aide, Alex.

Just like Shades has been telling Mariah things that are true but she doesn’t want to hear, Comanche does the same to Shades. They discuss their fellow thug, Sugar, and things that have changed him, and joke about popular tv show “This Is Us.” They both get texts with different news and go their separate ways.

Bushmaster is gloating in his victory and being very flashy as he rewards himself while Anansi looks on disapprovingly. The older man warns him about his hatred becoming all consuming, but Bushmaster isn’t going to listen. Bushmaster is set on his path and uses some memories from his childhood to justify it. The man has no forgiveness in him. Anansi offers some Biblical advice, and Bushmaster answers in a way many would call sacrilegious. Luke goes back to church and talks to his father about memories and his mother. Luke has at least come to a good realization with all of this.

Ridenhour forces a meet with Comanche, and neither is happy with the other. The meeting gets interrupted when Shades shows up. Things take a lot of surprising turns in a very short time. Shades shows exactly how much of a survivor he is, and how skilled he is at doing what needs to be done. The man has fast hands and a fast brain, you have to give him that. He might be one of the most dangerous people on this series. He does get a bit worked up and probably blows some of his carefully constructed plan near the end of the scene, though.

Tilda tries to figure out what is happening as Mariah is freaking out, clearly not her usual mostly controlled self. Things don’t get any better as Bushmaster bursts in and surprises both Mariah and Tilda. She recognizes him, and they have a few words. Misty is moving on with her own life, but gets a phone call that shakes her up and changes her plans for the evening.

Bushmaster is in fine villain form as he rants and sets up an elaborate deathtrap for Mariah and Tilda, who is no doubt really wishing she’d refused to take part in this little family reunion a few days ago. He goes on about his history and the source of his grudge against the Stokes family, a name that Mariah vigorously objects to. This is cut back and forth with scenes of Luke talking to his father about their not exactly smooth past.

The episode wraps up with Bushmaster giving Tilda a horrible choice, DW giving Luke a warning, and some unexpected last minute rescues. Misty goes to the scene of a tragedy which is going to change things for her. Luke does what he does and gets a very unexpected job offer, while Shades hangs out at Harlem’s Paradise, surveying his domain.

What I liked: Bushmaster’s origin sheds some light on him, but he’s still a seriously screwed up man. Luke seems to have shaken off whatever was making him a borderline villain near the start of the season. I like Misty standing her ground and not letting others push her around, even people she respects. Shades is definitely a bad guy, but he’s an almost admirable one. I like that Ridenhour keeps showing more layers to himself.

What I didn’t: If Luke’s mission is really to protect people, he shouldn’t be turning down help. He’s barely working with Misty, and hasn’t reached out to the other Defenders. Danny could help him both with the fight and the money problems. He does need to put aside his issues with his father at least until the present crisis ends. As nuts as Mariah keeps acting, I’m surprised she’s lasted as long as she has. And I mentioned the issues with Luke’s weight/density up top.

I liked this episode, but I don’t think it was one of their best. I’ll give it a 3.5 out of 5. I admit, I’m looking forward to the end of the issues with Bushmaster.