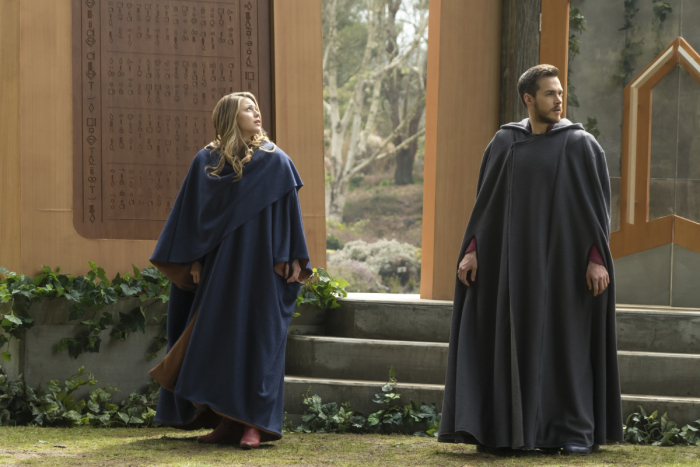 Supergirl and Mon-El are powerless before the might of the Snuggie!

Taking a break from the urgency of the World Killers, even if this mission is related, Supergirl works towards her season finale with “Dark Side of the Moon.” Aside from possibly trying to appeal to Pink Floyd fans, this title has nothing whatever to do with the episode. It does, however, bring one of the important bits of classic Supergirl mythos that the series has not only ignored, but contradicted until this point.

Mon-El and Supergirl cruise through space in the ship they borrowed from J’Onn, enjoying the view. They find the source of the rock they need to hopefully cure Sam is, in fact, a domed city floating in space, which is not at all what they were expecting. Their ship is targeted by a tractor beam, but somehow, using Martian shapeshift technology gets them free of it in a way that’s not really clear.

J’Onn and Winn worry about Supergirl’s mission and Reign’s growing immunity to Lena’s synthetic kryptonite. Their backup options aren’t really hope-inspiring. Alex and Ruby hang out at Alex’s place, talking about Supergirl being off in space to help Ruby’s mom. They go out for ice cream and banter about Alex’s driving. It’s a fun day out until someone does their best to kill Alex, but she saves the day because there’s a convenient concrete, reinforced, bomb-proof trash can near by. You find those in all parks, don’t you?

At Lena’s lab, the DEO techs are wandering around and annoying Lena. Reign is taunting her through the screen that she can now somehow see through. I get the growing immunity to synthetic kryptonite, that makes some degree of sense. But the cloaking wall losing effectiveness is just… odd. They exchange threats, and Reign puts their situation starkly for Lena, who isn’t happy about what she hears.

Supergirl and Mon-El land in the strange city, getting through the dome… well, we don’t know. They just do. They wander around and find a marketplace. With plenty of people looking on, they randomly steal some cloaks to hide their costumes, and no one says anything. Supergirl goes back to lamenting about having to disguise herself and keep secrets, while Mon unhelpfully comments that the Legion doesn’t have secret identities. In their huge membership over the years, I can only think of one who kept their face hidden, and there was a good story behind that. Using Mon’s Legion Flight Ring, they map out the city and figure out where to go. The rings have a lot of different uses in the comics, but holo-mapping is new. Somehow, both of them have completely lost their powers by being here, not the usual taper off of Kryptonain/Daxamite physiologies that happens in the comics, and even earlier in this series.

Alex brings Ruby to the DEO, and the kid gushes with excitement about Alex saving the day. Alex is a lot more worried than Ruby, and, after sending her off, wonders how to keep her safe if someone is trying to kill Alex. Their first search of suspects turns up ex-sheriff Ronald Collins, who was the bad guy in the flashback “Midvale” episode. He’s recently paroled and has relocated to National City. While Alex goes to investigate and J’Onn does whatever it is that keeps preventing him from being useful lately, Winn gets stuck watching Ruby, and is not pleased.

Mon-El and Supergirl wander around and gradually realize this is Argo City, where Kara grew up before being sent to Earth. In the comics, Argo survived the destruction of Krypton under a survival dome and sent Kara to Earth years later. They also like domed cities over on Krpyton, the series. Maybe it’s a recurring theme. After a quick confrontation with some flying robots, our heroes meet Alura, Kara’s mother, and there’s a joyful, if confused on both sides, reunion. They catch each other up on their lives and then introduce a dramatic complication for the rock the heroes need to save Sam, called Harenel here.

A stressed-out Winn waits for any kind of signal from Supergirl, and doesn’t handle questions from Ruby well. Alex confronts her former nemesis in a bar, and learns some surprising things from and about him. After crossing him off, we see Alex is being tactically brilliant. Someone is trying to kill her and so she’s A) out alone and B) on a motorcycle which provides no security at all. Or at least, she was, since the would-be killer strikes again and blows up her bike. J’Onn and the DEO show up to play CSI, and Alex worries about what might happen to Ruby if she’s killed. She comes up with a plan that J’Onn doesn’t like but goes along with.

Supergirl and Alura tour the gardens and share memories of flowers. They also talk about Fort Rozz, which used to be so important to the show, and Alura’s connection to it. They also talk about Alura’s sister Astra, who was a villain for a while before reforming and then dying. I will give them credit for touching on so many past plot points that make sense to come up during the conversation. Mon-El wanders around on his own, finds a sick kid, and heals him with some future tech from the Legion. The kid’s name is Val, the same as one of the major characters on Krypton. I guess they’re trying to link the shows a bit, or show that it’s a common name?

Lena and James discuss the stark choice Reign is forcing on her. The relationship between these two is becoming my favorite part of the show, especially as so many of the characters are acting so stupidly this season. Lena has some justifiable worries and concerns, and James is both supportive and makes sense. It’s a rare scene of two adults acting like adults.

Winn goes to apologize with Ruby and draws on his own experience with a supervillain parent to bond with her. She’s surprised at his story. He at least acknowledges his faults. Alex and J’Onn set a trap for Alex’s stalker/assaulter. Supergirl meets up with Mon-El and talks about how wonderful it is to be able to be Kara Zor-El without worrying about Kara Danvers or Supergirl. Supergirl and Mon-El arrange to go before Argo’s Council and plead their case.

The Council meeting doesn’t go smoothly. Kara makes a good case, and Alura is very eloquent in backing her up. The Council doesn’t really believe the World Killers are real, and the city has a desperate need for the Harenel. As Alex’s trap doesn’t draw a response, the Council, led by Selena, who looks very familiar, and Tim Russ, who played Tuvok on Voyager, aren’t all that interested in helping some far off planet none of them have been to.

Alex finds a sniper who is utterly unimpressed by the careful trap and deception and starts shooting straight at Alex. J’Onn warns her to be careful and then does absolutely nothing, which seems to be his specialty this season. For some reason, someone with Superman-level powers plus several can’t seem to do anything about a sniper, leaving Alex to chase him down with a rooftop chase that ends in Alex pulling off some stunt that should be in a wire-work martial arts feature, like A&E’s Into the Badlands.

Alura pleads with the Council to help Kara while the shooter reveals he even knows J’Onn is a Martian. We finally learn why the sniper has a grudge against Alex, and it’s a classic motivation. Selena, the Council leader, breaks the tie and agrees to help Kara. Selena says that since Argo survived the destruction of Krypton, they must set an example for future generations. Mon-El talks up Supergirl to Alura, and the two heroes saunter back to the ship, with no sense of urgency considering they’re trying to save their friend and prevent a superpowered rampage back on Earth.

Alex and J’Onn talk about the risks she takes and if that would be fair to a kid. Alex is full of doubts about her choices, and J’Onn provides some reasonable counterpoints to her fears. It’s sort of a nice father/daughter scene, especially since Alex’s father is still off missing in action with no real effort being made to find him, if I remember rightly. Poor Jeremiah. Just another dropped subplot.

Selena reveals why she looked familiar earlier, although how she’s connected to the rest of this I’m not quite sure yet. Interplanetary conspiracies are something the DEO should probably be looking into. Reign taunts Lena about how alike they are as Lena looks more and more concerned. The episode ends with Reign breaking free just as Supergirl and Mon-El get back, setting up for a really big fight next time.

What I liked: It was nice to see Argo City brought in to the series. J’Onn is a good surrogate father for Alex. James and Lena make a great couple, and they are some of my favorite parts of the show. J’Onn’s ship having shifting capability makes sense. Ruby and Winn bonding over parental issues

What I didn’t: There’s a lot wrong here. Shapeshifting shouldn’t free a ship from a tractor beam, and how did they get in the dome? They seem very unhurried in Argo considering the stakes back on Earth. J’Onn was utterly useless with the sniper which made no sense. Why would Alex run around on a bike by herself with someone trying to kill her, and why would J’Onn let her? And how in hell did she pull off that flip up onto the roof stunt? Is Alex finally getting powers of her own? How is Reign seeing through the shroud? Why does she goad Lena to kill her?

All the CW shows have been in a slump this season (except Black Lightning, which just started), and this was sadly no exception. I’ll give it a 2 out of 5.