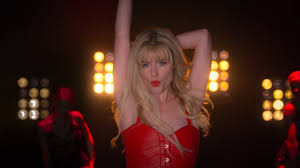 Episode 7 of Jessica Jones’ Season Two, “AKA I Want Your Cray Cray,” is different on several fronts. Almost the entire episode is flashback, giving us some really interesting insights into events that helped shape Jessica, Trish, Alisa, and, to a lesser extent, Trish’s mom Dorothy. Even the voiceover is different, with Alisa narrating her side of what happened after the accident. By the time this is done, one could argue that Alisa is even more of a tragic figure than daughter Jessica.

The episode opens with Alisa explaining how the family ended up in the car on that fateful day. It adds another layer of tragedy to the whole event, making me feel even worse for what’s left of the Jonses. After the accident, Alisa, who is being called Susan, wakes up to her new and very different world. She was horribly burned in addition to the rest of the injuries from the accident, and her first viewing of herself isn’t a good one. She bangs up a lot of the staff and equipment, almost manages to hurt a terrified young Jessica, and is finally talked down and tranquilized by the younger version of Dr. Malus.

After a long time lapse, Alisa wakes up again, overhearing some of the staff talking about her. Given her first wake up outburst, it’s wholly understandable that the lady isn’t popular with the workers. She ends up taking with Malus, who acts like he is wearing the right shirt (Grateful Dead), and the younger Leslie Hansen. Alisa is chained down and not happy about it, and rages when she finds out about her husband and son dying. Malus tells her about the genetic work they’ve done to save her, and shows her that she is at least no longer hideously scarred. She latches on to some hope about Jessica being alive, but is far from happy when she hears Malus isn’t going to let her go see her daughter.

With another time jump, Jessica is recognizable, but a sulky teenager at a club. Eventually it becomes apparent that this is a party for one of Trish’s videos, a second act to her being the child star she was earlier. Jessica is very out of place and not enjoying herself. Trish and Jessica argue over Jessica’s reaction to the song and video, and I’m kind of with Jessica on this one. Jessica finally gives some ground on the issue of the song possibly making some people happy, but then they argue over Trish dropping out of college. Finally, Trish gets taken off to the bathroom by another friend, leaving Jessica to her bourbon. I guess that started early.

At the bar, Jessica runs into Dorothy, Trish’s mom. They get along about as well as ever. Dorothy, to no surprise, is working an angle and still taking credit for Trish’s early success. Jessica ends up sort of flirting with the bartender, who is something of a character himself. When he gets a lecture from the manager about how he pours his drinks, the bartender grabs a bottle as “severance pay” and walks out. How many times have we all wanted to do that at our jobs?

Outside, Trish proclaims a party back at her place, which worries Jessica both from the drugs and because of her need to study. They argue more, and Trish turns hurtful. Jessica, to prove a point, tears open an ATM to show she doesn’t need Trish to get money. I guess that one didn’t have a working camera or something. Trish takes off with the party crowd, and Jessica finds the bartender who quit across the street, waving the bottle and offering to buy her a drink.

Back at IGH, Malus and Alisa are arguing about her treatment vs. them perfecting their new technology. They talk about saving her life and some of the side effects, including mood swings and violent temper. They argue more about her going to see Jessica, and Malus finally tells her about the adoption by the Walker family. Have we ever heard anything about Trish’s father? Somehow, I don’t think we have. The argument leads to another outburst from Alisa and Malus tranquilizing her again. He does seem to actually care about her, which puts him above at least some mad scientist types.

Jessica and her bartender, Stirling, are making out on the street while he tries to guess her middle name. Eventually, we learn it’s Campbell, which on the show is her mother’s maiden name and a nod to some of Jessica’s comic book history. They banter about the need to know middle names, and then he shows her what will become her signature leather jacket, although how they get is kind of not cool. Later, at their place, Stirling argues with someone on the phone, and we find out some about his past, especially his family life. He urges her to reconcile with Trish, who is some of her only family now. He has a project he’s working on that suggests how she later named something important to her. They finally agree to go meet his family, which Jessica hasn’t done, and she’ll introduce him to Trish.

We never do find out about the part with her meeting his family, but they meet up with Trish at another club. Trish is not looking her best, and Jessica is worried about her as they catch up on each other’s lives. Trish is stunned to hear Jessica dropped out of school. Jessica waves Stirling over, and Trish is impressed at both his looks and, later, his plan. Stirling makes a pitch for something that annoys Jessica, but he seems like he’s being sincere about his idea. They banter about not needing anyone and a new pet for Stirling.

Alisa does something with some tragic results that we’ve heard about before. If nothing else, she’s clever and determined. While that drama unfolds, Jessica and Stirling are a surprisingly cute couple as they debate what constitutes a snack. This comes to an end with some unwelcome visitors, who have some business with Stirling. The man may have some big ideas, but he’s got bad judgement. Things get physical and Jessica runs them off.

Out on the street the next day, the escaped Alisa poses as an old teacher of Jessica’s, and follows her only lead: Dorothy Walker. As we already knew, Dorothy survives the encounter. Alisa is surprisingly in control throughout, even when Dorothy badmouths Jessica. Dorothy falls for some flattery and agrees to help “Laura” find Jessica.

Mother Alisa there tries some well-intentioned stalking, and learns Jessica isn’t exactly “normal” after the accident, either. She follows Jessica to a bar, has a brief moment with her in the bathroom, and then follows Stirling outside when the thugs from the other night come back. He says some things that Alisa overhears, and she ends up seriously overreacting and ignoring his explanations. This leads to Jessica finding something truly tragic a few moments later.

A very crushed Jessica goes to find Trish, and gets some interference from Trish’s party-girl friend Kourtney. With a K. Of course. Jessica finds Trish who is clearly at a new low. Jessica shows a truly impressive amount of self-control extricating Trish from the mess she’s in, and suggests something neither of them want, but is something Trish needs. They end up talking to each other on a familiar rooftop, and see something we’ve seen before in Jessica’s life.

Alisa, shocked by her own actions, staggers “home” to Malus’ clinic, where most people freak out when they see her. Malus actually talks to her and calms everyone down. Malus and Dr. Hansen argue about bringing in someone else. Malus talks Alisa down again, and he really is concerned about her, or putting on a hell of a show. This all ends up being what Alisa tells Jessica when they met at the end of last episode. Jessica isn’t feeling forgiving, and the episode ends with Malus taking some action to handle the situation.

What I liked: I’m not wild about flashbacks at this point, as I think they’re overused. But this was really nicely done and filled in a lot of holes for both Jessica and Trish’s past. I was intrigued by the name thing, and how close that name is to someone else’s. Dr. Malus is a lot more three dimensional now, and isn’t just some stock mad scientist. I think I liked Stirling, depending on the truth of his confrontation in the alley.

What I didn’t: I don’t care what era it’s in, I don’t like Dorothy. She’s incredibly obnoxious and self-centered and with few to no redeeming qualities. Jessica has had far too many tragedies in her life, and I see where her emotional trauma and alcoholism come from. The reveal of Alisa/Mom being the mystery woman is a bit soap opera for me, and I’m not sure I like it.

Another impressive episode from a series I’m really enjoying. I’ll give this a high 3.5 out of 5.