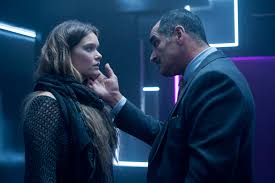 A not so good meeting of the minds

Legion continues its surreal second season with “Chapter 15.” It starts off with yet another lecture, this one on “Moral Panic” with a backdrop of what’s supposed to be the Salem Witch Trials and, much later, the anti-comic book movement of the 50’s. I’ll give them points for at least accurately showing witches were hanged and not burned at the stake. That was the Inquisition, hundreds of years earlier and an ocean away. It ends with a great question, especially in today’s political climate: What’s more terrifying— fear, or the frightened?

Farouk is dressed in a spotless coverall working on a Rolls Royce. He’s playing with some kind of weird machine that looks a bit like a gas station coin-operated vacuum. The way he, and this show, works, I’m sure this is some metaphor for something or other he’s up to. There are also several flashes of David in that big tank he floats in to contact future Syd. This time, he was in there to get to Farouk, and they have a meeting in some psychic construct of a dining room. David is still raw and furious over the death (we think) of his sister Amy, and Farouk is his usual, calm, unflappable self. They argue about what Farouk did, David’s unconscious desires, and the masks people wear. Farouk decides he was wrong and David isn’t ready, so he sends him back to the “kid’s table.” There’s some kind of weird interaction between David and Amy, or a vision of her, or something, and he ends up back in the tank.

Trying to go to bed that night, David is hearing voices in his head. Where those are from is anyone’s guess. Syd asks if he wants to talk about things, and warns him that Farouk wants him emotional and distracted. This drifts into a weird discussion about how David interacts with future Syd. It’s a weird place in your life when your girlfriend sets rules about how you deal with… her.

Farouk is back in his Rolls in that weird white limbo when he starts up whatever that machine is supposed to be. This time, he’s not going after David, or at least not directly. After some special effects, he ends up, somehow, with future Syd. He makes more of his outrageous claims and manages to confuse the girl from another time. Syd lets something shocking slip that amuses Farouk to no end, and he agrees to help her.

Lennie is in her cell, snapping her fingers and reliving Amy’s death/her rebirth. Syd stops by with an interesting analogy about what Lennie is while Lennie makes weird/sexual comments. Lennie goes on to make claims about what Farouk did to her, which to me seem like an attempt to play on Syd’s sympathies. Syd ends up walking off, leaving Lennie to return to snapping her fingers.

Next up is Ptonomy in some kind of nightmare realm where he ends up picking up a can on a string. This devolves into weird music and more of the black goo we’ve been seeing all over the place. The nightmare shifts to Ptonomy being attacked by the Admiral and his weird female clone-bodies that are evidently called Vermillions. After that, Ptonomy walks from room to room, whispering into eggs and leaving them on nightstands by people’s heads.

Agent Clark stumps through the base on his cane. He realizes he’s being followed, and each time he looks back, sees more of the Vermillions in randomly odd poses. He ends up waking up in bed also, and finds a broken egg by his bedside. Clark finds Ptonomy and has a paranoid sounding talk with him.

As Syd sleeps, David goes back to his tank for another chat with her future version. He’s mad and wants to know if she knew what was coming for poor Amy. I’d want to know that, too. He rages about what she’s asked of him and working with Farouk. Syd says it’s hard for her to stay focused, which isn’t much of an answer. She doesn’t offer much by way of facts or useful information, and they come to a decision that I suspect won’t last long.

There’s a mini-lecture about dreams and memory as Syd wanders the hallway and the Admiral gets put to bed. Syd wakes up, confused, finding herself near Clark and Ptonomy and asks what’s happening to her. Actually, “What’s happening?” is a pretty valid question for most of this series. Kerry, Clark, Ptonomy, and Syd end up in an elevator together, sharing more and more bizarre stories about the Admiral. Ptonomy and Kerry go to war on some Vermillions while David finds broken eggshells all over the place. Syd and Clark somehow make it to the Admiral’s room and make vague accusations and start hallucinating. Syd screams for Clark to kill the Admiral and then David shows a new power, apparently teleporting into the room and freezing them after changing Clark’s gun into a mop. Seriously. Some Vermillions bring in Ptonomy and accuse the group of being traitors, which David doesn’t agree with. Things turn even more horrific than normal when a version of the black, chick-like creature we’ve been seeing hatches out of Ptonomy’s back. The creature flees, and, after pulling smaller versions of it out of Syd and Clark’s heads and dealing with them, David pursues.

Kerry, with her hatchet, looks shaken when the monster comes down the hall at her, but she’s ready to fight it anyway. David pops up again and tells her it’s a bad idea, and she lets it go by. While the Vermillions do something radical to try and save Ptonomy, David actually tries to talk to the creature. Good for him, really. It isn’t interested, or maybe capable, of talking. David finally has to take drastic action and reminds it near the end that he would have let it go. Future Syd is somehow observing this from that strange room she’s usually in, as a very tired looking David sits down.

The show ends with a view of most of the Division sitting at a long table looking worn out and Ptonomy in strange new circumstances. Over this is another lecturing voiceover linking the various past lectures together, more or less saying insanity is contagious, people like patterns, and ideas can become monsters.

What I liked: While I’m not sure the main plot advanced any here, the subplot with the ugly black chick things seems to be over. David is manifesting new powers and seeming more and more like a possible rival for Farouk finally. Points for getting the witch trials right and the nod to comic book history.

What I didn’t: I’m tired of the preachy voiceovers, even if they are finally coming together to mean something. I don’t get at all how Farouk managed to go after future Syd. I could do with less beautiful images and more comprehensible plot. I don’t like what I think happened to Ptonomy.

It’s another weird episode of a weird series. I’ll give it a 3 out of 5.