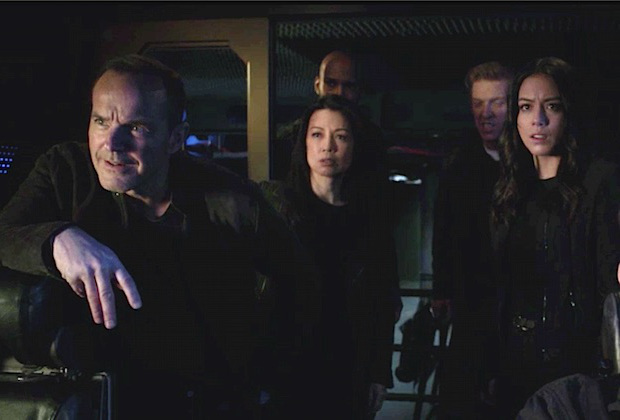 I’m not the only one seeing this, right?

The Agents of SHIELD open with a scene that, at first, seems to have little to do with anything going on right now. Werner von Strucker, who we haven’t seen since the mess with the returned Ward/HIVE composite, is in therapy after all the remarkably unpleasant things that happened to him. Not only does it not go well for him, his psychiatrist doesn’t have a great session either.

Back at the Lighthouse, Simmons and Mack are doing their best to care for Yo-Yo, and she’s clearly about sick of it. Having adapted to her situation better than the others, she even makes a joke about not having arms. The only person more sick of medical questions right now than Yo-Yo is Coulson, who everyone is worried about since the revelation of his death sentence of a diagnosis. Coulson and Yo-Yo compare amputation notes, and then she and Mack have a few sweet lines.

Out in the hall, Mack and Coulson argue about priorities. Mack wants to pretty much drop everything and get what they need to make prosthetics for Yo-Yo. Fitz and Coulson are worried about the still-extant rift in the lower levels, and what they need to do in order to keep it closed. Once again looping into their nasty alternate future, they need gravitonium. Daisy, ever the efficient multi-tasker, has a way to move on both. She’s researching Cybertech, which helped make Deathlok into the badass he is now, and also had some gravitonium. Deke wanders in to the briefing as Daisy finds a lead on where some of their scientists might be now. Coulson assigns Deke to help Fitz, which doesn’t please the SHIELD scientist.

Verner wakes up in new surroundings and is very confused. He wanders through mostly empty rooms before finding Ruby, General Hale’s psycho-killer daughter, but not getting the answers he wants. SHIELD goes out to find the mystery figure that is their only lead on Cybertech, and, after an initial exchange that’s not too friendly, we find out there’s a link between him and one of the team.

The new guy, who goes by Candyman, brings some unsettling news about some of the Hydra scientists. He’s also surprised about the changes his friend has been through since they knew each other. Deke pesters Fitz in a scene that has more resonance for us, knowing who Deke is, than for Fitz. The rift flares up again and Fitz sounds the alarm. Just another day at the office. Yo-Yo shows she isn’t as adapted as she’d like everyone including herself to think, and Simmons does her best to reassure her.

Coulson has a few options brought to him about ways to save him that touch on their past cases. Coulson isn’t interested, stating that one unnatural extension of his life was enough. Daisy and May agree to ignore him, which could have some unpleasant ramifications down the road. Then again, Coulson kind of did the same thing when he brought Daisy back against her will. Ruby and Werner get to know each other, and it’s not exactly the beginning of a beautiful friendship.

The Candyman manages to help the team find the scientist they need for their next clue. The good news/bad news scenario is that all the gravitonium he knows of was put on a freighter, the Principia… which sank in a thunderstorm and is something like five miles below the waves. Too bad SHIELD doesn’t have any contacts in Atlantis. While Fitz searches the area via the drones he enjoys so much, Deke is stunned by the fact that there’s five miles of water at all. He’s never seen an ocean in his future, after all. When Deke gets frustrated and storms off, Fitz and Simmons talk about being married and what to do with their names, among other things.

General Hale finally meets Verner, who insists on calling himself Alex. She has plans for him whether he likes it or not, and isn’t really that interested in his opinion. The discussion has a lot of twists and turns, and Alex is very confused by the end of it. Hale pulls Ruby aside to give her a few instructions.

Deke makes several discoveries as he roams around the impressively stocked supply areas. He falls in love with a snack most kids know, and then has another encounter with some more of the fear-shades the rift is producing. Deke does surprisingly well, gets a brief reunion with a departed loved one, and then, afterwards, talks to Simmons and gets a great idea about where the missing ship might be. Even Fitz is impressed.

In no time, the Zephyr takes them to one of the more unusual sights in recent memories as they find the ship. A surprised Candyman asks if they see stuff like this all the time, and gets a sort of bored, jaded answer from everyone. Meanwhile, Alex has some bad dreams, which lead into a chat with Ruby, who may not have the strong allegiance we thought she did. She makes him an offer and gives him time to think it over.

The team boards the ship in its new location. One of their newer recruits, Davis, is a pilot and helping with the Zephyr, but even he agrees May is a better pilot. Surveying the ship, they find several “super-mechs” as the things that accompanied Ruby when she maimed Yo-Yo are apparently called. They find what they need, if not exactly how they expected to find it, and manage to get it with guidance from Deke. They also, of course, end up fighting the super-mechs as they reactivate. Me, I’d have been dealing with those as I found them. Coulson, amusingly, calls them Hale’s Flying Monkeys. The team wins the fight, Candyman is awestruck by the whole adventure and agrees to help them more. Hale gets a heads up that SHIELD found the Principia, and isn’t happy about it.

As the show wraps up, Deke overhears something that freaks him out. The team is beginning to think there’s more to Hale than someone who inherited Ross’ position, which in part makes me wonder if he would have recovered by now on his own. Mack comes back from the mission bearing gifts for Yo-Yo. Ruby is making plans that might not go well for her “mother.”

What I liked: The mission to find the ship was interesting and fun. I’m glad they’re finally getting some help and more agents. Deke’s reaction to what he learned was priceless. Ruby and Verner/Alex make a fun, but dangerous, team. I wouldn’t mind if they took out Hale, I just can’t imagine that would be good for the Agents down the road. The Candyman and his friend were entertaining.

What I didn’t: The overall gloom and doom of the future they are trying to fight doesn’t fit the show as I usually think of it, and I’m not liking it. I am still hoping for cures for Coulson and Yo-Yo. Then again, we also still don’t know if the show has a future past this season, although Coulson himself will apparently be in the Captain Marvel movie.