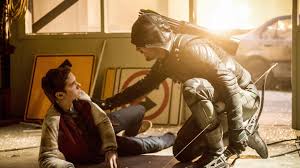 The very tense second half of Arrow’s season continues with “We Fall.” Cayden James is still running around the city with his mob of villains and thugs, the heroes are proving utterly ineffective at stopping him, or even inconveniencing him, and Team Arrow is still split in two factions. Someone needs to collectively slap some sense into all of them, but I don’t see any likely candidates on the horizon.

The opening scenes show various people in Star City going about their business. This much time with civilians is never a good thing, and that ends up being true here as well. As the scenes go on, we see that James has managed massive hacks throughout the city, and people are dying from their equipment turning against them, including a city councilman and Captain Pike, one of the better cops in the Star City Police Department.

At their apartment, William is beating Oliver at a game that’s particularly embarrassing for Oliver to lose. William gets in a line that makes Oliver feel horribly guilty. Felicity pops up and is helping William with a science project, and their technobabble amusingly leaves Oliver lost. William goes off to school, excited about a field trip, Flash backpack in hand, and then Oliver and Felicity get the reports about the deaths by tech.

Diggle is down in the bunker working out as Felicity arrives. She briefs him, and they both agree it must be Caden James. Hey, here’s a thought: if they’re up against a hacker that actually outclasses Felicity, and we saw recently they are on better terms now, how about bringing in her father, Noah AKA Calculator? They’re not exactly in a position to turn up their noses at any help at all. They agree to loop in their former allies, who still really need a name for their group. I support Curtis’ suggestion of Outsiders, and not just because I mentioned it before he did.

Speaking of the other team, they’re still collectively sulking and going on about matters of trust. Personally, I’m a bit curious where Rene’s daughter is if they’re all in this meeting. Oliver has a nanny for William, but Rene is unemployed, so we know he can’t afford that. They get a mysterious message via T-Sphere, and then Curtis and Rene bicker about saying “Suit up” as they get ready to deal with it.

While Thea and Oliver try to come up with a plan for keeping the citizens safe, the others creep around, trying to turn the ambush they suspect is coming against James and company. Black Canary is once again carrying a staff around, making her the most erratically armed character on the show, ranging from staff to handgun to her powers to just hand to hand. They get jamming interference on their coms (where did they get those? Stolen from Team Arrow when they left?) and then Mr. Terrific gets a surprise visitor with an even more surprising message. And since trust is such a big issue, he naturally keeps all this to himself. Perhaps they should be Team Hypocrisy?

Oliver is trying to deal with the complications and ramifications of the attacks throughout the city when he gets a visitor: Caden James himself under yet another alias. James has come by to mock, gloat, and make a ransom demand. Oliver isn’t happy about this, but James has taken precautions so he has to let the villain go. He does get a lead on James’ motivation for his villainy.

Felicity is down in the bunker and starting to despair. She realizes that she was set up during the attack on the Internet Vault, and blames herself for James being able to get into every system in the city. Oliver shares James’ clue with her, and they figure out that Oliver couldn’t have done what James thinks he did, but they don’t have a great way to prove it as yet. All of which makes me think someone else has aimed James at Oliver, so do we have yet another major villain lurking in the background?

The other team (I may well just start calling them Outsiders for convenience if they don’t pick a name) grouses about not being able to catch Vigilante. True to their major concern of being open and honest, Curtis continues to keep secrets and calls up Felicity to check on a few things they’ve learned. Naturally, the site of the next attack turns out to be where William’s school trip is going, although he might prefer that to the bullies he’s dealing with. Just in time to spring into action, we learn that Cisco has made a new Spartan suit for Diggle.

Black Canary pulls off a truly impressive stunt to save some people down in the subway, but I have a question about this scene. We were told a while back that Wild Dog and Spartan use some kind of special stun rounds in the guns, so they’re not actually running around killing people with their constant gunfire. Yet here, Wild Dog shoots open a few locks to get them to something they need. How’s that work? William shows he takes after his father as the trip, mysteriously without a chaperone, runs into trouble. Then Green Arrow shows up and William gets a surprise of his own.

With a few surprises out of the bag, they bring William to the Lair. Ok, he’s pissed off, but he’s a kid, so he can’t help but be impressed by at least some of it. Oliver tries to explain to William what’s going on as far as taking up the bow again, and then leaves for a meeting with Thea. The other group continues to sulk, but agrees talking to Felicity to share information is a good thing. Curtis finally comes clean about his own secret and they seem remarkably forgiving, given their obsession with trust. Dinah gets upset about something else and stalks off.

While Oliver, Thea, and Quentin try to deal with some problems with their shelter plan, Felicity continues her quest to see what set Caden James off in the first place, and gets some help from Elena, her Helix hacker buddy. Oliver gives a press conference, and Caden James once again claims to be several steps ahead. As if things aren’t tense enough, Felicity urges Oliver to go talk to William.

The other team settles their spat and they agree on a course of action. Felicity offers Oliver some insights on her own experiences with her father lying. The other team gets another warning and leaps into action. The teams unite to face the new threat, but Rene goes out of his way to remind them that nothing else has changed. I swear, at any given point I can’t tell who is being more childish, Rene or Dinah. William’s not really in the running. Felicity sort of narrates Green Arrow’s moves during the fight, and William realizes a few things, as well as seeing things he shouldn’t.

For wrap up scenes, Dinah meets with a source and has some very conflicting feelings about it. Oliver, Felicity, and William have a family meeting and they make some actual progress on some of their problems, which is nice. Later, Oliver goes to City Hall to talk with Thea and reaches a very hard decision. This is going to get really interesting in the future.

What I Liked: Curtis suggesting a name for their team is both something that would be useful for the fans and perfectly in character. The teams being at least mature enough to share intel is a step in the right direction. William is actually becoming a character, not just a plot point. Seeing Diggle back in action was great, and of course Cisco upgraded his gear. I do wonder if the “other team” not taking a name means this split won’t last too long. I hope not. Their potential source in James’ group makes a certain degree of sense to me. Felicity’s talk with William and the scene of them watching GA in action were both well done.

What I didn’t: Rene and Dinah are being petulant. Curtis had to know keeping something from them wouldn’t help, and there was no reason for him to in the first place. I’m getting a bit tired of “bad guy is just too smart and always ahead” on this show. I see why he did it, but not sure I agree with Oliver’s decision at the end.

I’m really not enjoying either the Caden James posse or the split team stories, but this was a decent enough episode. I’ll give it a low 3 out of 5.