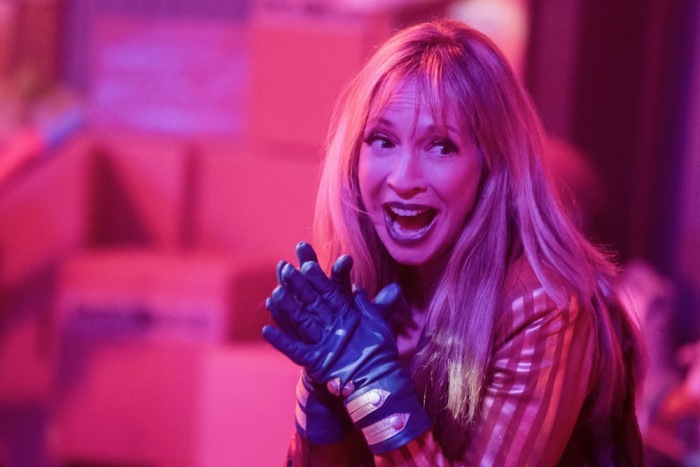 With Barry in jail and Kid-Flash “finding himself” in Blue Valley, Central City is running low on superhuman defenders. As the title suggests, its time for Ralph to step up and fill Barry’s boots. Can he do it? Well, that’s what we find out in “The Elongated Knight Rises.”

One thing I have greatly admired about this series is the way they give nods to the original Flash series back in the 80’s. They do this again this week when Corrine Bohrer reprises her role as Prank, the Trickster’s #1 fan/girlfriend. But we’ll get to Zoey Clark’s reappearance shortly.

Barry is settling in to his sentence in Iron Heights Prison. It’s been about a week for the Fastest Prisoner Alive, and he’s added his own message to that of his father’s. He refuses to use his powers to escape, but he’s not above helping out when a riot puts some guards in danger.

So how is the city handling the disappearance of the Flash? Well, they haven’t really noticed as far as I can tell. There’s a man with hostages in a local bank who wants to make sure the Flash doesn’t show up. As he makes a list of odder and odder demands, and Joe rolls his eyes, the hostages are taken to safety by a certain stretchable sleuth. Ralph manages to defeat the bad guy and give an interview to the press that doesn’t go all that well. When he hesitates at giving a name, they dub him Stretchy Man. As we see back at STAR, Ralph hates the name, and the team there are being kind of hard on him. He’s an egomaniac, sure, but he DID save the hostages and stop the bad guy. Joe and Cecile are working on an appeal for Barry’s case, and Cisco, missing his best friend, hasn’t worked his naming magic for Ralph. The unflappable Wells doesn’t seem to be much affected one way or the other.

In the prison yard, Barry paces around, watching the clock. He runs across Axel Walker, the second Trickster, who we saw in a special episode that featured the return of Mark Hamill a few years ago. After getting away from Axel, who is complaining about his pudding tasting wrong, Barry is in the midst of falling into a typical thugs bullying him scene. He gets saved by a guard bringing him inside for a visit.

Just like in the trial episode, when the writers didn’t know anything about how the courts work, they apparently are equally ignorant about prisons. Iris is visiting every day (doesn’t happen), the visit is like five minutes (they’re a lot longer), and they’re talking about his secret through the visitor phones (which are recorded). Later that night, Axel gets brought to the infirmary and broken out of prison by his mom, Zoey Clark, Prank from the original series.

Joe goes to Iron Heights to look into Walker’s escape. After talking with Warden Wolfe (who in the comics has some secrets that may or may not turn up on the show), Joe gets in a quick visit with Barry. Wolfe ID’s the “nurse” as Axel’s mom, and Joe goes back to STAR. After more Wells/Cisco bickering, Caitlin and Ralph go off to look for clues about where Alex might be.

Axel and Mom are hiding out at Clarx Toys, which I believe was used back on the first series as well. Axel really has some hero worship going on about his father, which Zoey isn’t very happy about. After some family discussion, Axel sees Ralph on the news and gets an idea about how to get his father’s attention.

Barry has another run in with the thugs from before, and gets saved by a huge prisoner called Big Sur. In the comics, that character is a huge man with high-tech armor and an amazingly low IQ. After Sur steps in and then walks off, the scene shifts to STAR. Just as the team is agreeing they have no leads, Axel, in his Trickster gear, has pirated the local tv station and is demanding Stretchy Man meet him. Ralph thinks it’s cool that he has his first supervillain challenge. Cisco breeches him there, and most of Axel’s gadgets don’t do anything to Ralph’s unusual body. Finally, the kid breaks out a hyper-acid that actually burns through Ralph’s costume and then Ralph’s leg. Ralph screams and falls, and then Cisco pops back to blast Trickster and get Ralph to safety. Why Cisco didn’t help as Vibe, I have no idea.

At STAR, Ralph is wounded, but not seriously damaged. It’s the first time he’s been hurt since he got his powers, and he’s freaking about it. They make a reference to Kryptonite he doesn’t get, and Wells, ever reassuring, says Ralph will “probably” heal.

Barry paces around the yard, and gets no help when he asks about his visit that is late. Big Sur, when asked, says he helped Barry because Barry’s father helped him. At Clarx, Mom is off her meds and helping her son. She even gets her old Prank costume out and is back in manic mode.

Joe comes back to STAR, and no one has had any luck tracking the new menaces. Since they have no meta-powers, STAR’s gadgets aren’t able to track them. More Wells snideness is interrupted when the tv kicks on again. The Prank/Trickster duo have hostages, and some of those annoying Beebo toys that were on Legends of Tomorrow a while back. Naturally, there is deathtrap involving the hostages and the “Axid” and a demand for Stretchy Man to come to them. Ralph panics. He has no interest in risking himself now that he knows he can be hurt, and doesn’t give in under the disappointment of the others.

Ralph uses his powers to break into Iron Heights. At first, he wants to break Barry out, but Barry won’t go. Barry gives Ralph some good advice and a pep talk, and Ralph leaves with a lot to think about. At STAR, the team makes plans to save the hostages without Ralph. They have a really amusing way to trigger Caitlin’s transformation to Killer Frost.

While Barry gets the background on what happened between Big Sur and his father (and the writers prove even more ignorant about how prisons work), Vibe and Killer Frost sneak in to Clarx Toys. After some great Killer Frost/Vibe banter, and the flying Beebo squad, those two manage to get themselves captured. This is about when Ralph gets to STAR, says he’ll go help, and gets a new costume.

Big Sur gets himself jumped and beat on by the thugs from earlier, and Barry finally decides he has to act. He manages to keep the use of his powers subtle, and saves the day. Wells is up on the roof, working to neutralize the Axid, while Iris frets that the others are running out of time. Ralph comes in for some awkward banter and showing off his new costume, which Prank likes. Then, he does something actually heroic, and is greatly helped out by Wells. Ralph goes on to defeat the bad guys, have another press conference, and finally get his comic book handle of Elongated Man mostly by mistake.

Barry and Big Sur have a bonding conversation, and then Iris visits. After she complains about not being able to touch him, he does something risky that they are amazingly lucky doesn’t get them caught. Ralph and Cisco have a weird scene at Jitters, which gets even weirder with the return of the caterer who was acting to oddly at Barry’s wedding. She goes back to her table after helping Cisco and Ralph, and we get a clue about what she might be up to, or at least where she might be from.

What I liked: I haven’t been happy with sleezy-Ralph, and I’m glad he’s acting more like a hero. The forced Killer Frost transformation was funny. It was fun to see Prank again, and I love they acknowledge the past show as much as they can. Now if they could just work in their Nightshade character…

What I didn’t: I don’t like the younger Trickster. I don’t like him in the comics, and he’s not that good here. The writers are consistently inaccurate with everything having to do with the criminal justice system. They need some classes. I don’t know why Vibe isn’t helping more, or why they don’t get Wally to come back and help.

It was a decent but not great episode. I’ll give it a 3.5 out of 5, mostly due to the nod to the first series, Prank coming back, and Ralph finally making progress on his heroic journey.