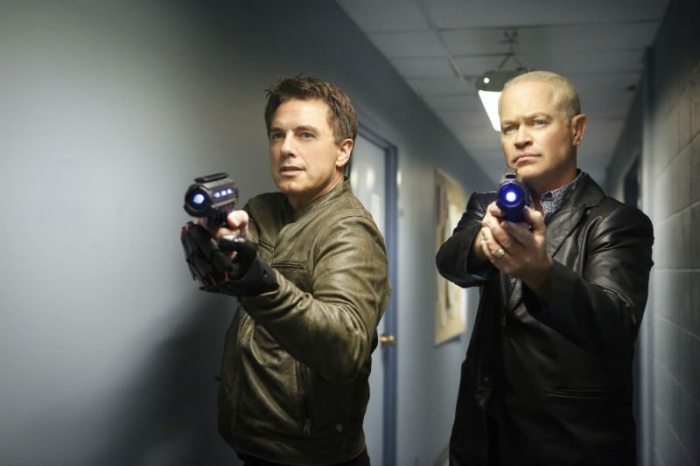 I like that on the opening of Legends of Tomorrow, they’ve been moving around who does the introductory voice-over. That makes sense with a team show. What really entertained me with this one is they had Damian Darhk do it. He’s not only one of the bad guys, but actor Neal McDonough’s delivery is fantastic.

The bad guys get a lot of attention this episode. The tensions between Eobard Thawne (Reverse Flash), Damian Darhk, and Malcolm Merlyn (the Dark Archer) are running high, and watching them bicker and scheme is some interesting drama, not to mention getting some good lines. It almost feels like the Legends are guest stars on their own show this week, but I really thought it worked.

They show us how Malcolm was recruited by the other villains, and right from the start, they aren’t getting along. The clash of egos and mistrust is probably going to end up being the Legends’ best hope of winning. Catching up to the present, the villains have Rip as their prisoner. Except he’s not quite Rip. He really is a different person now, so really can’t tell them what they want to know about the Spear of Destiny.

The Legends aren’t exactly a united front, either. They’re not sure what to do next. Rip is missing, they don’t know how to find the rest of the Spear, and they’re not sure how to use the medallion. They also end up questioning each others’ motives in trying to track down their enemies. Professor Stein suggests they go to Central City to check in with a “colleague” which ends up causing more tension.

Darhk and Malcolm are torturing Rip, but Rip is still stuck in his Phil persona. They get lucky when their torture turns up something useful anyway, and the two of them are off to plan a bank job in the Switzerland of the near future. They also are noticing that their ally, Thawne, keeps disappearing on them. What scares an evil speedster?

Since they really like reusing sets, the Legends end up at Flash’s favorite coffee shop, Jitters. His colleague ends up being his daughter, Lily, brilliant scientist and time aberration. They bring Lily back to the Waverider, which provokes an array of reactions from the crew.

A good bit of the rest of the episode veers back and forth between the bad guys’ bank robbery and the good guys arguing about what to do about both the Legion of Doom (a name Sara still hates) and Lily. There’s also a lot of uncertainty about the identity of the mystery speedster. Pooling their knowledge, the heroes know about several people with speed powers, but none of them fit for what little they know of their current foe.

Malcolm and Darhk actually come to blows over their differences, and get talked out of killing each other by Phil of all people. They eventually manage to not only get into the vault they needed, but they convince Thawne to tell them what’s going on with his constant disappearing acts.

The heroes figure out who Thawne is, but it doesn’t make a lot of sense to me. There were very few people around when Eddie killed himself on Flash, and Stein wasn’t one of them. It doesn’t seem like the kind of thing that would come up in conversation, so I’m not sure how he found out about it. Stein also has to deal with Lily finding out about her own history, which doesn’t go well.

By the end of the episode, both sides have made progress. The bad guys have ironed out at least some of their differences, which isn’t going to be good for the heroes. They also managed to get their prize from the vault. Lily and Stein manage to reconcile, even with her unusual history. The episode ends on a startling note when we see someone has gone through a lot of changes and apparently changed sides.

What I liked: Lily is a fun character. I liked her during the crossover, and she was entertaining here, too. The focus on the bad guys worked nicely this episode, and I liked seeing more about their alliance. Plus, Sara’s dislike of the Legion of Doom name is an amusing running gag.

What I didn’t: As I mentioned above, I’m not sure how Stein knows about Thawne. They could maybe have shortened the bank job segments, but that wasn’t bad.

I thought this was a fun episode. I’ll give it a high 3.5 out of 5. It’ll be interesting to see where they go next.