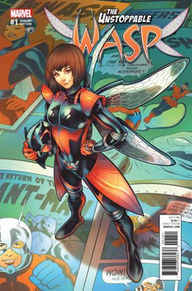 Marvel has been developing a lot of new characters lately, many of them females carrying their own books. I’m glad to see it, and even more glad to be enjoying it. The new Wasp showed up a while ago in one of the Avengers books, and wandered around as a background character briefly. Now, she gets her own title in “The Unstoppable Wasp.”

The book reminds me a bit of both the sadly cancelled Mockingbird, and the current Ms. Marvel books. I’m sure that feeling was helped along by both of those characters guest-starring. Ms. Marvel is helping Nadia (our heroine) get her citizenship straightened out. It’s a bit complicated since she’s the child of a founding Avenger, but she’s been raised in secret and seclusion until very recently. We get a recap of her life as she goes through the citizenship process, and she reduces her case worker to tears with the story.

This gets interrupted by a giant robot attack (hey, it’s the Marvel Universe Manhattan, what do you want?), and the two girls meet up with Mockingbird, who is already fighting the ‘bot. This leads to some amusing scenes between the three heroines and Monica Rappaccini, yet another mad scientist, one that Nadia has been a fan of (her work, not her evil). By the end of the fight (and the smoothie celebration afterward), Nadia has a new direction and new purpose, in addition to her beginning heroic career. The scenes with Wasp, Ms. Marvel, and Mockingbird together were great, especially since Ms. Marvel is such a child of her times and Wasp was raised in isolation so she keeps missing all the cultural references (a bit like Captain America in the Avengers movie).

Plot: I’ll give the writing a 4 out of 5. This really entertained me. Nadia is a great character, managing the difficult trick of being consistently upbeat without being annoying. The reactions with Ms. Marvel and Mockingbird were fantastic. The recap told to the citizenship worker was a good way of getting in her story.

Positives: Nadia is all positive. She’s actually fun, and I really hope her friendships with both Ms. Marvel and Mockingbird continue. Those three worked well together. The book is fun and makes me smile. Really, what else do you need?

Negatives: About the only negative I can think of is that we never get a good idea as to what happened with Nadia’s citizenship application. Also, since I only read some Marvel books, I have no idea why people think Hank Pym is dead (or if he is). That one bit of backstory wasn’t explained.

This was just plain a fun read. I enjoyed it a lot, and I’ll be back next issue, that’s for sure.