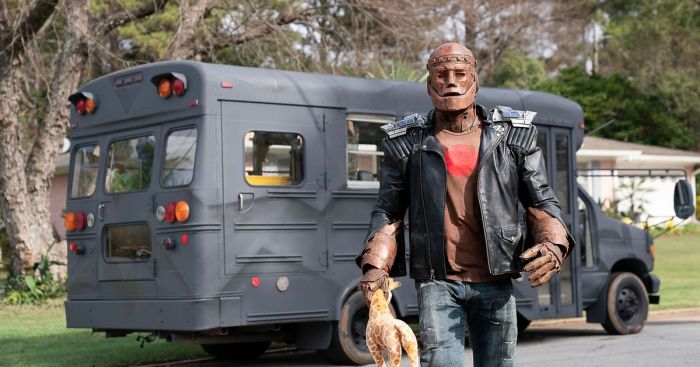 Things have been going worse than usual for the Doom Patrol, and that really says something. The group has never been more fragmented, and now they get a visit from one of Grant Morrison’s creations, which never goes well. The various members of the group are trying to get a handle on their lives, and they spend most of this episode split up. There’s a clash with a god-like being, a setback for someone’s recovery, and a few people having to face some ugly truths. “Pain Patrol” is aptly named.

We start off with an episode from a very young Niles Caulder’s life. It looks as though Niles was never a particularly good person, but his petty crimes get interrupted by a very unexpected visitation from a weird being (maybe Niles’ first) that’s the DC Universe’s version of a famous killer. After some truly odd special effects in this encounter, we return to the present where Dorothy is trying to be a good daughter for the Chief, and succeeding decently. Or the Chief is faking well, one of the two. Dorothy acknowledges the help she got, and Rita seems uncharacteristically low spirited. What could be a nice and sweet scene gets disrupted when Robotman shows up, being even more of a dick than usual. He used to be one of my favorite characters on the series, but I really don’t like his self-pity/rage mix this season. Chief calls him out on some of his behavior, and you know you’re doing well when Niles Caulder is actually right that he’s morally superior to you. This scene ends with Robotman and Jane taking off.

In the aftermath, Niles talks to Dorothy about the limits of apologies, with a cutting remark from Rita. His reassurances to his daughter get interrupted when the Chief gets a mysterious summons/ransom note. The Chief agrees to go, and fails in every way to be inspiring to Rita, who joins him despite her better judgement. The pair are transported via a unique method that Rita definitely doesn’t care for. Once again in the much-abused bus, Robotman and Jane go on a road trip, with an ongoing rant from Cliff about the Chief. It goes without saying in this group, but Cliff really has some issues he needs to work on. Jane is apparently asleep for Cliff’s tirade, but in fact she’s been dragged back to the Underground for a very unexpected meeting with her other selves. Cyborg goes to his own group meeting, but has a much better result.

Not at all having a good day is Larry, who has been captured and is going through a specially tailored torture. This triggers a flashback from 1966 about when Larry first came to Doom Manor and met Rita. Their friendship started early, and the Chief even did something to improve Larry’s quality of life. Then again, the Chief caused his problems, so… I guess that’s a wash. Rita and Larry do some early bonding. Back in the present, Dorothy gives herself and her “friends,” as well as Danny, a pep talk. While Dorothy is off to play games, Jane is going through a sort of personal hell. Cliff finally gets where he’s going on a very ill-thought out idea, almost talks himself out of it, then goes ahead and does a possibly right thing both for the wrong reason and in the worst way possible. He gets some exciting news, but hasn’t really set things up in a way that would let him enjoy it. Victor and Roni get to know each other a bit later, with some of the stereotype roles being reversed, and then some minor plans for the future.

Jane continues her own hellish meeting, and finds out that her feelings for the Patrol aren’t really shared by the other selves. It’s probably the nicest thing I’ve heard Jane say about the group. There’s definitely a lot of internal tension going on there. True to her earlier concern, Rita has ended up alone and tries to figure out what’s going on. Niles isn’t alone, but probably wishes he was. Red Jack, the captor and foe of the week, makes the Chief a surprising offer, and doesn’t take being turned down well. As Larry continues suffering in the present, we see more of the early days of his and Rita’s friendship. Robotman has an interesting, and fairly realistic, encounter with local law enforcement, and vents his anger in a not particularly productive way.

The inner clash continues, and Jane is hearing a lot of things she doesn’t want to. She gets presented with an ultimatum, and you can imagine how well that goes over. Dorothy’s game takes a tragic turn, although I really don’t understand how this happened. Red Jack has the Chief experience some of what the Patrol has suffered through, while Rita manages to find Larry. The Chief, Larry, and Rita all go through some unexpected and painful changes, which kicks off another flashback. In 1966, Rita and Larry watch some tv, talk about actresses and awards, and make a sort of pact. Under much less pleasant circumstances, Rita shows her training is paying off, as she risks a lot to help Larry get free. Niles shows he still has a few unexpected tricks up his sleeve as he deals with Red Jack, while Rita and Larry do some sabotage to the god-like being’s power source.

Back in the real, or more real, world, Cliff paces and curses under the watchful and bemused eye of the Panama City Police. Jane finally joins him there, listens to Cliff rant, gives him some sympathy, and then points out what he’s doing. Shaken, Cliff realizes his error. It’s a nice scene between them, but then Jane and Cliff have a very off-beat relationship. I’m not really clear on how Niles, Larry, and Rita got back to Doom Manor, but they made it, and a sobbing Dorothy shows Niles the results of her earlier mishap. Niles gives his daughter some decent advice. He goes about it in a horrific manner, but I do think Niles tries to be a good father.

The various wrap-ups are all downers. Victor gets a disappointment and then some news he has trouble handling. Larry tries to do something good for Rita, and she won’t listen. The Chief tries to fix Dorothy’s mistake, and then has a breakdown as he goes over the files of the various Doom Patrol members. Finally, he starts trying to make something better. In the final scene, Jane finds her circumstances have changed, and I can’t imagine that’s going to go well for her or the group.

What I liked: There were a few good scenes of some of this band of misfits trying to connect: Rita and Larry, Niles and Dorothy, Cliff and Jane. The Chief and Jane both did a great job calling Cliff out on what he was doing. The scene with the cops was well done and believable. Red Jack was terrifying and strange, as Grant Morrison characters tend to be.

What I didn’t: Cliff needs to get over himself and think about others a bit more. I don’t get what happened with Dorothy’s accident. I’m not enjoying what’s going on in the Underground. I really feel like at least someone in this mess should be able to catch a break. Even just a small one.

It was a good story, with some well-done writing and a few big surprises. I’ll give this one a 3.5 out of 5.