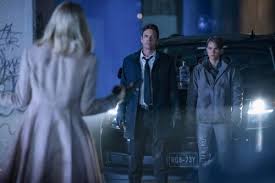 Kane Family Reunion, and they even have a bonding project

Last episode ended with something shocking- Kate Kane losing control completely and strangling August Cartwright, killing him. While the man was undoubtedly evil, that’s a line that the Bat-clan isn’t supposed to cross. Bruce Wayne wouldn’t be happy, wherever he is (is that ever going to get looked into? Batwoman’s been active a while now, and no one has thought “Hey, I should look into what happened to the Dark Knight?”). Now that she’s apparently crossed to the dark side, the madness continues for the Kane family in “Through The Looking-Glass.”

To start things off and set the right note, Alice babbles happy about the family being brought back together as Jacob digs a grave for Cartwright’s body, and Kate just sits there stunned. After some barbs back and forth, Alice takes over digging, while Jacob essentially tells Kate that Cartwright deserved it and she shouldn’t feel so bad. There’s some discussion about finding Mouse and what happens later, and then Alice makes her getaway, in part through Jacob’s inattention. Kate’s also distracted by seeing the signal lighting up the sky, although I’m not clear on who is using it. The Crows don’t trust her, and we learned the police chief was anti-gay enough to not ask for her help since she came out. Regardless, Batwoman goes after some thugs who were doing… something or other, and her control slips again. I’m not sure that this scene really added anything to the story, aside from the seemingly obligatory bit of Kate in costume and showing how rattled she is. Continuing to make great decisions, she pulls off her helmet/mask/wig right there on the street. The CW characters really, collectively, aren’t great at the secret identity concept. In their only scene together in the episode, Kate lies to Luke, who then gets distracted by some disturbing news of his own via a call from his mother.

Looking for her lost Mouse, Alice returns to their headquarters, finding a very different kind of chaos than she usually enjoys, and a threatening note signed “friend from Coryana.” There is a Coryana in the Batwoman mythos, an island in the Mediterranean, It’s usually tied a lot more closely to Kate than Alice, though. Possibly heaving a sigh of relief to be away from his daughters for a bit (he’s had a rough night), Jacob Kane brings Sophie back to the Crows to look into the troubling evidence he’s finding surrounding the death of Lucius Fox and the conviction of Reggie Harris, the man who supposedly killed Luke’s father and crossed paths with Jacob while he was in for murdering his wife. Sophie makes a few barbed comments before accepting her assignment, and I don’t blame her. Sophie sets off to look for a witness from the events of that night, while Alice pays a call on Kate. They argue about Mouse, and Kate’s having problems about her lack of guilt and some bad memories from meeting the “other” Bruce during Crisis. Alice and Kate strike an uneasy deal which gives each of them something they want.

The not-exactly dynamic duo follow up some leads, going to the home of a retired Arkham nurse. Kate and Alice have different approaches and some differing ideas on food. They discuss fear toxin and clothing sizes. The nurse, at least, seems to have some fond memories of Mouse. A very edgy Luke goes to the hearing for Reggie Harris, and Mary shows up, being remarkably nice to him. The judge rules in Harris’ favor, upsetting Luke and worrying Mary. Sophie’s hunt for her witness goes sideways, encountering a corpse, sniper fire, and an ex of Kate’s. We’ve met her before, and she gets wounded while saving Sophie and bringing her some news. Alice and Kate banter about brownies, interrupted when Mouse shows up. There’s an ambush, a surprise reversal, and a hurried escape.

She has her many flaws and issues, but Alice clearly cares for Mouse, and is touchingly worried about him. The villain coerces Kate into helping her with what’s practically a rite of passage for Gotham villains- breaking out of Arkham. Of course, they have to get IN first. They disagree a lot as Mouse is put through the wringer. The sisters’ agreement gets violent, and we see Kate seems to be stuck in a rut with fighting moves. Finally, Kate agrees to accompany the deranged Alice, after getting an important concession from her. In the courtroom, Luke and Mary get even more bad news.

Laying on the floor after their fight, Kate and Alice talk about monsters and books. They have some actual sincere bonding, and it’s really clear they care for each other, even if they can’t quite manage to see the world in the same way. The Kane girls come up with a plan and a distraction and set things in motion. Sophie and her new friend go to Mary’s clinic, and the doctor-in-training discovers them in what appears to be a compromising position at first. Mary gets in another couple of good lines, and Sophie gives them both a general update on what’s going on. In a bad but understandable move, Luke goes to confront Reggie. The conversation takes a few surprising turns before a very dramatic ending.

In a recurring issue that bugs me on these shows, and I mentioned earlier, both Alice and Kate take their masks off several times for no good reason during their mission. Alice goes to confront Dr. Butler, yet another sadistic and crooked Director of Arkham. I swear, anyone who gets that job should just have a cell prepared for them. Alice amazingly keeps her word, and Kate gets to work off some frustrations with a whole lot of fighting. Kate is brutal during the fight, and even makes use of Alice’s signature weapon at one point. The mission ends with a lot of surprises and a few reunions that are unexpected. I genuinely did not see this coming. It’s a heartbreaking point in the story of the Kanes.

Later, Kate and Jacob talk about their fraught history with Alice and the rough time Kate just went through. Jacob has also taken a few smart precautions. They end on a warm note, which is a nice change. Back at her clinic, Mary comforts a shell-shocked Luke after his own rough night. They talk over what’s happened and come to an unsettling realization. Sophie and her new friend hide out after their misadventures, and Sophie calls Jacob. He’s not happy about how she reaches out, and is even more concerned when she gives him more details. The violent tendencies of the night catch up with Jacob, and he barely escapes, although he doesn’t get what he wanted at the end of the encounter. Kate gets a visitor who was actually looking for someone else, but is concerned about what they find. That scene ends with a questionable decision by both involved. The final scene shows some of the new arrangements in Arkham.

What I liked: There’s a very interesting conspiracy rearing its ugly head in Gotham, and I’m so glad that Alice is NOT part of it for once. I’m really enjoying the time Mary and Luke are spending together. Mary is continuing to impress me every episode. The end of this one was a shocker that they did really, really well. The new pairing of Sophie and her ally is intriguing. It was nice seeing the Kanes more or less on the same page.

What I didn’t: I really can’t imagine why anyone, in any world, works at Arkham Asylum. I’d really like a hint about whether what happened with Alice’s gang is related to the ongoing mess around Gotham in this episode.

This was a really well-done episode. I’m very interested in the changes they made to several status quos. I’m giving this a 4 out of 5.