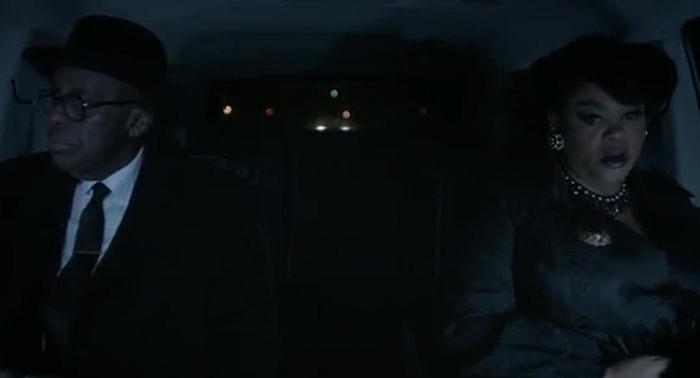 This is NOT a rideshare I want to be part of

The threat of the Markovians has been lurking for quite a while now on Black Lightning. Things are much more in the open now, and matters are coming to a head. We deal with invasion, unexpected domestic developments, some genealogy that doesn’t quite work, and a looming battle in “The Book of War: Chapter Two: Freedom Ain’t Free.”

The episode opens with more of Gravedigger’s background and World War II exploits. He narrates his own story, talking about his fraught past with America, the war, and what he’s getting ready to do. His peculiar moral code helps account for his codename, and he’s utterly convinced of the rightness of his cause as he sets his sights on Freeland. This doesn’t seem like it’s going to be good for anyone. Working away in the lab, Lynn and Dr. Jace compare notes on what they’ve been able to learn about Gravedigger’s genetics. Lynn makes a serious miscalculation, and, when Jace corrects her, things start sounding a lot worse.

Down in the Grotto, Gambi gives Jefferson a briefing on what to expect when Gravedigger arrives. None of it is good news, and Jefferson has somehow been through all that he has and managed to remain surprisingly naïve. Gambi provides some perspective and we learn what the stakes of the coming fight might be. Wandering the streets of Freeland, Khalil has a run-in with a Markovian squad. His initial fight goes badly, but then we see the expected change as he and Painkiller discuss things in the hallway/construct in his mind. Once he gets loose, Painkiller dispatches the enemy soldiers with ease and makes some ominous statements to Khalil.

Jefferson gathers the metas he can count on for a talk about what’s coming. He gets resistance from Jennifer, who isn’t happy with her place in his plans, and Brandon, who has his own agenda and doesn’t give a damn about anyone, or anything, else. World-building breaks down a little here: if the situation is this desperate, it makes no sense at all to not send out a call for help to the Scarlet Speedster and/or the Girl of Steel. I wonder at times if the show’s writers have gotten used to the idea of the unified world yet. In the wake of this split in the ranks among Jefferson’s people, Gravedigger’s next little speech/demonstration of power is even more troubling.

Trying to deal with new developments, Jefferson and Gambi adjust their strategy. Gambi is worried about the coming fight, and wonders if Jefferson is more concerned than he’s letting on. As they discuss Gravedigger’s aims and motivations, Jennifer reveals she’s been listening in, and once again expresses her displeasure with the battleplan. After she sulks off, Gambi makes some insightful comments and Jefferson dodges them to go work another part of the plan.

The depths of their desperation become apparent when Black Lightning and Thunder show up to try and get help from Lala. That goes about as well as you’d expect. The thug can’t see past his own immediate concerns, and figures the bigger picture is for other people. No one is happy with the meeting. Things continue to get worse as Brandon goes ahead with his plan, not caring about what else is going on. Selfishness seems to be breaking out all over Freeland.

In something a lot less fun than Carpool Karaoke, there’s a gathering of bad guys as Odell and Eve go for a drive/talk. She has some demands, and he’s not interested. At least at first. As she reveals more of what she’s learned, he grudgingly expresses some interest. The deal that’s offered bodes ill for our heroes and their secret location. While Lynn makes a surprising discovery in her lab, Grace and Anissa spend some time together in Anissa’s loft. The shapeshifter has not adjusted to her new lifestyle, and then demonstrates a new power that’s more in line with her comic book version. Anissa offers a theory which makes sense in the bounds of superhero science, at least. Feeling like she has to share the new developments quickly, Lynn goes home and gives Jefferson some really surprising news that shakes our hero. It also doesn’t really make sense, but that’s tied up in a spoiler I’m trying to avoid. To counterbalance this, Grace and Anissa spend some quality time together and Anissa does something unexpected.

Erika and TC have a conversation that touches on the uncertainty of tomorrow’s battle, things they haven’t done, and some more typical teen behavior. It’s an entertaining little scene until Jennifer shows up and makes a request of TC. After some debate about how aggressive Jennifer is, the scene ends with a text from Anissa inviting Jennifer over. In some place that’s never really identified, Khalil’s body relaxes while he and Painkiller have another argument that upgrades to a fight. Painkiller manages to turn some elements of the environment against Khalil, and there’s a new problem developing for the Pierce clan.

Stunned by Lynn’s earlier news, Jefferson sits at his desk and drinks. She comes in to discuss another worry about the coming fight and some of Jefferson’s attitude. The man is not having a good night, but she makes some good points, then suggests he gets changed for their dinner at Anissa’s, which she randomly invites TC, Erika, and Brandon along to. In the gathering at Anissa’s loft, no one seems to notice Brandon’s absence. In fairness, there’s a lot of people in there and then a surprising announcement, followed by an even more surprising timetable. There are some clearly mixed reactions to the news.

Eve is certainly busy tonight as she meets up with Lala. He has one of her employees as a bargaining chip, and she’s not happy about it. They have their own negotiations about Lala’s ongoing obsession. At the party, Lynn pulls Anissa aside for a mother/daughter talk. Anissa deals with some of her mother’s worries while Grace has an enjoyable little scene with Jefferson and Jennifer. Jennifer excuses herself to follow up on her own agenda that she’s been working on. At his place, Brandon takes another step towards full supervillainy.

In an ominous display, Gravedigger carefully studies footage of the metas that went to rescue Lynn. He seems to already have a disturbing amount of information about them. It’s an odd reversal when Gambi is being the workaholic and Jefferson encourages him to relax and enjoy the evening. TC tries to stop someone from doing something he’s worried about, but it doesn’t work. Grand superhero tradition is observed when what should be a very happy moment gets interrupted by an emergency alert, a desperate scramble, and the discovery that someone’s missing (but they still don’t either notice or care that Brandon’s not there). As the heroes spring into badly-timed action, Lala works a source for some information about his goal.

On her own, way too cocky, and thinking she can handle it all—in other words, a teenager—Lightning goes to try and take matters into her own hands. It goes very badly for her and Freeland both. It’s an odd scene with a few things that don’t quite make sense, but it sets up for a major confrontation next time as the episode ends on a cliffhanger.

What I liked: I enjoyed Erika and TC’s little moment, and the scene at Anissa’s place was great while it lasted. Jefferson is doing his best to save the city, and is determined to get the job done. Gambi is insightful and calls him on some of the things he isn’t saying. I get why Jennifer tries to go do what she did, and it’s at least in character.

What I didn’t: Poor Inspector/Chief Henderson isn’t getting much screen time this season. I’m disappointed in Brandon. I have no idea what Black Lightning and Thunder thought they’d accomplish at Lala’s. Were they really expecting anything different? Part of Lynn’s big discovery doesn’t make any real sense; nor did some of Gambi’s confusion near the end of the episode. If things are this bad, they need to at least explain why they aren’t asking for help from any of their new allies.

Next time promises to be a real epic showdown. I’ll give this one a high 3.5 out of 5.