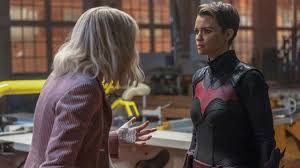 The Crisis is over, the winter hiatus has come to an end, and the CW DC shows are back. While it’s often simply an overused, hyperbolic phrase, in this case it’s true: after the Crisis, things will never be the same. The first stop for the shows’ various returns is Gotham City, where Batwoman’s episode has an interesting title: “How Queer Everything Is Today!”

The show opens in the Gotham subway (and what a horror show that place must be), as a train gets hacked and passengers put in danger. Fortunately, Batwoman is out testing her new bike, and, amid banter with Luke about her upcoming birthday, manages to use some gadgets to stop the train. It’s barely believable when the Batmobile does something like that, but with a bike? I don’t buy it. Batwoman isn’t watching her back, damn near gets killed by some aftermath. She gets saved at the list minute by GCPD Officer Slam Bradley. In the comics, Bradley first appeared before either Superman or Batman, and has appeared off and on since the 30’s as a PI that interacted with various Gotham characters, and Superman on occasion. They end up in the classic landed-on-each other pose, and the tabloids and social media go nuts.

Vesper Fairchild provides more voiceover, talking about needing a lift after the death of Oliver Queen (nice tie-in), and latches on to shipping the pair of them. Kate is less then pleased, pointing out she’s “very gay,” but Luke says that Batwoman gives off “straight vibes” and this will really help protect her secret identity. Bruce would be proud. Bradley is compared to both Chris Evans and Captain America, so I guess the Marvel movies are a thing on Earth-Prime. Luke comments that all the social media crowd want is to see Batwoman happy, and Kate walks off muttering, “Too bad, she’s not.”

At Katherine Hamilton’s grave (remember that from before the break?), Alice has another of her tea parties, and isn’t exactly respectful of the dead. Mouse is clearly reluctantly with her, and points out some flaws in her… well, more of a daydream than a plan. Mary deals with backlash from the revelations about her parents and the fickleness of social media. Trying to mend fences, Kate stops by, but Mary isn’t really ready to forgive, and slams her step-sister mercilessly before essentially throwing her out.

Investigating the subway problem earlier, Luke mentions “the Scarecrow incident” which might be a nod to Batman Begins, as he and Kate somehow have access to the crime scene with no one wondering why. She takes a low-tech but successful approach to finding clues, impressing Luke in spite of himself. The villain, dubbed “The Terrier” for the av they use, hacks phones all over the city for a fairly brilliant crowd-sourced ransom. In jail, Jacob Kane is not having a good time and really, really shouldn’t be in general population. Oddly, the thug threatening him uses a lot of dog imagery, which I thought was a clue about the Terrier, but proved to be unrelated, making it a puzzling choice by the writers.

Mary and Jacob talk later by phone, and the poor girl is clearly frustrated and at wits’ end. Jacob offers some advice she doesn’t want to hear, which happens a lot this episode. Continuing the pop-culture references, Batwoman talks about a place giving off “Mr. Robot” vibes as she tries to track down the hacker, and finds out Luke has shut down the coms out of an abundance of caution. The Crows have beaten her there, and Sophie is not dealing with her various stresses well. The two end up having a conversation that’s mixed humor and shared stress. To continue the bad time she’s having, Mary tries to get some help from an expert and gets shut down.

Returning to the City Cave (I still want to see Wayne Manor and the main Batcave on this show and this Earth), Kate isn’t pleased about the new radio silence. Luke explains, again, why he’s being so careful, and Kate worries about the lies around Batwoman. Luke reassures her that she’s a hero, and reveals a new clue about the hacker. His clue has a clue in it (yes, I know how that sounds), and Kate needs to return to her old stomping grounds: Gotham Prep (which might be a reference to the short-lived Gotham Academy title a few years ago). Sophie and Mary catch each other up, and Mary makes a surprising sighting.

Following up on the new lead, Batwoman crashes a party at Gotham Prep, and makes quite an impression, although not necessarily the one she wants. Finding the hacker, she gets a series of surprises about what they have in common. The hacker, while clearly having been through a lot, is remarkably self-involved, even for that age. While the Crows follow up a false lead, Alice makes a great first impression on someone and does remarkably, if unbelievably, well in a one-on-one fight with Batwoman.

What happens next is, in my opinion, not only the worst and weakest scene of not only the episode, but the series. Alice gets a hostage, and, despite the fact that Batwoman has a clear shot with any of her many weapons, she reveals her identity. The only reason this doesn’t go catastrophically badly and end up with the same bad dynamic late Arrow did is that the masked hero gets a lot of help from a surprising source. Elsewhere, Mary wallows in grief and depression and does something I found shocking, while Sophie gives her more advice the young woman won’t listen to. The Alice/Batwoman/hostage scene gets really weird, and we learn Alice’s latest obsession. I can sorta follow the madwoman’s twisted logic, but I don’t see it working. There are slick deceptions, explosions, rescues, a capture, and another appearance by Slam Bradley.

There are a series of good wrap-up scenes. Kate gets a visit in her office from someone she was dealing with earlier, and there’s an arguably light punishment for some early offenses. I was happy the one episode it seemed like they were going to do something with Kate’s cover story career, but that seems to have fallen by the wayside again. Kate gives her visitor a decent attempt at a pep-talk, especially from one of the Bats. Alice isn’t having a great time, but is where she should be. Sophie has some complications at work, and finds out her newest task isn’t going to go well. Kate and Luke have a good bonding scene with some decent banter and a nice gesture by Luke.

Taking full advantage of the new world the shows are based in, Batwoman makes the cover of CatCo magazine in an interview with Kara Danvers, making something public that touches on some issues that have come up several times this episode. To her surprise, Luke supports her on this. Under some voiceover about the masks people wear, Kate visits Mary again and this one goes better. Our hero checks in on her father, who is still having problems where he is, but seems to be ignoring them. Finally, she returns to her office for a truly shocking ending that, I suspect, is another ripple from Crisis.

What I liked: Most of the episode, really. Alice is amusingly twisted and fun to watch. Batwoman got several good scenes and moves. I liked her scenes with the hostage and the last one with Luke. Her moral concerns speak well of her, although I agree with Luke’s assessment some things would make keeping her identity secret easier. I liked the nods to Oliver and Kara. I really want to see what that final reveal means. I wonder if the new person she’s been dealing with is on her way to being this world’s version of Flamebird.

What I didn’t: The stunt with the bike didn’t really play for me. The scene with the forced unmasking just didn’t make sense

It was a good episode, kept from being great by those two scenes above. I’ll give it a 3 out of 5.