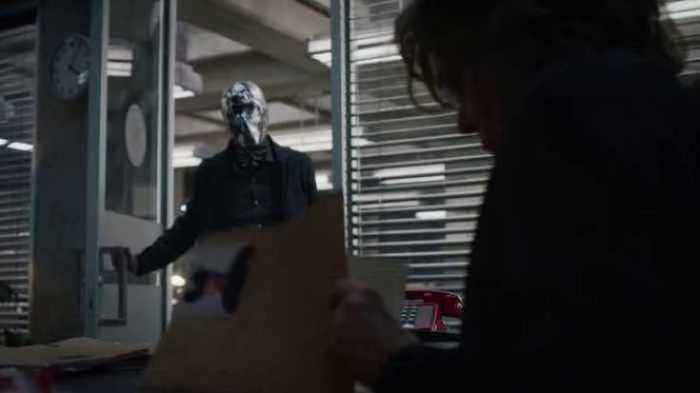 There have been several new characters introduced in this series that I’ve liked. Wade Tillman, the masked cop Looking Glass, is one of the most interesting. I admit to some bias, as he’s apparently loosely based on the Question/Rorschach, the Question being a favorite of mine, and his southern delivery with a keen mind behind it reminds me a lot of Eugene from The Walking Dead, another show I very much enjoy. This episode focuses mostly on Looking Glass, and the title comes from a Jules Verne quote, another favorite of mine. “Little Fear of Lightning” is from the longer quote, “If there were no thunder, men would have little fear of lightning.”

The title this week comes across like an old radio dial, trying to tune in a station. The episode opens in Hoboken, New Jersey, on the fateful day in 1985 when Ozymandias’ plot came to fruition. After we see young Wade coming from a background many would consider strange, and then going through a truly traumatic experience, he then gets caught in the “psychic blastwave,” and is one of the survivors anywhere close to the giant squid manifestation that killed so many in New York City and the surroundings.

Most of the masked cops have cover jobs, although how that works with payroll and benefits, I’m not sure. Wade’s job, fitting for a keen observer of behavior, is to observe focus groups from a hidden room and tell the ad agencies what they actually mean versus what they say. The first campaign we see him comment on is one he has a history with. Later, he goes home, changes, and goes to his police job. Agent Blake, in her usual annoying way, has taken charge of the Tulsa Police and is directing them to take a new approach to trying to find the Seventh Kalvary. Looking Glass has a disagreement with Red Scare over evidence handling, and then Sister Night presses him about the favor she asked. Blake, who keeps referring to him as Mirror Guy, calls him in to her office and then reveals yet another thing that won’t endear her to the local cops. She reviews his history with him, then tries to get him to tell her what he and Night are working on. Looking Glass stands by his friend and coworker.

His domestic life is kind of sad. He sorts the mail, has a beyond stereotypical bachelor dinner, shows some odd viewing habits, and then gets interrupted by a drill from his alarm system. It quickly becomes apparent the system isn’t working right, and he resorts to “percussive maintenance.” Later, he has a very unsatisfactory experience with the help line about his system, and we get a few more indications that Wade isn’t what most would call normal. The next day, he leaves the focus group to respond to a text, and we meet his ex. She’s an intelligent, insightful woman, and completes Night’s favor, as well as expressing some concern for Wade. The contents of a pill bottle, as well as Wade’s past trauma, get discussed. That night, he goes to some kind of group that seems like it’s halfway between AA and a support group; it’s focus is on the aftereffects of the event back in 1985.

A woman catches his eye in the group, who says a few odd things to him after, and then they drive to a bar. They have drinks, a lot of conversation, he demonstrates his uncanny ability to spot a lie, and then she finally leaves. Her ride strikes a chord with Wade, and he goes from slightly drunk Wade to focused Looking Glass very quickly. He makes a call and follows his new friend, making some disturbing discoveries as he goes. The place they end up is very strange, and, of course, a set up. Wade isn’t actually harmed, but is captured and brought to watch a video by a surprising “host.” The video is shocking to him and utterly changes his perspective on life. Wade hears a lot he doesn’t want to and isn’t ready for, and is presented with a choice between two horrible things.

There’s a nicely done transition taking them from Wade’s predicament to Veidt’s ongoing scheme. The genius has made his preparations and is launched into his escape attempt. He pierces the barrier we’ve seen hinted at, and where he ends up is someplace I wouldn’t have expected. Pragmatic and ruthless as ever, Veidt takes steps to try and ensure his rescue before being pulled back to where he was. His return isn’t pleasant, as the mysterious Gamekeeper takes him to task for violating the rules, and vents his displeasure on the former hero.

Wade does another focus group job, and is suffering multiple flashbacks to the event in New York. In this world, they call it 11/2 the same way ours has 9/11. He ignores an odd conversation between Red Scare and Panda, going back to his desk. When Sister Night starts pushing again, he makes a decision, gives her some answers, and lures her into a trap. Well, more like lets her walk into one. There’s a lot of confusion and Night does something desperate as she’s about to be taken away. That night, he goes home and deals with a new delivery in an indecisive manner. Just after he goes inside, others arrive and things look bad for Wade. It’s a nasty cliffhanger to end on.

What I liked: I’m really enjoying the Wade/Looking Glass character, and this let us learn more about him. He clearly has a lot of issues, but from what we’ve seen, I’m impressed that they’re not worse. The world building here is really well done, and I like the additions. I’m very much hoping that final scene wasn’t Wade’s actual final scene.

What I didn’t: I didn’t like his betraying Night, and I’m not entirely sure I understand why he did it. I was disappointed to see who was behind this section of the 7th Kavalry, and I’m really unclear on what their goals are now. I feel really bad for Wade from almost everything we saw here.

Another good chapter of a gripping story. I’ll give this one a high 3.5 out of 5.