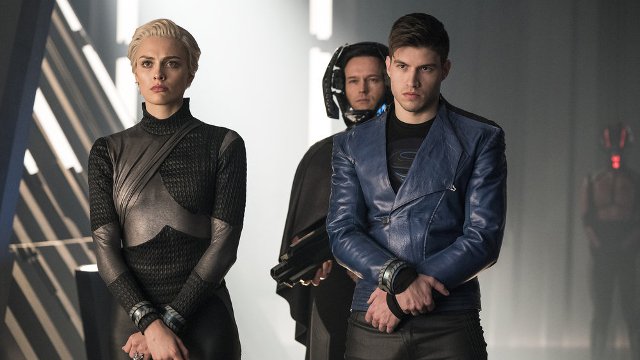 Nyssa, you didn’t tell me it was that kind of party

The writers on Krypton got really clever with this episode. There were some great twists and turns along the way that I did not see coming. I’ll do what I can to avoid spoilers, but I’m not sure how well that will go for this one. They do bring back something that originated in the comics, crossed to the DC Animated Universe, and now makes its second appearance on a live action show. They do some fine writing in “Mercy.”

The episode opens with what seems to be a flashback of Lyta and Seg wandering the Rankless district and making up stories about the people they see. There are dreams for the future, jokes about Lyta’s mother Jayna, and then things start going down a path that is not part of any past we know of. Clearly, something is different here. In the present, Seg is obsessively scanning for the departed Brainiac, who took his and Nyssa’s son on his way out. They go over options and state how they’re going to never give up the search for young Jor-El when they hear something. Seg has his weapon out, but the new arrivals are Jayna and Dev, and there are a few moments of confusion on everyone’s part.

Lis-Ser is hard at work on Doomsday, who Zod wants as his secret weapon. Lis is also worried about Brainiac’s abrupt departure, but Zod doesn’t care, and just keeps threatening her about succeeding with Doomsday. When she runs over the problems with conditioning something that’s immune to everything on the planet, Zod comes up with an interesting solution. His explanation also reveals a surprise that, I have to admit, I did not see coming.

In the weird other reality, Jayna and Lyta talk about the big upcoming day, and how happy they are. The real Jayna commiserates with Seg and Nyssa over what happened, and Dev brings all sorts of bad news. Seg gets more and more worried about the people that are dearest to him, and they try and plan out something to stop this chaos from happening. The initial attempt is only partially successful, and some of our heroes get captured. Zod continues his self-justifications and tells Lis to ignore the various dangers in the course of action he’s suggesting.

The fantasy world starts showing that something is amiss when the Oracle speaks about the future of Lyta and Seg’s child, and there are some recurring glitches in the surroundings. The dream world is becoming more of a nightmare as things keep taking dark turns and familiar characters say some terrible things. Lis and Zod go over the details of his latest brilliant plan, and a way out is set up in dialogue. Zod continues playing the threatening dictator, who wants the results he wants no matter what may be the inconvenient reality. Zod gets some news and goes to attend to the new development. After he goes, a prisoner makes an unexpected escape.

Seg and Nyssa get in some great lines, mocking their guards and giving some great deliveries. They are brought to Zod, who goes on about how suspicious he is of it just being the two of them. Seg and Zod argue about Lyta’s death, Val’s actions, and dealing with terrorists. The conversation goes downhill, and Seg shows that, while he’s thought of some things, he hasn’t thought of everything. Jayna and Dev get into trouble, and get a miraculous rescue that shocks them. There’s a lot of confusion and concern about what’s happening, and Dev-Em is more than willing to look a gift horse in the mouth. There’s a flashback to explain some of what happened that we didn’t see, which is mostly Zod being a dick, but that’s nothing new.

Seg and Nyssa are in a very special holding cell, and not coming up with any great ways to get out. Dev-Em shows up and uses some of the changes he’s been through to very positive effect. Eventually, everyone not on Wegthor is reunited, and there are a lot of mixed emotions about it. The show ends with Zod slipping further into supervillain mode and threatening to kill a lot of Kryptonians. You know, the ones he kept saying should be preserved at all costs after what he’s seen in the future?

What I liked: There was some clever writing here, and they used some things from the Superman mythos really well. They did a great job keeping us guessing. I don’t blame Dev-Em for being dubious, or Nyssa for not being thrilled as things are revealed.

What I didn’t: I’m honestly getting a bit sick of Zod. He’s one-note, megalomaniacal, and just not that interesting to me. I feel bad for Nyssa. They’re missing a bet with the fleet that they really need to start taking into consideration.

This ended up being a shorter than normal review for a better than normal episode. That was to avoid as many spoilers as I could. I’ll give this one a high 3.5 out of 5. As far as I know, there are only two episodes left in the season, and there’s been no formal announcement about a third season as yet.