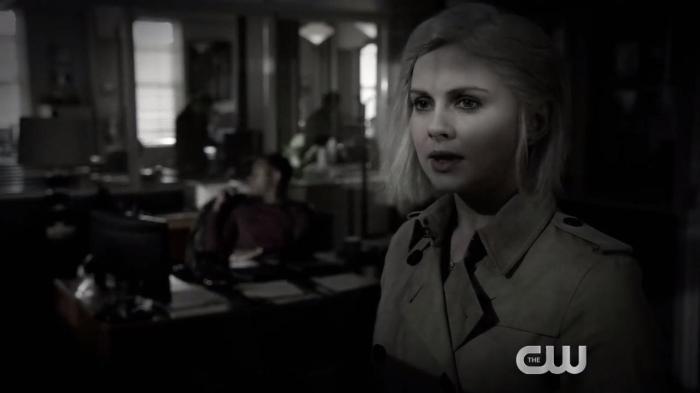 She was a pale dame with red eyes…

The final season of iZombie is heading for the end, as tensions rise, factions dig in, and more cast members check out before the end. The murder of the week is more center stage than many of the episodes this season, but the looming threat to the city is still out there. Another mole gets flushed out and there’s all kinds of brain chaos this week, as Liv and company go full noir in “Night and the Zombie City.”

The episode starts out of town, as the Joint Chiefs of Staff watch the footage of the zombie rampage at the pie festival. Mills, as usual, wants to put them all down, but the chairwoman (who as far as I know, never gets a name) tells everyone to put in suggestions. What I’m really wondering, as Mills glares at the screen: does he know that’s his daughter? Would he care if he did?

Liv and Ravi talk about the chaos at the pie festival, and agree it would have been worse if Major hadn’t been there. This leads to Ravi awkwardly telling Liv about the big discovery as far as who Beanpole Bob actually is. Liv goes and confronts the man, getting a lot of useless answers and excuses. I’m willing to bet this never even occurred to her as a possibility if she ever found out who was behind the tainted Utopium that led to her becoming a zombie. Liv storms off in a righteous and wholly understandable huff. I think that bridge is utterly incinerated beyond repair.

Liv gets some sympathy from Ravi as they report to the latest murder- a client at the Scratching Post, or whatever Don E renamed it to. Apparently, one of the girls, “Bunny,” took the man back to her room, and hasn’t been seen since. The body was discovered by a very rattled waitress, Jane Harland. The victim is a PI known as Mick Chisel, no doubt a nod to famed PI Mike Hammer. Ravi gets excited about the noir feel of the case, and assigns everyone roles in the drama in his head. Clive, who apparently knew the deceased, warns Ravi to be careful what he wishes for. Ravi really should have listened.

The meal of the week is deviled eggs (Hard boiled detective, anyone?), and Liv slips into character, being helped by some blown lights at the station creating pools of shadow and light. While an atmospheric effect for the drama of the brain of the week, it also makes perfect sense that, in a city shut off from the rest of the world, they might well be running out of things like lightbulbs. Jane relates her teary tale, Liv spouts clichés, and a phone call derails her theory as soon as she voices it. Bunny, the missing hooker, is dead as well, and her time of death (improbably precise, as it is on most crime shows) pokes holes in Jane’s story. Of course, by this point, Jane is missing.

Back at the bar, Don bemoans the hassle Bunny’s death is causing. Blaine comes in to get caught up, and is surprised to hear Bunny, or Jane, might be a murderer. Darcy takes offense at the conversation and takes off. Liv puts in an appearance to narrate and make a drink before leaving. Don, usually one to take all this in stride, comments that Liv is bolting down whiskey at 8 AM. Ravi is doing an autopsy, and slips into his own noir narration, which is when Martin comes in, and wonders if he should leave. They talk chemistry, cures, Utopium, and Max Rager.

Liv is still obsessed with the case, Ravi is trying to say her father might not be all bad, and Peyton wants to drink. A lot. She has cleared out her office for her last day, and is not happy about anything. What does an ex-acting mayor do, anyway? It’s an odd thing to put on the resume. Blaine deals with some of his new supply issues, and tries to get thugs, Crybaby Carl, and Candy out from underfoot. His drink to relax gets interrupted when Jane shows up, pulls a gun, and also starts talking ala noir. Why, I’m not sure. Jane and Blaine talk, and tables get turned, situations reverse, and there’s some batting practice. Major gets updated on some odd keycard glitches at Fillmore-Graves, and has a lot of silence from the Joint Chiefs.

Liv stops by Clive’s office to voice a few more clichés, and complain about Clive going by the book. Next up is searching the PI’s office, which Clive is waiting on a warrant for. Liv, of course, doesn’t want to wait. Chisel’s office is on Spill Lane, likely a nod to legendary detective writer Mickey Spillane. At the office, Liv, Blaine, and some patrol officers have a series of unexpected encounters. Major notices something odd about a new janitor at Fillmore, and the man has a truly unexpected reaction to questioning.

Clive lectures Liv on what she’s been up to, and then Liv suddenly realizes something new about Blaine from last night. Blaine is brought in once again, and is just as unflappable and smarmy as ever. There’s a lot of verbal back and forth, more utter inappropriateness from Liv, and Blaine slithers out. Clive gives Liv some orders, which, of course, she ignores, true to the genre. Major follows up on the earlier weirdness, connecting it to the missing Inspector Enzo and an unexpected theft. Major, no fool, is realizing that someone else is out there, pulling strings behind the scenes. Martin uses his cage of Romeros as a demonstration for a new twist on the zombie issue, made possible by the right soda and a big-mouthed Medical Examiner. The Chairwoman of the Joint Chiefs spends some time with her grandson, and ends up watching some “Hi, Zombie!” It’s a nice little connection that may have a bigger and more important influence than Peyton ever hoped.

Don tries to call Darcy and work out what’s wrong, and gets no answers. Blaine stops in again (so much for lying low), to be generally annoying and insult Candy. He’s tracking down a lead and makes progress on the case in an unexpected direction. Peyton ponders other career choices while Liv does some deductive reasoning, and finally they both end up going back to the bar. Liv and Peyton, on arriving, split up to do intensive searching and karaoke. Peyton’s… memorable performance is applauded by Don and Candy (allegedly, the actress is actually a good singer and had to work at it to do what Peyton did). Blaine and Liv square off in the kitchen for a full-on full zombie mode beatdown. Peyton, meanwhile, deals with a heckler in a very direct fashion, which causes Don E some anguish for his karaoke night. Blaine gets some help from his resident muscle, and, just as things are looking bad, Clive and the cops charge in for a last-minute rescue. Blaine does something utterly in character but still a bit surprising (at least to someone) and we lose another character. Clive does Peyton a big favor in the aftermath.

The Joint Chiefs have their vote (why the military is voting on an important issue is never explained) and the Chairwoman ends up being tiebreaker. Mills isn’t happy with her decision. Ravi makes a request for the next certain type of girls’ night, and it’s amusing as usual. Liv suddenly realizes where the McGuffin for the episode is hidden, ends up being wrong, and then gets another clue. Candy gives Don some apparently heartfelt advice about his attempts to patch things up with Darcy. As she leaves, Liv, Ravi, and Clive stampede in, ignore Don’s questions, and find out that Blaine worked this out as well, but someone beat all of them. Another recurring character takes their leave, with a really nicely set-up camera shot. Don talks to Darcy, who shows she’s every bit as sociopathic as he is, and they take things in a new direction. Liv, Ravi, Peyton, and Major discuss recent events, and Ravi realizes how Martin played him. He and Liv make the utterly brilliant decision to go break into Martin’s place with no backup. They find a lot more than they bargained for. Their desperate search for a place to hide ends with them in a really ugly cliffhanger. The final scene of the episode is two really unpleasant bastards talking for the first time. I don’t think either of them realizes what they’re getting into.

What I liked: In addition to the usual clever banter, word play, and punny names, they did some great cinematography and effects on this episode. I’m really amused that things have gotten to the point that even people not on the current brain are joining in the genre. Maybe it’s contagious? Major is figuring out some important things, I just hope he’s not too late. Blaine is always entertaining, and Don E is becoming a real character, not just a hench-thug anymore. I liked Candy’s role this week. I don’t like most of the newer villains, but they are all slick. Karaoke night was fun. Darcy and Don were meant for each other.

What I didn’t: Not much, really. I have some questions, but none of them are necessarily plot holes, like does Mills know that’s his daughter? Does Dolly realize how close she is to getting her whole city destroyed, or does she just not care? Martin’s pushing things seems like it should have some serious ramifications, but maybe he has a plan we don’t know about.

It was a really fun episode on many levels. I’ll give this one a 4 out of 5. Only three more to go…