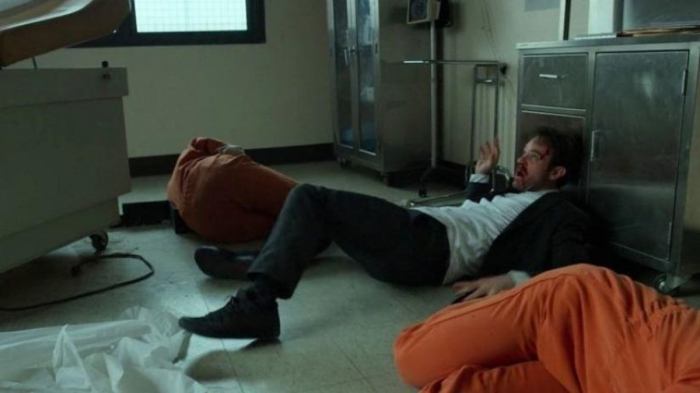 One of the things Daredevil has been great at is action. The fight scenes are done really, really, well, setting the bar higher for tv shows as far as I’m concerned. The realism they manage to capture, even with someone who is supposedly a master fighter like Matt used to be and is on his way back to, is very impressive. There’s a lot of that in “Blindsided,” a title with so many possible meanings given who the main character is and what happens throughout the episode.

Things start off with Fisk waking up and denying his guards some fun by being up, dressed, and against the wall when they storm in for a cell search. I don’t know if he was tipped off or they do that every morning, but Fisk was clearly ready. As Poindexter leaves, he glances back and sees Fisk watching him from the stairs in this weird penthouse/holding area. Matt goes back to his apartment for the first time in a while, and he can tell it hasn’t been empty this whole time. Matt changes clothes, leaves out some parts of his usual look, and catches a cab. Foggy rants to Marci about being ghosted by a ghost and not understanding what Matt is up to. Marci listens for a while, and the comes up with a unique suggestion on what Foggy can do to go on the offensive. It’s certainly an interesting idea.

Matt has the proceeds of one of his more dickish moves with Foggy, tells his ride to wait for him, then manages to bluff his way inside a prison. He only gets in because the guard at the gate violates procedure, but does so in a believable way. Matt meets with a former client of the Nelson & Murdock firm, and pushes on a few questions. The man not only doesn’t want to answer, he takes some fairly serious action to show he’s not cooperating. The prisoner gets taken away and Matt has to go deal with a checkup and paperwork before he can go.

Special Agent Ray Nadeem is hard at work, dealing with everything Fisk is giving him. This has been taking a toll on his personal and family life, as we see when his wife pays a brief visit. While Matt is left waiting at the medical unit, Karen is hard at work untangling the web of financial games Fisk has been playing. Foggy stops by and shares the news of his recent visitation. Karen, furious, goes to Matt’s place, ranting about his promises to stop lying. They don’t find Matt at home, but do see he’s been there.

At the prison, there’s a lot of chaotic action coming up, but the fact that you can’t quite tell what’s going on is believable considering what’s happening. First up, Matt gets a visit from a nurse who is clearly not following the Hippocratic Oath. After round one, Matt gets a phone call, and he and Fisk have a chat. Clearly, Fisk is enjoying privileges he should not be, but that’s nothing new. After Fisk taunts and explains why he’s going after Matt, there’s a lot of fighting. It’s ugly, brutal, not at all a graceful martial arts demonstration, and it works. During a sort of intermission, Matt ends up finding who he wanted to see, and they have a very intense talk. They don’t like each other and clearly aren’t on the same side, but they have a common enemy and proceed on that basis. Matt asks some very good questions that I’m wondering about myself. Matt also learns some very important details about recent events and gets some help getting to the gate and out of the chaos the prison has descended into. He makes it to his cab and collapses, suffering various after-effects.

Fisk gets a meal delivered, and the agents who check on the food are being abusive and doing things that would get them in a lot of trouble if any supervisors saw it. I suspect this area doesn’t have cameras, which might come up later. Gleeful, Poindexter and his co-conspirator watch the monitors for Fisk’s reaction, and are very disappointed, although Poindexter at least admits his surprise. Poindexter’s day gets worse when the Office of Professional Management, sort of Internal Affairs for the FBI, comes by to interview Fisk about some of the events of the big motorcade attack. Ray, too, breaks the rules and passes on some information he’s not supposed to. I have to say, the FBI isn’t coming out of this one looking that great.

Foggy crashes a special event and finds Mahoney, a cop we’ve seen many times before in the series. Mahoney isn’t happy about Foggy being there, and tells the lawyer to take off. Instead, Foggy takes a big risk and goes ahead with Marci’s idea. It’s very touch and go, but he starts getting some support and I think he’s more surprised than anyone. He definitely knows how to play to this crowd on the issue at hand. Karen stalks down the street, fury radiating from her, and comes within a hair’s breadth of following in the footsteps of a different vigilante we’ve seen her work with.

Ray is troubled by earlier events, and asks for some advice from his boss, Tammy. She has some experience in this area, and doesn’t tell him what he expected to hear, but it’s decent advice given the circumstances. We do find out where both of them come down on lying to their kids. Karen pays a very unprofessional call on a contact, and is ridiculously pushy. About the only thing she does right here is say that her editor (for now), Ellison, had nothing to do with this. She does get a name, finally, and leaves just before she probably would have been arrested. Poindexter, or Dex as his coworkers call him, sends the other agent on duty out for coffee. This is usually a prelude to something really bad happening in this kind of circumstance, but Dex is looking into something that happened earlier, and gets a big surprise from Fisk. Baffled and angry, although the second seems to be his default state, Dex storms in to Fisk’s room and demands answers. Instead, he gets the usual head games from Fisk, and isn’t really equipped to handle them. The episode ends with Matt’s cab ride not going as planned.

What I liked: The fight choreography continues to be brilliant on this show. Matt is asking the right questions, although I disagree with just about everything else he’s doing. Fisk is a very smart man and is doing exactly what he needs to be in his current circumstances. Marci’s idea was brilliant, and Foggy is running with it. The people breaking the rules, while they shouldn’t be, do it in a believable manner.

What I didn’t: I commented in previous reviews that Matt is being dumb about his gloves. Now, he’s on camera doing things a blind lawyer shouldn’t be able to. If there were going to be another season, I’d be worried about the sustainability of this kind of action. Fisk, while smart and connected, is seeming just a bit too all-knowing here. Matt is still being a dick in all his personal relationships. I don’t like what Dex and his buddies are up to.

I’ll give this a high 3.5 out of 5. There’s a big conspiracy going on, and we’re only seeing small bits of it so far. I can’t wait to see where this goes.