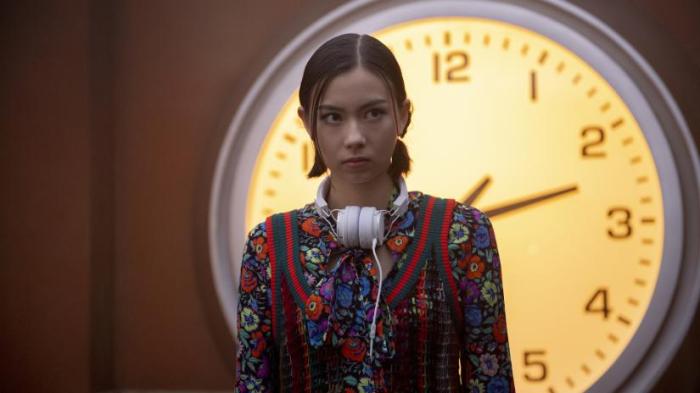 Time for a new character

After a longer than normal break, Fox’s Legion returns for its third and final season. The show remains just as surreal as it has been the last two seasons, although with a major status quo change. As seen at the end of last season, David Haller has not only cut ties with Division Three, but he’s being hunted by them. For reasons I don’t recall and quite possibly didn’t make sense anyway, Amahl Farouk, who has been the villain for the first two seasons, is now working with the Division, so he and David have essentially changed places. With that, we start the not really creatively named Chapter 20.

Not wasting any time jumping into the deep end, the show starts with an old-fashioned test pattern like you used to see on tv stations when they went off the air for the night (Yes, that used to happen. Yes, I remember it. Yes, I’m old.). This one bears the odd message “Bedtime is here.” When we’re done sort of watching tv, the focus shifts to a new character we’ve never seen before. She’s a young Asian woman (I think Japanese, but I’m not entirely sure) who is listening to a how-to instructional recording on headphones. The lessons are about time travel, but initially give generic, feel-good advice. She has dinner with a man who is presumably her father, but he’s not actually there.  A butler pushes a tv to the end of the table, and we get what seems to be a late 60’s version of teleconferencing. I don’t know how he hears her, since we don’t see a camera or microphone on her end, but they have a short conversation about her grades before he ends the chat.

The woman drifts through at least part of a day, going to classes while still listening to her headphones about time travel. She sees a few recurring symbols and other odd events as she moves through the city. Once home, she gets an idea and tunes in to a specified frequency on an old radio, and hears some odd instructions. The end of them switches from an unknown woman to recognizably David’s voice. The woman roams the city, finds various signs and hints, follows them to a door, and goes inside. There, the setting is a surreal (I know I use the word a lot, but I’m really not sure what else to call it) dry cleaners. Many rolling racks come and go in an otherwise blank white space, and give her an instant wardrobe change at one point. She finally gets her point across and ends up in a very 60’s cult-like place.

She is welcomed and guided along to a room and told the others are doing the bidding of a queen with a certain title that’s familiar from last season. She’s brought to someone called the Alchemist, who talks in vague and trippy ways. She is dubbed Switch, which is the first time our main character this episode gets a name. A familiar character eventually shows up, and they negotiate a few things. Eventually, Switch is brought to a cavern with sun coming down from above that looks familiar. Finally, she meets David, the titular character (although he’s never called Legion in the series). David calls himself the magic man and lays out a few rules, mentioning that he no longer trusts people, but reads their minds instead. He also shows Switch a bit about creating mental spaces. They swap odd stories of their pasts, and you can’t blame Switch for not believing the story about psych wards, mental possession, and evil bodiless entities.

Outside, although not the outside we saw before, the Alchemist rests on a porch, sitting up straighter when he sees a flicker of movement. A hook, like an old-fashioned vaudeville one for pulling acts off stage, comes out of nowhere and yanks him off screen. This is our notice that Division Three has arrived. David and Switch’s conversation about time travel gets interrupted by the appearance of a drone, a flashbang of some kind, and a lot of riot troops led by a sword-wielding Kerry. There’s a short, ugly fight with a lot of fatalities and then Switch makes a portal and gets away into a hallway with giant signs labeled different time periods like “20 Minutes Ago” or “4 Hours Ago” or things like that. The instructions are back, with various guidelines as she looks around her corridor and the settles on a time frame. Once again, she meets her earlier guide, talks with David, and then Division Three attacks. Once again, it’s an ugly scene, and Switch flees. This time, though, instead of going back in time, she ends up in the astral plane and has a chat with Farouk, who accuses her of cheating. Coming from him, that’s rich. They have a talk, and Farouk tries to be gentle and charming, but Switch, still remembering the two brutal battles she’s seen, isn’t in a trusting mood. Much to Farouk’s surprise, Switch manages to get away.

This time, the jump back shows Division Three’s preparations for the battle, and we get to see many of the characters we’ve known from the last few seasons. Ptonomy’s odd situation from last time gets improved, if not exactly restored to what he used to be. Cary and Kerry talk about new projects and testing reflexes. Agent Clark is arguing with a man I don’t think we’ve seen before about budget issues and the possible end of the world. Farouk shows up and warns them David has a time traveler, although how he retains the memories of what’s happened and been undone I’m not clear on. The team gets alerted about David being located, and Clark votes for a simple, if extreme, approach. He gets over-ruled and the team prepares to go fight David (again, although they don’t know that).

The team has some good ideas about how to battle someone of David’s considerable power, and Cary has come up with a lot of gadgets. Farouk briefs Syd, who was part of the earlier battles, and tries to get her to sit this one out. Everyone is about to move in, the Alchemist gets hooked away again… and then things go differently. Maybe Switch got a warning through with enough time for David to act on it this go around. At any rate, the episode ends with some very different circumstances than we’ve seen so far, the big battle doesn’t happen, and Division Three is left wondering what I often am after watching the show: What the hell just happened?

What I liked: While just as weird as the past episodes, Switch’s story was different enough to be a bit more engaging. I liked her scene with her guide, and I’m intrigued by how her power works. Cary had some good toys to take down David. I’m glad Ptonomy has been rescued, more or less.

What I didn’t: It was long enough ago that I can’t recall why David and Division Three had their major falling out, and of course, something like a recap is below the arty feel of this show. I don’t like seeing David as the villain (although we don’t see him do anything overtly bad in this), and I’m sorry to see him working against Division Three. I guess the original Summerland crew, like the Doctors Bird, aren’t around anymore. After all he did before, I’m really struggling with the idea of Farouk being accepted by Division Three as an ally and even full team member.

I had decided to give up on this show, but when I heard this was the last (and short) season, I decided to come back for it. I’ll give this a 3 out of 5. We’ll see how this conflict twists and turns over the next several episodes.