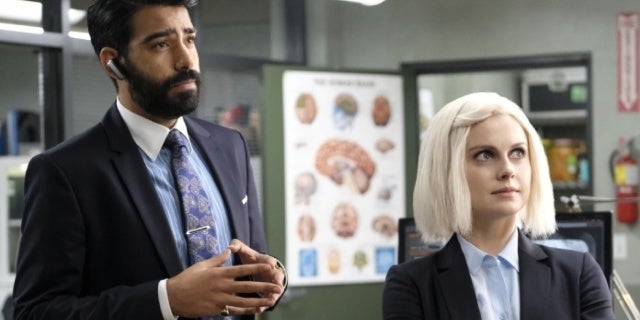 It’s rare that I want to smack both of these characters, but…

For the last few episodes, they’ve dialed down the new brain quirks, which I’ve actually appreciated. Not that Rose McIver doesn’t do a great job rolling with whatever Liv has become each week, because she does. I just have enjoyed that being a less important part of the story. Well, this week the brain bits are front and center as the writers give a nod to the classic Arthur Miller play with “Death of a Car Salesman.”

The show jumps back and forth a bit as we get to see more of the elusive Beanpole Bob, chemist to the drug dealers, and the origin of the zombies in Seattle. The first such flashback is five years ago, as we see Mr. Boss and Beanpole talking about the new drug Utopium. One year later, there’s a very unexpected development as Bob tries some of his own product.

In the now, picking up with last episode’s cliffhanger ending, Liv has met her father, Martin Roberts, who just happens to be the head of the zombie faction making life harder for pretty much everyone in Seattle. They do a slight bit of catching up before Liv is called away by work, but set up a later meeting. Liv fills Clive in about her father developments, and he is sympathetic. Ravi greets them with some odd claims about a sandwich, and we find out Ravi is having his monthly side effect. This leads to both Liv and Ravi eating the brain of this week’s victim, a very obnoxious car salesman. We also get introduced to the subplot of ticket sales for the annual (although I don’t think we’ve heard about it before) police raffle. The posturing and one-upmanship begins almost immediately.

Clive is interviewing the widow of the deceased when Liv and Ravi descend on him in all their irksome glory. The change is so pronounced, I sort of wonder that the widow didn’t see some similarity with her dead husband. We do learn the method of death, which is an unusual one. The wife isn’t pleased with her husband’s workplace, and talks about how horrible it was. Vampire Steve shows up with some news, listens to the new Liv and Ravi for a bit, and gets sick of them quickly. Clive, too, walks off, no doubt hoping for a speedy passage for this brain’s effects.

Don E goes to check up on Blaine, who rewards his underling with a moment or two of actually being nice before reverting to his usual, obnoxious self. He’s made a few changes since getting his most recent influx of money (Blaine’s fortunes do rise and fall on this show), and Don gets aggravated before leaving. Elsewhere, a doctor going about his day gets a big surprise from a new patient. Ravi and Peyton discuss the upcoming summit, Seattle’s tenuous future, and there’s more about the raffle tickets.

Liv and Major talk about the chances of the summit working, and Major is worried about the missing Sloane Mills, daughter of General Mills (the one that wants to nuke Seattle, not the cereal company). Ravi and Peyton join them for the premier of “Hi, Zombie,” the new online sitcom they hope will improve Seattle’s chances of surviving. The dignitaries from Washington, DC arrive, with security attended to by Fillmore-Graves. Many of them look displeased as Major makes his pitch for a zombie island, the first we’ve heard of this plan for a few seasons. Didn’t it get bombed a while back?

Blaine has a meeting in his office with Dalton, the occasionally appearing drug dealer. Dalton is still on his neuro-topics kick, but Blaine makes him an interesting offer. Back to flashback land, 4 years ago, Scott E goes to pick up drugs, can’t find Bob, and brings drugs out to his brother Don and to Blaine. Don and Scott have very different opinions of Blaine. Ravi and Liv, now decked out in power suits, duel over saving lives. Mercifully, Liv’s father comes in for their coffee date and breaks up this silliness. Ravi tries to pursue another lead and gets some unexpected results. Liv and Martin talk about her history, his past, and learn they have more in common than Liv thought. She also discovers a far less enjoyable thing about him, and walks off.

Peyton and Major keep the summit running, and she announces the lunch break. Major has an encounter with General Mills, who isn’t happy about several things. Someone’s absence may have a big effect on Seattle’s future. The squad room is overrun with car salesmen as the victim’s coworkers turn up to get interviewed. Most of them come across fairly slimy. They interview the boss, a coworker, and hear how high-stakes and cutthroat the dealership is. Liv gets a new lead via the ol’ zombie vision. Blaine hosts a meeting for his new venture, and really doesn’t seem to be able to fathom why some of the contractors have objections to this new plan.

Liv talks to Clive about some of her concerns regarding her father. They meet Jack, a former employee of the car dealership, and Emily, his very outspoken daughter. Unlike the slimy attack dogs at the dealership, Jack seems happy and relaxed, answering their questions and giving them some more information to consider. Blaine is not impressed with the new zombie comedy, and then meets up with Darcy, the Freylich kid he made a deal with. He’s worried about someone looking for her, then relaxes a bit when he realizes who it was. Darcy is bored, and Blaine makes a suggestion.

Clive suffers through more of Liv and Ravi’s new selves this week, and gets a bit of information from Ravi’s vision. Ravi ends the ticket competition, or at least tries to. Don is suffering through some of the less-glamorous aspects of his job when he meets Darcy and starts acting very un-Don like. Things get a bit odd, Don makes an assumption or two, and Candy tells him something he didn’t want to know. Clive believes he has solved the case, and makes both Liv and Ravi wait behind while he goes to make the arrest. There are a few interesting background revelations, and then an unlikely confession. Unlikely to the point that I’m not sure I believe it, even though Clive calls in some expert advice about the technical aspects. Inspired by some of what she sees, Liv makes another effort with her father.

The obnoxious General Mills narrowly avoids something he’d truly hate, but a Senator isn’t so lucky. We see more of Martin’s still-nameless faction’s plan falling into place. Don and Darcy have some interesting moments discussing music and bucket lists, as well as something from a recent episode. Liv and Ravi finally come down from their brain issues, have a nice bonding moment, and then get a surprise about the ticket sales. Clive seems amused at the new developments as he walks out. Martin ends the episode by watching a documentary and discussing their future with the liberated and thawed Inspector Enzo.

What I liked: Don E is finally developing more as a character, and I’m enjoying it. They’re clearly building up to something with Beanpole Bob. I’m not sure what it is, but it should be a fun trip. I’m not sure about the resolution of this week’s case, but it was well done whatever the truth. I feel bad for Liv and the heartbreak to come. Liv’s defense of Herbie versus Christine was entertaining.

What I didn’t: Liv and Ravi were amazingly annoying this week. Kudos to the actors for some great performances, but I didn’t enjoy them at all. Blaine is losing some of his charm but none of his obnoxiousness. I’m really worried about the after-effects from the summit.