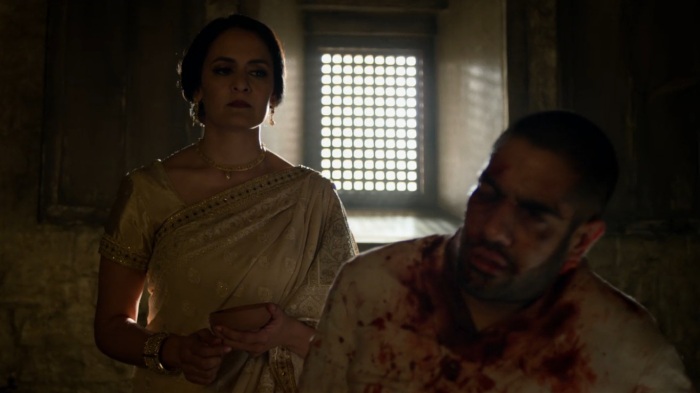 Iron Fist hits the halfway point of the season with “Heart of the Dragon.” Again borrowing titles, this is from a comic back in 1974 which was Iron Fist’s second appearance. It shows the aftermath of last episode’s ritual, and our hero has a really bad day. There’s also the time-honored trick of showing a character’s motivations via flashback, and my least favorite character gets a decent scene.

Davos, like a kid with a new toy, wants to play with the stolen power of the Iron Fist, and goes to try it out, ensuring a wall knows who’s boss and actually wearing the mask we pretty much never see on the titular hero. This leads to some flashbacks of Davos as young man, with an equally young Danny. Their brotherly banter gets interrupted when Priya, Davos’ mother, comes in and shows who the harsh disciplinarian in the family is. She’s not warm and fuzzy, Priya. Snapping back to the present, Davos hears a commotion in the street and decides to follow Danny’s heroic career, albeit more brutally. Easily beating some Golden Tiger thugs, he asks the person he rescued where to find more and gleefully goes on the hunt. The rescued man asks who he is, and Davos gets one of Danny’s often repeated lines from season one and The Defenders.

At the loft, Colleen is worried about Danny, and Misty tries to help, showing her detective skills. Colleen fills her in as much as she can, and Misty reassures the worried martial artist. There’s some talk about Mary, and a possible clue that never gets followed up on. Misty explains why she has the time to devote to this, which ties in nicely with the end of Luke Cage. Mary dumps a very battered Danny on a bench, wakes him up, and leaves him there after making a recording. Mary takes off, and Danny eventually manages to stumble along.

Mary, or Walker in this mode, isn’t one to waste time, and goes straight to Joy, showing the video and asking for payment, pushing aside Joy’s stalling. Walker is as nice to Joy as her issues allow, and Joy is pretty clearly having some buyer’s remorse. They talk a bit, and Walker leaves some precautions. Since Joy did her something of a favor, Walker even offers some advice about Davos. Walker leaves, eagerly awaiting word of her payment.

Colleen and Misty meet up with Ward, who recognizes Misty’s name and talks about her arm. They tell him about Danny being missing, and he at least recognizes the seriousness of the situation and takes it seriously. They ask him a favor, and he agrees. After he leaves, Misty and Colleen talk about Ward. He did not make a good impression. Danny staggers around and shows he was hurt worse than I, at least, thought. Proving New York is a small town in some ways, he somehow or other manages to run into Ryhno and his band of lost boys. They decide to take advantage of the situation, and Danny is not up to the fight.

Davos follows his man’s information and goes to the club where the Tigers hang out. He is ruthless, dispatching several guards and then turning the power of the Fist directly on someone, which we’ve never seen Danny do to a non-powered man. There’s a reason for that. The last man standing, terrified by Davos’ Punisher-style justice, suggests an arrangement. Davos agrees, and leaves to deal with a message from Joy.

Back in the K’un-Lun of flashback time, Davos suffers after the duel he lost to Danny. Priya comes by, showing more of her “motherly sympathy.” I generally don’t have a lot of sympathy for the villains, but I see how he got this way. Danny wakes up, chained to a pillar, while the Ryhno band of delinquents debate what to do with him. They disbelieve his offer of money, and try to make a deal with the Tigers. Danny makes a shattering discovery after his attempts at negotiation fail. Misty and Colleen hit the streets, getting no results. Colleen is having some serious guilt issues, and Misty takes a simple, pragmatic approach to help her. Their friendly banter ends when Misty’s radio alerts them to a 616 call, someone with powers. In the comics, 616 is the number of the “main” Marvel Earth.

Danny tries more negotiating with BB, and doesn’t get anywhere. He’s also looking worse. BB is torn between helping and playing tough guy. Joy and Davos have a chat, and she’s clearly not happy about the direction things are taking. They have some very differing views and goals. As Davos leaves, we get more of a flashback, this one to just before he leaves K’un-Lun looking for Danny. His mother comes across as a bit more human in this one, at least. Misty and Colleen get to the club and it’s a mess. They find and hear enough to be sure this wasn’t Danny, but that doesn’t help them find him. Colleen gets a call tipping her off to where the missing hero is.

Team Ryhno is having problems dealing with the Tigers in the wake of Davos’ visit. Danny tries both more bargaining and fighting, and neither goes well. They are about to do something fairly horrible when Colleen and Misty come in to save the day. Things get tense, but the heroes get out without major incident, and Danny catches them up on what happened. They at least mention getting Claire to help him, but opt not to use her for reasons never explained (I miss Claire). Eventually, they get him back to the loft and Ward arranges for his sponsor/lover Bethany to come help. It turns out she’s a doctor, which is helpful. She’s not happy about all this, but does what she can and has a serious talk with Ward on her way out. Misty and Ward compare notes on Mary Walker, and get some useful things sorted out between them. Since everyone agrees Joy isn’t likely to answer a call from Ward, Misty and Colleen go to see her, leaving Ward to tend to Danny. Joy and Mary talk payment, problem solving, and simplicity. This is another conversation Joy doesn’t enjoy.

Ward and Danny have a serious talk about what’s happened to Danny. Ward is surprised by the story, and then has a revelation about his own problems. It’s actually a nice scene between them, and Ward comes across as much less of an asshole than usual. Joy and Mary almost finish up their talk when Colleen and Misty come calling. Joy tries lying and stalling, and both fail. The two end up inside, and Joy ends up acting like the stereotypical entitled white woman, shocked and appalled when she sees the actual consequences of some of her actions. After an impressive fight, Misty and Colleen manage to capture Mary.

Ward and Danny talk about their parents and stories. Danny reaches out to Ward, who accepts in his own, screwed up, closed off way. They share a good laugh and Ward talks about his uncertainly in the emotional arena, while Danny relates stories from his time in K’un-Lun. Their moment ends when Misty and Colleen return with Joy and Mary. There’s some tense conversation and a confession that shocks Danny to wrap up the episode.

What I liked: Mary got a lot more interesting this episode. It was nice to see Joy isn’t as far gone as she seemed at one point. Ward had a few good exchanges. Misty and Colleen make a great team, which they are in the comics. It’s interesting seeing Davos’ version of what Danny’s been doing. I don’t think Matt Murdock would be happy.

What I didn’t: Aside from Rosario Dawson not wanting to come back/being too expensive, I don’t get why they didn’t use Claire here. Ryhno is just a foolish character who is going to get in over his head really, really quickly. The Tiger/Hatchet war is going to be a lot more complicated now. I really didn’t care for the flashback scenes, enlightening as they were.

At the halfway point, I’ll give this one a 3 out of 5. I hope Danny gets himself together soon.